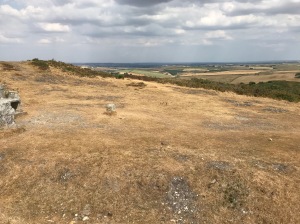 Parched acid grassland on Black Down, in the centre of Dorset AONB ©Miles King

While supporters of the Corbyn Project continue to search their souls for reasons why Labour now has the smallest number of MPs since before universal suffrage, I thought I  would commemorate a small but significant anniversary – it’s 70 years today since the National Parks and Access to the Countryside Act was made law – by the most Socialist Government this country has ever seen.

The 1949 Act, as its known in the trade, introduced National Parks and the first nationwide right of access to the countryside (as the name would suggest). But the act also created Areas of Outstanding Natural Beauty (AONBs) and National and Local Nature Reserves (originally just called Nature Reserves). Almost as an after thought the Act also introduced the concept of Sites of Special Scientific Interest (though back then they were areas of special scientific interest). A National Parks Commission was created to oversee the creation of the Parks adn AONBs. And something called the Nature Conservancy was created – mainly to look after the Nature Reserves – and if they had any spare time to look for areas of special scientific interest, draw some rough boundaries on a paper map, write a sentence of two as to why they are interesting (for scientists of course).

But things were so different in 1949 that the Government didn’t feel it necessary to inform landowners that their land was of special scientific interest, only the Local Authorities. What the LA’s were supposed to do with this information is unclear, but it does give an idea of how things were viewed back then. There was no sense that all of this wildlife was about to get swept away as a result of the food policy and consequent subsidies provided by two separate acts – the 1947 Agriculture Act and the 1946 Hill Farming Act. Joined up Government didn’t exist back then either, although there is a single line in the Act which states that whatever the National Park Commission or Nature Conservancy (and Local Authorities) might wish to do, they must  to “have due regard to the needs of agriculture and forestry”. That means they had to bear in mind that Agriculture and Forestry come first.

There’s no question that this was a visionary piece of legislation and it set the foundations for everything that would come afterwards. What it singularly failed to do was to prevent the catastrophic loss of wildlife (and landscape character) that was to come in the following three decades. While lines were drawn around National Parks, AONBs and areas of special scientific interest, there was little to stop the landowners from carrying on and doing what they wanted. Or rather doing as the Government instructed or encouraged (via generous subsidies) them – whether that was ploughing up down and meadow to sow the newly-created wonder-grasses or cereals; or planting up heath and moor; wood and forest, with conifers. The 1947 Town and Country Planning Act in combination with the new Parks and AONBs legislation did prevent urban sprawl from spreading into them, but did nothing to stop the bulldozer and the plough, or the ever increasing number of sheep on the hills.

Despite the repeated protestations that the law was failing in its avowed intent of protecting our flora and fauna and the places they lived, nothing serious was done until 1979. Thanks to our joining the EEC (yes the irony should not escape anyone), as it was then, we were legally obliged to implement the EU Birds Directive. This led to the next most important piece of UK wildlife law – the 1981 Wildlife and Countryside Act. There was  the most almighty row as  farm, forestry and landowning vested interests sought to prevent any change from taking place ie to provide actual protection for those SSSIs. It was at the time the most heavily amended piece of legislation ever to pass through Parliament and I don’t know whether that record has subsequently been broken. Even after the Act was passed it was so flawed that it gave landowners free rein to embark on a further period of intensive destruction until an amendment was brought in, in 1985. The Nature Conservancy Council, then sent out its officers to find out what had happened to all those paper protections afforded following the 1949 Act. Sadly the original series of SSSI maps has not yet been digitised and made publicly available. But I have seen some of them for Dorset when I worked at English Nature. It would make a sobering study.

When the SSSIs were “renotified” in 1985 and 1986 (a euphemism as the original notification was only to the Local Authorities remember), in a heroic project carried out in the teeth of landowner opposition by a very small band of civil servants, what they found was shocking. Many sites had been lost, were heavily fragmented, or so badly damaged that there was nothing left to protect. But further damage had been stopped – and since then very few sites have been completely lost (mainly to infrastructure development like roads). Of course the quality of those sites has continued to decline in many cases, but that’s another story.

So 70 years on we stand at another crossroads in the history of nature protection in the UK – but it’s as though someone has turned the finger post around and we’re heading back to where we came from. Forty years of EU membership has provided a whole additional layer of protection (and funding)  – creating our Special Areas of Conservation and Special Protection Areas. All but a few anomalous sites are SSSIs under their EU protection – and it’s worth remembering that when the Habitats Directive was enacted in 1992 (partly thanks to Boris Johnson’s dad) the UK originally stated that they didn’t need to do anything about it because SSSI law already gave the sites all the protection they needed. It took a lot of campaigning and legal action to make them change their minds.

It seems to me inevitable that these additional EU protections will be stripped away before long – aside from anything else that protection was rooted in the threat of the UK being taken to the EU court and given massive fines which they couldn’t wriggle out of. If the laws creating additional protection for European Sites stay on the statute book, they’ll be a useful as those original SSSIs were back in the 1950s ie paper protections.

UK conservation professional, writing about nature, politics, life. All views are my own and not my employers. I don't write on behalf of anybody else.
View all posts by Miles King →
This entry was posted in national parks and access to the countryside act, SSSis and tagged Attlee Government, national Parks, SSSIs. Bookmark the permalink.