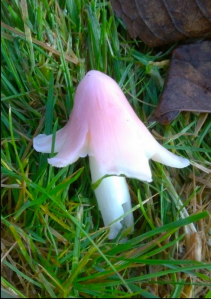 This Natural England press release has just been published:

Some of the country’s rarest and most threatened fungi will be better protected after Natural England announced the notification of two Sites of Special Scientific Interest (SSSIs). 2019 marks the Government’s Year of Green Action, a year-long drive to help people to connect with, protect and enhance nature. This doubles the number of sites chosen for designations specifically for their fungi. These two new SSSIs provide protection for over 70 additional hectares for important and spectacular fungi, as well as nationally important grasslands and meadows.

The first site is Dorset’s Down Farm, an eight hectares site near Beaminster and home to a nationally important assemblage of grassland fungi, in particular a rich variety of waxcaps and clubs, corals and spindles. These fungi thrive in traditionally managed grasslands and Down Farm’s richness is testament to the careful stewardship by the land owner.

Andrew Smith, Natural England’s area manager for Dorset said: “This Site of Special Scientific Interest designation is a reflection of how rare and special Down Farm is as a place for nature. “The traditionally managed hay meadows support a rich flora. In spring there are thousands of the much declined green-winged orchid. In autumn, the grasslands are equally colourful and spectacular with waxcaps, corals, spindles and club fungi. “This ‘waxcap’ grassland in west Dorset is now recognised as being of national importance.

Notifying the meadow helps safeguard these important natural features that the land owner has nurtured and cared for so well through traditional hay meadow management. Natural England is delighted to recognise the owner’s good work and looks forward to this spectacular place being cherished long into the future. “Natural England, and the many people and organisations we work with, are so pleased we can take this important step to ensuring this site has a secure and healthy future. We are grateful to the owner of the meadows and to our partners who have worked with us to establish this designation.”

The second notification is The Leasowes in Halesowen, an area of 63 hectares in the borough of Dudley near Birmingham and one of the best sites in England for its spectacular displays of grassland fungi, including an amazing 28 species of the brightly coloured waxcap mushrooms. The citrine waxcap, which is on the International Union for Conservation of Nature’s global red data list – a list of species at threat of extinction – was recorded at The Leasowes in 2017. Pink, golden and parrot waxcaps are amongst the other species spotted at the site off Mucklow Hill.

Emma Johnson, Natural England’s area manager for West Midlands said: “England’s Sites of Special Scientific Interest are essential to look after the very best examples of our precious natural heritage and wildlife for generations to come. We are delighted to designate the rare species-rich pastures and grassland fungi at The Leasowes. “It is a great example of how urban sites can hold nationally significant habitats, providing a wonderful place for both people and nature. The designation is a timely recognition of all of the management and conservation work that has gone into the site by wardens, golf course managers, volunteers and community groups over many years. “We see the designation as an important step in making sure the place is enjoyed and thrives well into the future.”

SSSIs protect the very best examples of our precious natural heritage and wildlife for the future. Natural England plays a pivotal role in designating these sites, monitoring and reporting their condition and advising landowners on their management. These notifications take the total number of English grassland SSSIs selected for fungi up to four. The Joint Nature Conservation Committee has recently published new guidelines for the selection of SSSIs for fungi which were used for the first time in the selection of these sites.

Tim Wilkins, Natural England’s Senior Specialist in fungi, said: “There are very few grasslands in the whole of England that support such a spectacular array of fungi. This reflects the great antiquity of the grassland at The Leasowes, all the more remarkable for its proximity to the Birmingham conurbation. “As well as the colourful waxcap mushrooms, the site is also important for its fairy club fungi and earth-tongues. It’s great to know that this site and its wonderful fungi will be preserved for current and future generations to enjoy.”

Dr Martyn Ainsworth, Research Leader in Mycology, Royal Botanic Gardens, Kew and co-author of the new guidelines for the selection of fungal SSSIs, said: “It is just brilliant to see two more English SSSIs notified for their spectacular and enigmatic waxcap grassland fungi, which are in general decline right across Europe. “It is especially encouraging and uplifting to note that these designations have occurred so soon after the publication of the new guidelines for selecting such important fungal sites.”

I am often quite critical of Natural England – but this is news that is worth celebrating. It shows what Natural England can do, and that protecting nature with the laws that we already have, can be done successfully, working with landowners.