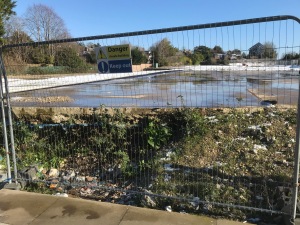 Following on from my general critique of the Net Gain proposals, here are a few specific comments in case anyone is thinking about responding to the consultation before the deadline of the 10th February.

1. On page 6 of the consultation Defra proposes populating the standard biodiversity metric using surveys from consultants working for the developer. Can anyone see a problem here? Who checks whether the consultants have accurately and objectively mapped the resource? Call me a cynic but I would have thought it’s in their and their clients interests to minimise the existing value of the resource – saves on time and money.

2. As soon as I saw mention of “Habitat Creation Markets” (Page 35) my heart sank and I was reminded of George Eustice’s dream of tradeable biodiversity credits. Let that dream go, Minister. It also reminded me that the Environment Bank was merrily proposing biodiversity offsetting at Lodge Hill, even while it was being designated as a SSSI.

The government will only mandate biodiversity net get if it is satisfied that it will deliver benefits for development, including greater certainty and process cost savings

I wonder whether this is really the right place to start thinking about the principles for Net Gain. Had one started from the position of “how can we end up with more wildlife than we started with”, rather than “how can we make it easier for developer to build market housing”, I might be prepared to be more positive about it.

4. Might funding via the tariff only be channelled into replacing other sources of public funding which have been cut? What about funding for existing local parks and other open spaces where LA funding has been starved? Would this be real net gain or merely robbing peter to pay Paul.

5. There are plenty of nods to the mitigation hierarchy, which were welcome. But I did wonder to what extent these were providing cover for the more hard-core natural capital approaches being advocated.

6. The Natural Capital Committee was very critical of the Net Gain proposals, in particular querying why only Biodiversity was being considered, and not other aspects, such as water quality, carbon sequestration etc. One reason may be because biodiversity is, even in Natural Capital Accounting, often assigned a zero value (thus blowing a massive hole in the NC philosophy), whereas economists have found it easier to price the value of flood reduction or carbon. I’m not making any comment as to whether I agree with the approaches they have taken to create these prices.

7. In this context I was interested to read that Natural England is developing an “eco-metric” designed to show how much value a wildlife habitat delivers to society in terms of its ecostystem services (page 18). To which my responses is…. arghhh.

8. Another interesting point made in the Natural Capital Committee response was that they questioned why Net Gain was only measured from a base-line of what the current value of a site was; and why there was no consideration of potential value of a site. It also occurred to me that if business as usual land-use practices were contributing to ongoing net loss of wildlife from eg farmland, how this would be factored in. When and how is the base-line to be set, using what data?

9. It’s not as though the base-line is level at the moment. Net gain has to be set against ongoing net losses. So part of the net gain only really addresses the continuing declines. That’s a big hurdle to get over in the first place. Also historic activities which have stopped, are continuing to have an impact eg historic Nitrate fertiliser use causing water quality pollution decades later.

10. Defra’s ambition is for a 10% gain (in terms of Biodiversity Units). Would this even be enough to address the ongoing declines?

11. The Net Gain consultation proposes excluding alterations to buildings – what about roof-dwelling bats?

12. There is also a proposal to exclude developments of less than 10 homes or 0.5ha. Given how small some surviving wildife sites are, there should at least be some mechanism to check whether a small site is nevertheless valuable.

13. The Proposal to exclude all brownfield sites from the Net Gain requirement really does seem like madness to me. Both Lodge Hill SSSI and Rampisham Down SSSI were brownfield sites when they were designated. And Brownfield sites often have far more wildlife value than farmland, precisely because they have not been soused in Nitrogen and Phosphorus for the past 50 years.

14. The proposals include excluding any consideration of species interest on a site, other than Great Crested Newts (which are to be dealt with using the area licence approach.)

15. Why put a time limit (eg 25 years) on Net Gain? How does this make any ecological sense?

within the Net Gain consultation only Ancient Woodland (which is not a habitat but a historical category) is mentioned. Lowland heathland or ancient pastures like chalk downlands are not mentioned, although they would fit the broader definition in the NPPF.

1 Response to further thoughts on the Net Gain consultation