Did Socialism kill off Mrs Tiggywinkle? 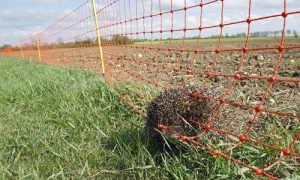 Hedgehogs are back. Well, when I say they are back, they aren’t back. They are disappearing rapidly. But they are back in the news. Perhaps this is just a valiant effort by a few newspaper editors to keep former Foreign Secretary Boris Johnson away from the public glare he clearly so desperately courts … even if just for a few hours.

A Guardian story  has revealed the findings from a major survey which looked at hundreds of rural locations across England and Wales. The researchers were specifically looking at the relationship between badgers and hedgehogs. What they found was astonishing. Only one in five of the 261 areas searched showed any signs of hedgehogs at all. And none were found anywhere in south-west England.

This is not to say that hedgehogs are extinct in the south-west. But it does mean they are in perilous danger of becoming so – at least in the countryside. We have hedgehogs in our back garden in Dorset, and they are doing ok in other parts of Dorchester, but can we really accept that our humble hedgehog must be renamed the Gardenhog? The Telegraph and Mail also covered the story, with the Telegraph misrepresenting the research.

The Telegraph, true to form, blamed the demise of hedgehogs on badgers: “Hedgehogs are disappearing…into badgers’ stomachs” they shrilled. 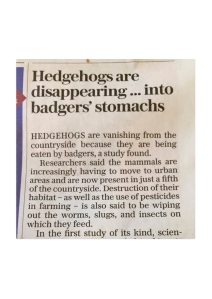 Badgers do eat hedgehogs, there is no question of that. But to blame the decline of the hog on badgers and ignore everything else is, perhaps, courting an audience which hates badgers.

Historian Tom Holland, a self-acknowledged Hedgehog fanatic, suggests a legally binding obligation on Government to restore hedgehog populations. How might this work? One way might be to wipe out badgers to save hedgehogs, but does it make any sense to make one native mammal extinct, to save another?

This week we are likely (unless the Parliamentary agenda is trammelled by the rampaging ego of Boris Piccaninny Watermelon Letterbox Johnson) to see the first new Agriculture Bill placed before Parliament in over 50 years – and the most important one in over 70. The odds are that it will introduce a radical new approach to supporting farmers – paying them to provide public benefits, such as nutritious food and clean water, to take action to reduce climate change, improve wildlife and create better soils. This approach (if it survives the inevitable push to water it down by the farming unions) will mark a significant shift away from that of successive Governments who, between 1940 and 2005, encouraged farmers to grow more food by paying them to do so. The last 13 years has seen landowners receive farm subsidies whether they grow food or not, just for owning the land.

The Drive for Self-sufficiency

Looking back at the grants available to farmers in the past is real eye-opener. Grants of £7 an acre were available in 1960 to plough up old grassland. There was a fertiliser subsidy, a shotgun cartridge subsidy, subsidies to help grub out hedgerows and small woodlands (or not so small woodlands.) and to drain wetlands. Subsidies were also available to put up farm buildings and silos for grain or silage. And if the bank was sniffy about lending money knowing they would be repaid from all these government subsidies, a three year credit agreement could be arranged on purchases paid for by the Government. On top of this, if there was more food than the market needed, price support mechanisms would kick in to ensure farm income remained the same. This was all part of the drive to produce more food, to make us more self-sufficient in food production which was the target laid down by successive Governments.

It’s fair to say that the push for greater food production was particularly strong under post-war Labour Governments, compared to Tory ones. Attlee’s radical post-war Labour Government introduced the Agriculture Act with all its various different support schemes. That administration also set up a variety of different agricultural research stations whose job it was to find ways to modernise agriculture so as to increase food production – breed new varieties of cereal crops; grow new and more productive grasses that would respond better to new types of artificial fertiliser; work with the chemical industry to develop new types of pesticide.

A further round of support for more intensification happened under Wilson’s Government through the 1960s when Farm Improvement Grants paid for more hedgerow to be removed and fields to be drained. And again, after the UK joined the Common Agriculture Policy in 1973, for the rest of that decade a Labour Government enthusiastically pursued the now established policies of agricultural intensification.

What all this intensification did was to increase the level of self-sufficiency in indigenous food types (i.e. not bananas etc) to 87% in 1991. This has since dropped back down to 75%.  So it is in this context that we must consider why the current Labour farm policy team wants to increase food self-sufficiency to 80%. And this is assuming that the 80% refers to indigenous foods, not everything. Do we really want to grow more food here and import less? Is this intrinsically a good thing? The UK only produced a third of the food it consumed at the outbreak of the First World War in 1914 (though imports were mainly from the Empire and Dominions) and I don’t think many people today, other than perhaps extreme neoliberals, would argue that we should revert to producing that little of our own food.

Would it be possible, for example, to increase indigenous food production by 5% without causing further widespread environmental impacts, or at the very least without curtailing any efforts to reverse the impacts caused by previous policies? What is wrong with buying food from abroad? We’ve become used to importing food from the EU, confident that it meets our own standards on animal welfare, environmental impact, and food safety, among many other things. And food imported into the EU also has to meet those standards. Maintaining these standards after Brexit is vital – and consumers have, rightly, already rejected calls for cheap chlorine chicken or hormone beef to be allowed in.

Did Socialism kill Mrs Tiggywinkle? No, but successive Labour Governments did place food production above all other considerations. As hedges were grubbed out, wildlife-rich grasslands ploughed up, and pesticides poured onto pasture and cereal crop, poor Mrs Tiggywinkle paid the price. She’s retreated from her ancestral home in the countryside, to live in gardens and green spaces within towns and cities, away from intensive farming.

Can she be enticed back into the countryside? That will be a challenge, but shifting to a new way of supporting farmers with public funds – for public benefits, – is the right approach.

Today we see the Agriculture Bill being published and it does focus on public goods. More to come on this soon.

this article was first published on Lush Times.