Recycle and Re-use: Andrea Leadsom has nothing new to say about the Environment, Food or Farming. 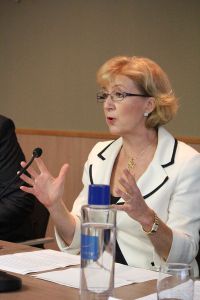 Secretary of State for the Environment Andrea Leadsom, like so many of her Cabinet colleagues, has been missing from this General Election campaign. It’s all been about the PM as President, President May.

Leadsom did surface briefly on Monday to write a piece for Conservative Home website. You can read it there, but you don’t have to, because I have prepared it for your consumption, using some special ingredients.

The reason for this is because, as I read the piece, it all sounded very familiar. So I had a look at the 2017 Conservative Manifesto, and a recent Government Response to a House of Lords Brexit Inquiry into the Environment and Climate Change – and a few other places.

What I found was that almost the entire piece was cobbled together (verbatim) from previous material. Some of it goes back to the 2015 manifesto, some of it even further.

There were a few new things  – most notably that the commitment to ban the sale of Ivory less than 75 years old  – which had disappeared from the Manifesto, reappeared yesterday. This is much weaker than previous commitments on the ban of Ivory sales – so it’s a mystery why it disappeared altogether, but has now become a commitment again. Definitely something of a u-turn here.

There was also a rather odd claim that farm productivity was higher than ever – figures released today confirmed that farm productivity was down  in 2016, compared to 2015. And there was a general statement that more could be done on a wide number of issues including flood resilience, disease (all disease or is this a veiled reference to Bovine TB which doesnt get a mention anywhere here or in the manifesto?).

Also mentioned only in passing was environmental stewardship, which is interesting considering how much detail there is on this in the Manifesto. It may indicate how much or little this topic interests Leadsom. That she did mention microbeads, which are not mentioned anywhere in the manifesto, may also indicate that she feels proud to have made a difference on this subject.

Also notable by their absence were any reference to either the 25 Year plan for Farming (which seems to have died a death) and the 25 Year plan for Nature, which is in draft. And no mention of the vote to repeal the ban on Fox Hunting – which you would imagine would play well with Conhome reader (and something Leadsom supports).

Here’s the piece, and in italics are the same phrases or similar, which I have found elsewhere.

Brexit can let us give British agriculture a better deal

Britain’s future prosperity, our place in the world and our economic security will all be defined by our departure from the European Union.

Brexit will define us: our place in the world, our economic security and our future prosperity[1].

As Theresa May has said, Brexit is an opportunity to emerge from a period of great national change stronger and more prosperous than ever before.

I believe our United Kingdom can emerge from this period of great national change stronger and more prosperous than ever before[2].

Leaving the EU also presents huge opportunities for the environment, our food and farming industries, and rural communities.

We have huge ambitions for our farming industry[3]

Our priorities are simple: to grow more, sell more and export more Great British food, and to be the first generation to leave our environment in a better state than we inherited it.

We pledge to be the first generation to leave the environment in a better state than we inherited it.[6]

This country already has some of the highest animal welfare standards in the world and we will build on that.

We will continue to take action to improve animal welfare.[7]

We have pledged to make CCTV in slaughterhouses mandatory, bring in new regulations for pet breeders, and we will control the export of live animals for slaughter.

We will implement our proposed reforms on pet sales and licensing and will make CCTV recording in slaughterhouses mandatory. As we leave the European Union, we can take early steps to control the export of live farm animals for slaughter.[8]

Our food and farming businesses employ one in eight workers across the whole of the United Kingdom and generates over £100 billion a year for the economy.

Food and farming contributes £100 billion a year to our economy and employs 1 in 8 people[9].

Farm productivity is higher than ever before. However, there is still much more we can do to support innovation in farm techniques, skills development, greater resilience to disease and floods, as well as environmental stewardship and sustainability.

Last summer, we moved swiftly to provide farmers with continuity and certainty on EU agricultural funding. It means that if elected on June 8, Theresa May’s Conservatives will commit to the same spending on farming and food production over the next Parliament as is now provided by the EU’s Common Agriculture Policy.

So we will continue to commit the same cash total in funds for farm support until the end of the parliament.[10]

For the UK’s fishing communities Brexit also brings opportunities. After leaving the EU, Britain will be able to control our fishing waters – and the resources in them – out to 200 nautical miles.

When we leave the European Union and its Common Fisheries Policy, we will be fully responsible for the access and management of the waters where we have historically exercised sovereign control[11].

In recent months we have made good progress on some of our key environmental priorities – a ban on microbeads and working to complete a ‘blue belt’ of protection around our overseas territories and marine conservation zones around the United Kingdom.

We will now go even further, creating a Blue Belt around the UK’s 14 Overseas Territories, subject to local support and environmental need[12]

We will continue our work to conserve the marine environment off the coast of the United Kingdom.[14]

In addition we have launched the first ever litter strategy for England. This is designed to not only educate people, but also to introduce stronger enforcement against littering.

We will do more to reduce litter, including by supporting comprehensive rubbish collection and recycling, supporting better packaging, taking new powers to force councils to remove roadside litter and prosecuting offenders[15].

We have also committed to plant 11 million trees – and a further one million just in our towns and cities.

We are funding natural flood management projects to better protect communities, and we are introducing greater safeguards for our ancient woodland.

and provide stronger protections for our ancient woodland[18].

As we translate the body of European law into our domestic regulations, it means that the rules around the environment, food and farming will be set in the UK.

Over time, that means we will be able to prioritise scrapping unnecessary burdens on farmers[19] and ensure that our environment is enhanced by laws that focus on the needs of the UK, rather than 28 EU member countries.

protections given to consumers and the environment by EU law will continue to be available in UK law at the point at which we leave the EU. The bill will also create the necessary powers to correct the laws that do not operate appropriately once we have left the EU, so our legal system can continue to function correctly outside the EU[20].

It is not only at home in the UK that we have great ambitions for improvements to the environment. Brexit gives the UK a chance to play an even bigger role in tackling some of the world’s greatest challenges.

We will continue to lead the world in tackling the threat of climate change as well as in combatting the illegal wildlife trade in endangered species. We will also continue with the plans we have set out to ban the sale of ivory produced in the last seventy years, making UK rules on trading ivory amongst the toughest in the world.

We are at the forefront of action against global climate change[21].

All of this is only possible with a strong economy, by ensuring that we get a good deal from Brexit, and under the strong and stable leadership of Theresa May and her Conservative team.

If you want the best deal for our environment and our food and farming industries, the only choice is to vote for Theresa May on June 8.

UK conservation professional, writing about nature, politics, life. All views are my own and not my employers. I don't write on behalf of anybody else.
View all posts by Miles King →
This entry was posted in 2017 general election, Andrea Leadsom, Uncategorized and tagged Andrea Leadsom, Conservative Home, conservative manifesto, Defra, General Election 2017. Bookmark the permalink.