The New Common Agricultural Policy Rules: Can you claim farm benefits for your golf course? 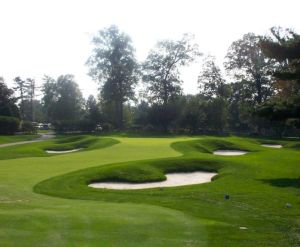 And so it begins again.

The Rule Book for the new Common Agricultural Policy has been published – it’s here.

There are some welcome omissions – the much derided 50 Trees rule has been consigned to history. The requirement to prevent “the encroachment of unwanted vegetation” has gone. These rules were straight out of the Alice in Wonderland Bureaucracy songbook.

But in their place The European Commission has invented new and imaginative ways to confuse farmers, landowners and anyone else interested in how public money is spent.

We have a new Active Farmer Rule. This was supposed to put a stop to people claiming CAP benefits which they weren’t entitled to. These new rules immediately exclude any smallholders with less than 5ha of eligible land from claiming subsidies – that’s an awful lots of smallholders where the money would have very well spent supporting sustainably produced food. And they are probably the most active farmers of all.

If a farmer has claimed more than €5000 in farm subsidy in any of the previous 3 years, they will be deemed an active farmer. And farmers will qualify as active farmers if they DO NOT operate any NON FARMING activities such as running an airport. Or a Railway network. I guess the list is pretty endless. Active farmers might qualify on the basis that they are not operating a drugs cartel, or a funeral directors, or….. well you can make up a few yourself and let me know.

This reminds me of Monty Python’s Piranha Brothers’ who developed “The Other Operation” in which they selected another victim and threatened not to beat him up, if he didn’t pay them.

For those concerned that the railway networks on their farms may make them ineligible to claim farm subsidies, I can reassure them now, that miniature railways and tramways, are exempt.

One particular criticism of the previous CAP subsidy system was that Golf Courses were eligible for farm subsidies (apparently 30 UK golf clubs had claimed farm subsidies under the previous rules). Naturally this was considered to be a very serious misuse of public funds, and the European Commission has stepped in to stop up this loophole. So now, if there are any golf courses out there thinking they can grab a bit of taxpayers cash, forget it. That is, assuming there’s a clubhouse. or a driving range (with nets) or a spectator stand. Any golf course with a spectator stand will definitely not get a farm subsidy. But if you have a golf course which has no stand, no clubhouse, no driving range with nets – might you be eligible to claim that £200 a hectare? Possibly. If the Golf Course was “for personal use only” then that would be fine and you can claim the money. How would the RPA go about deciding whether a golf course (without Spectator Stand) was “for personal use only”?

“What about a Nature Reserve?” I hear you say. After all, is it fair that Conservation Organisations like the National Trust or RSPB rake in millions of pounds of farming benefits every year, when there are cows literally starving in fields. The RSPB pulled in €4.2M in farming benefits in 2012. And the European Commission has considered this – seriously. They have decided that, if a nature reserve has a permanent structure, such as a viewing hide, it isn’t farmland and isn’t eligible. Even if that hide is there for people to watch cows grazing on grass, it doesn’t qualify as being actively farmed.

What other “permanent structures” on a nature reserve might also disqualify it from receiving farm benefits? If I were from the RPA inspection team, I would definitely be looking for Interpretation Boards, Leaflet Dispensers, and possibly Dog-Poo bins; failing that they could look for dog-poo bag-strewn trees near the car park. These seem to be permanent additions to many Nature Reserves these days.

Now even if you are involved in all sorts of non-agricultural activities (such as owning Nature Reserves) you can still claim the payment, if you have more than 36ha of eligible land, or 40% of your business was farm-related, or your farm payments totalled more than 5% of your total income in the previous year. So it looks like the RSPB will be able to continue to claim their farm benefits after all.

The Commission are keen to ensure that farming and forestry are what happens on land eligible for CAP benefit payments. They are so keen, that they have come up with a list of non-agricultural activities, and decided which are ok to do on farmland and which aren’t. So “walking” is ok on farmland and you can continue to receive your farm benefits if its gets walked on.I am concerned though that the Commission have not defined what “walking” is. Is hopping ok? what about strolling, or ambling. Or Rambling.

“Bird watching” is also ok, according to the Commission. It doesn’t mention looking at plants or butterflies (let alone mosses or bugs) so farmers may want to keep a close eye on visitors walking on their land to make sure they are walking properly (not hopping) and only looking at birds. Shooting Game is also allowed (presumably not shooting walkers though.)

Things the Commission are not going to allow on eligible land include  – playing golf! Oh no, it’s not eligible unless you can prove that the golfing does not significantly interfere with the agricultural activity. Or you have a golf course for “personal use only”. What might constitute interference with agricultural activity when playing golf? I suppose killing one of your own sheep by hitting it on the head with a poorly executed golf stroke might qualify. This sounds increasingly like a scene from Shaun the Sheep.

zoological conservation (land on which animals, not typically kept in England for farming purposes, are kept primarily for study, conservation or display to the public)

So having animals on farmland, which aren’t farm animals, which are there for conservation, means you can’t claim your benefits. Wild Boar and Beavers come to mind, as do Elephants.

Just in case you thought we’d really seen the back of the nonsense about 50 trees and encroaching vegetation, there is still the small matter of what to do about scrub. Let’s face it, the Eurocrats in Brussels hate scrub, they hate the word, they really hate having to think about it, or pesky people trying to explain to them that it has  any value. Bracken and Scrub have to be classified into two categories – ineligible bracken (and scrub) and eligible bracken (and scrub). Eligible Bracken is not in any way related to Eligible bachelors.

Eligible Bracken is nice Bracken, and it only qualifies as nice bracken if “grasses and other herbaceous forage remain predominant” and it is suitable for grazing. Eligible Bracken then qualifies for farm subsidies by being classified as permanent grassland.

Ineligible Bracken is bad, nasty Bracken and does not qualify as permanent grassland, because presumably grasses and other herbaceous forage do not predominate and it is not suitable for grazing.

The Eurocrats have stated that all ineligible bracken stands on a farm have to be mapped – all of them, even the tiny ones. Then all the bits of nasty ineligible bracken have to be added together, so that, if the sum is greater than 100 square metres, the farmer has to declare them to the RPA. 100 square metres! a 10m by 10m square. Now I have seen bracken in my time – nice and nasty. And I have seen sheep, cattle and ponies, getting stuck in grazing or browsing in amongst stands of bracken and scrub. Even a 10m by 10m patch is hardly what anyone could reasonably argue to be ungrazeable bracken.

As for scrub, the same rules apply, unless it’s Dense Scrub. Dense Scrub is another Eurocrat’s nightmare – what is it for? where does it come from? Dense Scrub is as bad as Ineligible Bracken, possibly worse. Defra are very clear on this: “Dense Scrub is not Eligible.” Full Stop.  Period. There is no definition of Dense Scrub though. But we will know it when we see it, say the RPA Special Scrub Unit (Dense).

What conclusions can be drawn from this Bureaucratic madness? I think one clear message comes out.

For CAP 2015, The European Commissions’ special number is 5. It took them five years to come up with this madness;  if you have less than 5ha you don’t get any money. If you have thousands of hectares, you get a 5% reduction, but you’ll only get paid for your golf course, if it’s for personal use only.

UK conservation professional, writing about nature, politics, life. All views are my own and not my employers. I don't write on behalf of anybody else.
View all posts by Miles King →
This entry was posted in agriculture, Common Agricultural Policy, Defra, European Commission, scrub, Uncategorized and tagged common agricultural policy, Department for Environment Food and Rural Affairs, European Commission. Bookmark the permalink.

6 Responses to The New Common Agricultural Policy Rules: Can you claim farm benefits for your golf course?