England desperately needs more trees, we are constantly told. And it’s certainly true that tree cover here is lower than most other European countries. The data must he handled with care though, when tree cover can include anything from Eucalyptus plantations in Spain, to Sitka spruce in Scotland. Not all trees are of equal value.

Nevertheless the Government has set itself a target to increase the tree cover of England by 30,000ha a year from 2025. Considering that it only achieved 2,330ha of new planting in England, in the year to march 2020, it has a long way to go. Imagine what would be needed to increase current planting rates by a factor of 13 in five years time. Imagine what environmental damage could be done if that planting target was met, by ignoring the impact of tree planting on other – more valuable – wildlife sites.

Earlier this year I wrote about a couple of examples of tree planting where environmental damage had been done – one in Cumbria and one in Cheshire. In both of these examples, the wildlife value of the sites was known, but not necessarily known to the land owners. Insufficient checks were made by those responsible for organising the tree planting, and the trees ended up being planted in the wrong places. As far as I know, in both of these cases the damage has been reversed and the trees removed. Both cases involved trees being planted without any involvement from the official Government Forestry agency the Forestry Commission, either during the assessment phase, or via grant-aid to provide financial support for the planting.

This article highlights in many ways a much more disturbing case, where the Forestry Commission and other official bodies are very much involved. 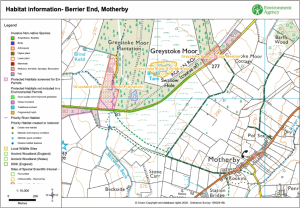 the area in question is the area of heathland south-east of the road.

The Greystoke Estate is famous as giving its name to the fictional Viscount Greystoke, better known as Tarzan. The real estate occupies a large chunk of land west and north of Penrith in Cumbria, right on the edge of the Lake District National Park. Greystoke Park appears to have been laid out in the 18th century with plantations – and tree planting continued through to the 20th century. Parts of the Estate were turned over to conifer plantation in the 1960s and sold off – most recently to Rally star Malcolm Wilson; this area is now known as Greystoke Forest.

Immediately to the south of this mosaic of conifer blocks lies about a hundred acres of sloping land, partly grassland, partly heathland, with a very wet peaty, bog in the middle of it, with some areas where the influence of the underlying limestone on the groundwater appears.  Old maps (collated for a planning proposal immediately adjacent to the site) indicate that part of the land had also had trees planted on it (known as Moorslack wood) in the late 18th century, but these had disappeared by the mid-20th century, perhaps cut down during the First or Second World Wars. A few scattered trees to the north-east corner attest to that lost plantation, as this aerial image shows. 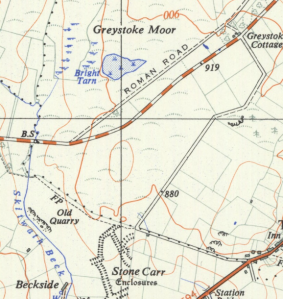 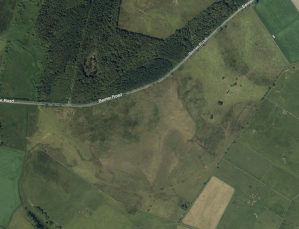 Aerial image of the land south of the Berrier Road © microsoft.

The owner, according to documents sent to the Forestry Commission, is the local dairy farm, Berrier End Farm. Defra records indicate it’s a small farm in receipt of  ca £25,000 a year in farm payments, so about 125ha. That owner decided that they wanted to turn over this land to tree planting. Giving over a quarter of your farm to tree planting is no small commitment and it would be interesting to understand why that happened, but it’s indicative of the fact that small upland farms like this are right on the edge of financial viability, and with the coming changes to farm subsidies, it’s not surprising that farmers may decide to take up generous payments for tree planting and maintenance instead.

And generous they are. You can start with a woodland creation planning grant. They will give you £1000 to get started, then £150 a hectare plus 70% of the cost of specialist surveys, up to £30k per project. This particular site is 30ha so that’s £4500 plus, just to design the planting scheme. You can then get another grant for preparation of a woodland management plan (another £1k). But the main grant is a capital grant to cover the costs of planting – at £6800/ha  – that’s up to £204k for a 30ha site like this one. This latter one is paid via the Countryside Stewardship Scheme. Once you’ve created your plantation you can get a £200/ha a year payment for maintaining it, for ten years – that’s £60k. Considering that farm payments are only guaranteed for one year (2021) after this one, it’s easy to see the attraction of going into forestry with grants this generous.

Because of the size of the project, the rules on Environmental Impact Assessment (EIA) mean that it would need to have some form of assessment. If it had been in the National Park (just a few hundred metres away) it would have gone for a full screening opinion. As it was, it was identified as a “low risk” area on the FC’s own mapping system, apart from the area of deep peat in the middle. 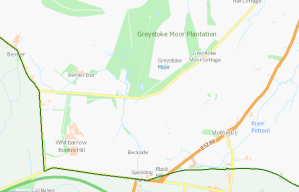 This map from the Forestry Commission’s own GIS shows that this whole area has been identified as a priority for tree planting, on the basis that it is low risk. This means that existing known and mapped information – on SSSIs, scheduled monuments, historic landscapes etc, has been interrogated and this is the “white space” in between. The assumption being that if it doesn’t have a designation it’s fine to plant trees on. The small area excluded in the middle of the site is deep peat.

The Forestry Commission asked the applicant to provide evidence about the environmental value of the site and was told it was “degraded agricultural land”. A bird survey was carried out which found 16 pairs of breeding Skylarks and Meadow pipits, plus a potential pair of Curlews. For some strange reason this, plus the description by the bird surveyor of the area as acid and marshy grassland, was omitted from the information circulated to consultees, including the RSPB. Had this information been circulated, it’s likely that the response would have been that it needed a full EIA.

The FC approved the application  – for a new plantation of 20ha of commercial conifers, 5ha of broadleaves (mostly around the edges) and 5ha of open ground, relating to the deep peat in the centre of the site and also adjacent to the Scheduled Ancient Monument at Stone Carr to the south.  Natural England didn’t object, only commenting on the need to avoid planting on peat greater than 40cm in depth and advised on planting a buffer of broad-leaved tree species along a watercourse. There is some irony here, given that just this week Natural England was praising the importance of protecting blanket bog on its own blog.

Shortly after the application had been approved, the site was drained and ploughed in preparation for tree planting – it’s unusual for this to be done in the Summer, especially during the bird nesting season when the owners knew that there were ground-nesting birds present. A concerned neighbour contacted local botanists, who realised that the plantation was going to destroy a botanically rich mosaic of unimproved (and semi-improved) grassland, heathland, blanket bog and basin mire, with calcareous influence.

The site was not on any map, and the owner had not been aware of its value. No-one with any botanical knowledge had looked at the site – some site visits had been cancelled as the whole public consultation had taken place during lockdown.

Unofficial visits by botanists after the ploughing had begun, recorded over 100 species of plants and lower plants, including several Red Data Book species and a number of rare and threatened grassland and other habitats. Despite being presented with this additional information the Forestry Commission refused to reconsider, let alone reverse, their decision.

ploughing of peat soils releases far more carbon than the planted trees will ever sequester.

It’s not too late to reverse this damage and reinstate the site, but the FC is digging its heels in. If this had been a case of a farmer proposing to convert semi-natural habitat into intensively managed grassland or arable, I think it’s fair to say that the EIA process would have identified the site as valuable and the farmer would not have been able to proceed. If they had proceeded without going through the EIA process, Natural England could and may well have insisted on the site being restored. The current situation is that the Forestry Commission refuse to accept they made a mistake and the tree planting is proceeding – with the loss of 30ha of valuable wildlife habitat. That’s a loss we just can’t afford to suffer.

There’s a bigger point though. If the current system is failing to protect important sites, when there’s only a few thousand ha of plantation every year, how much will be lost when it’s thirteen times as much planting?

The biggest single thing that would address is would be the systematic completion of the priority habitat inventory. At the moment the PHI map is so incomplete that it’s actually dangerous, because it creates a false sense of security. Secondly the FC need to look again at their “low risk” areas map and the way they use it. At the moment everything that isn’t recognised as a valuable feature is lumped together into “low risk”, when in fact it’s a mix of “low risk’ and “unknown risk”.

Thirdly is it really acceptable in this day and age, that FC staff responsible for implementing the Government’s massive tree planting target, are incapable of recognising a piece of priority habitat when it’s staring them in the face? This case certainly indicates the urgent need for training.

Finally, this also illustrates that if you cut regulatory organisations’ funding to the bone, don’t be too surprised if they mess up.

UK conservation professional, writing about nature, politics, life. All views are my own and not my employers. I don't write on behalf of anybody else.
View all posts by Miles King →
This entry was posted in Cumbria, Forestry Commission, peat bog, tree planting, Uncategorized and tagged Berrier Farm, Forestry Commission, peat bog, tree planting. Bookmark the permalink.