Jenrick’s Planning Reforms have nothing to say about tax dodges 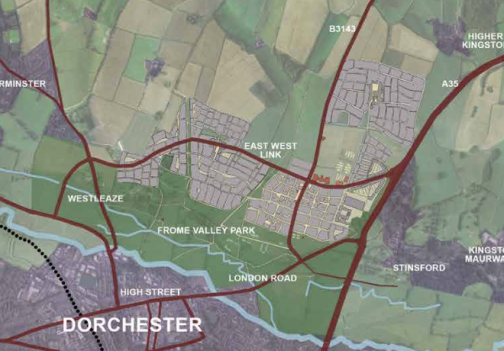 It’s the last day for responses to the Government’s latest proposals to reform the planning system, to “level up” and solve the housing crisis, if you believe the spin. The proposals include zoning land (at a large scale) for development and could create a cash bonanza for landowners, as illustrated by this local story.

A couple of years ago now I was doing a regular walk near Dorchester where I live. Tied to a gate in a plastic wallet was a wodge of official looking paperwork. The rain had got to it and it was a bit smudged but I could see a map of the area around the public footpath I was walking along. In fact the map showed quite a large area of farmland near to the town. I looked a bit more closely a saw what it was – a Section 31/(6) notification. This is Section 31 of the Highways Act 1986, which creates a right for landowners to place a deposit (no pun intended) with their Local Authority, stating that they own areas of land and that they recognise that public rights of way exist but have no intention of creating any new ones, nor would they accept any proposals for new rights of way to be created based on historic use. It’s not foolproof but does help prevent any claims for new rights of way to be made. Since a change in the procedure in 2013 landowners have had to deposit maps with their local council and these are often now available online – it’s one of the way Guy Shrubsole was able to piece together Who Owns England, for his eponymous book.

Not long after that walk, word got out locally of plans to create a new “urban extension” north of Dorchester, a bit like Poundbury had done to the west. This new extension called “North Dorchester” by the developers is for another 3500 homes, on top of the 2700 being built at Poundbury. It’s a massive increase in the size of the town, with all the attendant pressures on the local infrastructure – hospitals, schools, the road network, water usage, sewage, additional recreational pressure on the surrounding greenspace. Still, there is a housing crisis in Dorset – it’s one of the most unaffordable places in England, comparing average wage vs house price. Surely building lots more houses will solve this?

It reminded me of that sodden map tied to the gate. Who owned this land? I looked it up on the Dorset Council landowner deposits website and bingo – there is was. Ilchester Estates. Here’s the map. As you can see, it’s not a particularly helpful map as it doesn’t show the ordnance survey base map.

So I looked on MAGIC and its very basic GIS tools enabled me to create this map and calculate the areas involved. The main block to the east (which was the bit where I encountered the soggy map) is 130ha. The western block is 53ha but 17.5ha of this is public open space (open access land associated with the old River Frome water meadows.) Still, that’s 165.5ha of land to be developed as part of the urban extension. Except of course it’s not really an urban extension, because there’s a floodplain in between the old town and the new one. Still, details.

When land is converted from farmland (as this is now) to housing, its value increases dramatically. Land worth perhaps £20,000/ha  as mediocre arable land, instantly becomes worth say £2 million/ha. The maths is easy – 165 x £2M = £330M.

Except we’re talking about Ilchester Estates, the largest landowner in Dorset owned by one of the wealthiest people in the Country, the Hon. Charlotte Townshend. Guy Shrubsole estimates her land ownership extends to 11,300 acres, but it may well be more like 15000, just in Dorset. Townshend inherited the estate, indeed the Ilchester Estate has an interesting and unusual history of inheritance through the female line, which you can read about here. While her ownership of Abbotsbury tropical gardens and the famous swannery may be public knowledge, perhaps less well known is her property empire in Holland Park, London.

Ok, so owner of landed estate looks to massively increase her wealth by new housing development. That’s ok we need the houses and her unearned profits will be taxed, to benefit the empty coffers of the treasury…

Leaving aside the vexed question of what kind of houses will be built and will they resolve the housing crisis (spoiler: they won’t), I’m just going to focus on the tax element. I’ve become increasingly interested in tax and the tax system. Some readers will have spotted my investigation into farmland and tax breaks last year. I’ve done some more work on forestry and taxation this year, which isn’t in the public domain yet. It was only after I had published “where there’s muck” that I came across an obscure but highly relevant corner of the tax system, which just happens to apply to cases like The Ilchester Estate and North Dorchester.

Capital Gains Tax applies when an asset is sold at a higher value than when it was purchased. It’s one of the great inequities of the tax system that the top rate of CGT is 28% compared with 45% for income tax. If you earn an income you can have nearly half taken in tax, but if you have inherited wealth you are taxed at a little over a quarter if you want to flog something off. But there is more.

There are many varied and frankly bizarre reliefs available for CGT. One of them is called Rollover Relief. Rollover Relief applies when an asset is sold. Effectively the seller has 36 months after (or 12 months before) the sale to reinvest the profits in an eligible asset, to make the transaction exempt from tax. Yes you can get out of paying your 28% tax if you spend the money buying some other asset. What could these eligible assets be I hear you ask. The list is here, including fish and milk quota, plant and machinery, and – especially relevant forf this story, farmland and commercial forestry land. Yes, you can sell your farmland for housing, multiply its value by 100 and then walk away with the profits tax-free, if you reinvest in more farmland! The only proviso is that you don’t then sell that land on in a way which means you would have to pay the CGT eg by buying more farmland. That’s why it’s called Rollover relief. You can roll it over time and again until you die and the tax liability disappears, in a puff of will dust.

So there you have it. Sell your farmland for housing, walk away with a few hundred million quid, and not pay a single penny in tax.

Jenrick’s planning reforms do make proposals for changing the way developers pay for infrastructure, doing away with the complex Section 106 agreements and Community Infrastructure Levy approaches, though there isn’t really enough detail to say whether this will help or not. But it’s a cosmetic exercise compared to the amount of money that is draining away from developments in perfectly legal tax dodges. Planning for the future does even mention CGT on land value uplift  – in passing.

But they know they have no power over the Treasury to make such changes, even if they wanted to.

UK conservation professional, writing about nature, politics, life. All views are my own and not my employers. I don't write on behalf of anybody else.
View all posts by Miles King →
This entry was posted in planning, tax havens, tax reform, Uncategorized and tagged capital gains tax, Dorchester, Ilchester Estates, Jenrick, land value uplift, planning reform, rollover relief. Bookmark the permalink.