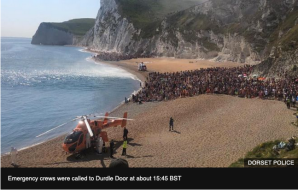 It’s Magic Monday, or Happy Monday or whatever new slogan has been dreamt up by Dom Cummings and his Vote Leave team in Downing Street to distract us.

Just last December Cummings and his libertarian band of brothers (and a few sisters but mainly brothers) were celebrating their resounding victory in the General Election. Then Coronavirus came along and swept all their dreams, of smashing the system and letting the free market rip, away. Then Dom himself added cream on the top of that Coronavirus Tsunami, by showing the people that he really didn’t see himself as one of them. It had all been a ruse.

Segueing seamlessly from the iconoclast to the icon, in a single week of revelations. Dom’s political career, or at least the current incarnation, now survives from one day to the next.

So today we are invited to celebrate the end of lockdown. The Shielded Can Walk In the Streets! The Children can Return to School! Everyone Can Go To The Beach!

Except everyone has already gone to the beach. At least down here in uber-sunny Dorset.

Pictures of Bournemouth beach and Durdle Door were widely shared over the weekend on social and traditional media, inviting comments of astonishment and concern. Social distancing might have been possible at Durdle Door until two air ambulance helicopters had to land on the beach, at the same time, forcing the thousands into a pack, almost like penguins in the Antarctic. Three people (they must by definition have been young men) had seriously injured themselves jumping off the Door into the sea. (spoiler: there isn’t enough depth of water and there are rocks.)

Now I’d be the first person to point out that, generally speaking, the chances of catching coronavirus from standing or sitting near another person outside is going to be very low. But what about standing in a queue for an ice cream, or in the car park, or on the single path to the beach. Or after a few cans of beer? I don’t know. I suspect the chances (the R number) starts to go up, the more people there are, the more alcohol consumed.

The rest of us – the locals (yes I know I’m a blow-in, only here for 23 years) but I do feel like a local some of the time, stayed away. We had friends who lived in West Lulworth, and know what’s it like during a normal Summer.

I went for a walk on one of my well-worn local circuits. Down to the river, across the water meadows, back through the town. It was pretty quiet, a few family groups. Quieter than it had been in a long time. Perhaps some locals had gone to the beach. The meadows were all looking parched. Haylage was cut and baled, in May. I can’t remember a year when everything has been this early. I was thinking there won’t be much to see in the countryside aside from a lot of brown fields, in a few weeks time. A Red Kite dipped and curled in the thermals off the river banks, as if it really was on the string of a skilful flyer. A youngish dad had caught a little fish, perhaps a Trout fry, in one of the streams and was trying to interest his little daughter in it, perhaps a little too over enthusiastically. She didn’t seem so keen on leaving the dry of the river bank. 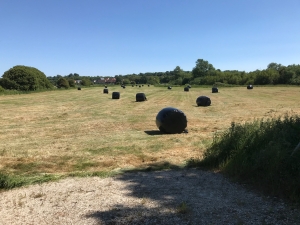 During the depths of lockdown this walk would be preternaturally quiet. Bird song would be so loud as to startle. Yesterday a Cetti’s warbler exploded its song – well not really a song, but a violent expulsion of air, about 3m from me. It was loud, but the noise from the bypass was louder.

Even though there is still much less traffic the normal, it’s as though those on the road are trying to make up for the absent ones. As though there is an aural space that must be filled. There is a physical space, left by the absent traffic, which means that those who wish to can go faster, accelerate faster, achieve yet higher revolutions per second, and that little bit more g-force in the small of the back, or the fingers gripping the handlebars. Can I get it up to 12000 before I have to slow down for the next roundabout?

Did the pressure of lockdown build up such that it needed to be released in a mass exhalation, a mass acceleration, a celebration of noise – and fire? Witness the ever increasing number of fires now being lit – ostensibly by accident as single-use barbecues are lit on tinder dry heathland or moor. Perhaps subconsciously the food is the excuse, the underlying reason is that release of energy – the pent up energy of lockdown.

Fire, is after all, just a release of energy.

I don’t imagine the wildlife killed or made homeless by the 220ha Wareham Forest fire will sympathise. 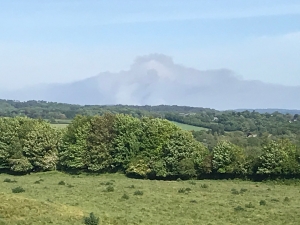 Of course Dom doesn’t care. He may be relishing this outpouring of libertarian behaviour.

Why shouldn’t I have a barbecue on the heath, if that’s what I want. Who’s going to stop me?

Why shouldn’t I go as fast and as loud as I like on the bypass. Who’s going to stop me? (speeding had dramatically increased during lockdown)

Why should I take my rubbish home when I can leave it in the park, the council will come and clear it up.

Why shouldn’t I jump off that cliff if I want to. The NHS will patch me up afterwards.

Why shouldn’t I kill as many raptors as I can find during lockdown. No-one’s going to see me.

Why should I care about climate chaos? it’s sunny. Let’s go to the beach

This is known in economics as the Free Loader or Free Rider problem. It’s people taking advantage of opportunities to benefit themselves, provided by the collective action of society. And it feels like there has been an outpouring of free-rider behaviour since lockdown started to collapse on or around VE day. Once it’s out of the genie’s lamp it can be very difficult to put back in.

I read a report of a survey this morning suggesting 57% of people didn’t want things to go back to the way they were after coronavirus has been tamed or passed through – and that home working would stay, commuting would decrease and even foreign holidays might decline. All I would say is that, based on what’s happening at the moment, there will be a significant section of society who are thinking how can I take advantage of this situation for my own personal benefit, and screw society. We can call them the free-loaders.

Tackling the free-loaders is going to be a significant challenge post-coronavirus. And having libertarians like Dominic Cummings in power is going to make that challenge much much harder.

UK conservation professional, writing about nature, politics, life. All views are my own and not my employers. I don't write on behalf of anybody else.
View all posts by Miles King →
This entry was posted in coronavirus, Dominic Cummings, free-loaders, libertarians and tagged coronavirus, Dominic Cummings, free-loaders, libertarians, lockdown. Bookmark the permalink.