Is it racist to say Prince Albert was German? 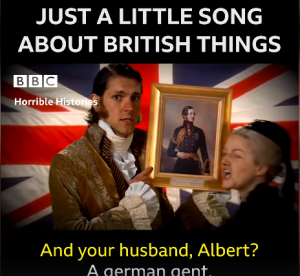 Amid the fallout arising from the BBC’s decision to show some humorous clips from Horrible Histories on Brexit Day, I was called a racist. The clips included a song “British Things” about things the British thought (and still think) are British, that actually aren’t. Like a cup of tea, with a spoonful of sugar, and Prince Albert, Queen Victoria’s husband.

The Brexit brigade hate this sort of thing, mainly because they don’t have a collective sense of humour. A largeish section also hate the idea of people criticising Britain, and by extension, the British Empire.

This makes sense when you put Brexit in the context of that lost Empire, those Glory Days, when Great Britain was truly great (ignore the Irish question – too complicated), our Navy ruled the seas, before we were cowed into servitude by those nasty Europeans. The fact that the Empire was collapsing into chaos at the time the majority of Brexit voters (age group 55 to 75) were children or teenagers, is also germane – something Otto English has written about. Fed on a never ending diet of war films placing Britain at the centre of the glorious victory against the Nazis, only further boosted this image of Glorious Britain, even as reality descended into post-colonial warfare across much of that pink on the world map (and Ireland).

Following on from Andrew Neil’s attack on Horrible Histories for being “anti-British drivel”. Sorry. Stop there. Andrew Neil, who I have written about previously, lives in France and worked for decades for an Australian with US citizenship… who now works for the billionaire Barclay brothers who live in a tax haven literally off the coast of Britain. Neil,  who consistently uses social & traditional media to give publicity to right wing even far-right politics such as the Hungarian Századvég Foundation.

Andrew Neil purports to know what is British and what is anti-British. As if that was an easy thing to do. For me, there isn’t anything more British than Horrible Histories. It imbues some of the best qualities in that nebulous thing, Britishness. It’s funny, irreverent,  satirical, doesn’t take itself seriously, indeed it’s often plain silly. Wonderfully silly. And underneath all that there’s a self awareness that Britishness is complicated, and there’s some very dark stuff under there once you lift the bonnet.

Feeling that somehow their glorious Brexit Day was being spoilt by the repeat of a song written for children ten years ago, one particular individual reacted angrily to me tweeting the link to the song, calling it

No, seriously. This is verbatim.

But my cardinal sin was to suggest that Prinz Albert was German, as the HH song had stated. This elicited the claim that I was racist (the offending tweets have now been removed after I protested). Well, technically HH was wrong because Germany didn’t exist until 1871, ten years after Prinz Albert died. He was born in the Saxon Duchy of Saxe-Coburg-Saalfeld, part of the Holy Roman Empire. He became a British subject on his marriage to Queen Victoria, a unique way of becoming British. So it’s fair to say that Prinz Albert was both British and not British, depending on which part of his life you’re looking at. The racism claim was based on the idea that somehow in repeating the claim about Prince Albert, this meant I believe that you can only be British if are born in Britain.

Let’s just explore briefly what being British means and has meant through the ages. Since 1707 British subject status (which defined how was British and who wasn’t) was conferred on anyone who was born in any part of the British Empire which essentially meant The British Isles, plus anywhere within the Crown’s “Dominions and allegiance.” The legal status of different colonies, protectorates and Dominions is complicated and I won’t go into it here, but you can read in more detail here.  But the key word is allegiance – allegiance to the Crown. This is at the heart of what it meant to be a subject of the British Empire. This means that my mum, who was born in Australia before it became fully independent (in 1942), was born a British subject. As was almost everybody who lived across the Empire at that time.

It was the Attlee Labour Government which introduced the status of citizen of the United Kingdom and Colonies in the 1948 British Nationality Act. This allowed British subjects living elsewhere in the Empire to come and live in Britain. But they didn’t become British when they settled here – they were already British. As the Windrush generation would learn, over and over again (even now), their Britishness was not regarded as the same Britishness as those Brits who were born in these islands.

Clearly being British is not quite as simple as it might be thought.

Looking back over the long a varied history of immigration acts particularly from the 19th century to today, one thing stands out. Britishness is a fluid thing – and whether you were allowed to be British or not, was primarily defined by what was best for the Empire at the time. At times when there was a need for, or an opportunity to gain from immigration, the laws were relaxed. When people complained about all these forriners coming here, the laws were tightened up. I remember coming back from a family holiday in France as a teenager, just after the 1981 Immigration Act was introduced. The immigration officer looked at my mum’s Australian passport and asked her how long she was intending to stay. Mum, being ever polite, replied that she’d been here 20 years and wasn’t planning on living anywhere else. But further restrictions forced her, reluctantly, to get a UK passport and citizenship. Even though she was born a British subject.

The thing that particularly struck me about this whole sorry episode is the attack on freedom of speech. Parts of the Brexit lobby wanted to shut down this relatively innocent humorous skit, their actions revealed as a twisted shadow of the political correctness they love to despise.

It’s perhaps no surprise that a recent survey found 41% of leave voters object to people speaking a foreign language in public. Perhaps they think that you can only be British if you speak the Queen’s English all the time. Bludy forriners.

UK conservation professional, writing about nature, politics, life. All views are my own and not my employers. I don't write on behalf of anybody else.
View all posts by Miles King →
This entry was posted in Andrew Neil, Brexit, Britishness and tagged Andrew Neil, British, British Things, Britishness, Horrible Histories, James Glancy. Bookmark the permalink.

5 Responses to Is it racist to say Prince Albert was German?