News has been dripping out, about a significant incident of damage to an SSSI in North Yorkshire.

The first we heard was on 21st August, when Defra announced a successful prosecution of a SSSI owner in North Yorkshire. The owner admitted three offences of damage to Newtondale SSSI, a large and complex site on the edge of the North York Moors National Park – including illegal track construction, illegal felling of trees and “significant earthworks”.

Presumably he was not building new long barrows or a hillfort.

Defra explained that the owner “was handed down a fine and ordered to make a contribution to Natural England’s costs.” Normally the amount of fine and the costs would have been detailed, and that it was left innumerate raised eyebrows, including my own. ENDS reporter James Agyepong-Parsons contacted Defra and asked them for more details, as did his colleague Gareth Simkins. 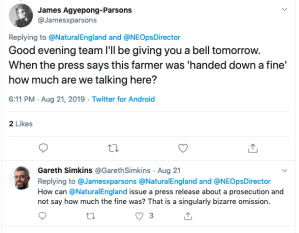 answer came there none.

Eventually, after receiving nothing from Defra, James found the details of the court case – the defendant had pleaded guilty on the 7th May at York Magistrates Court, received a £600 fine and ordered to pay £300 towards Natural England’s legal costs.

Why had it taken two and a half months between the judgement and Defra/NE making the case public? Were they embarrassed about the tiny size of the fine?

I had a look on the MAGIC website to discover that Unit 13 (ca 37 ha in area) of the Newtondale SSSI was now classified as “partly destroyed.” This is about as serious as it gets without Natural England denotifying part of a SSSI because it has lost its scientific interest (or value for nature as it is also known.)

For comparison, it’s worth noting that the area (unit 4) of Gelt Wood SSSI in Cumbria, which was damaged through track construction and illegal felling of trees (for a pheasant shoot) resulting in a £450,000 fine and £457,000 costs, is now considered to be in “unfavourable recovering” condition. An assessment of unfavourable recovering  is good enough for Natural England to  consider a site is in target condition.

Today James revealed that Natural England had spent £61,000 on legal costs prosecuting the case. So that £300 contribution from the defendant seems almost like a snub to Natural England from the Judge.

I was curious to see whether the defendant, a Brian Eddon, was in any kind of agri-environment scheme on his SSSI land, but nothing showed up on MAGIC. Here’s a screenshot of the relevant area: 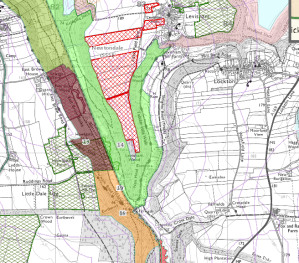 the dark brown area is the SSSI unit which was partially destroyed by Mr Eddon. But the odd thing is half of it is owned by the Woodland Trust and the bottom third by another entirely innocent landowner.

There was no sign of Mr Eddon anywhere on here.

I then remembered I have a very useful dataset provided by open data mapping guru Anna Powell-Smith. Anna mapped environmental stewardship payments back in 2016 and this now provides a very valuable historic data set, as MAGIC only provides information on live agreements. Looking on Anna’s historic dataset, Mr Eddon’s land-holding (or at least the land-holding he entered into Environmental Stewardship) appears.

Aside from the southernmost section, all of the rest of Mr Eddon’s landholding lies within the SSSI. The total area he entered into Entry Level and Higher Level Stewardship, back in 2009, was substantial. – around 30ha. Over the 10 year period of the agreement – with Natural England – he received around £84,000.

This case leaves so many questions hanging in the air.

Why did Defra/Natural England take so long to publicise this rare prosecution, especially when it was of such a serious nature?

Why did Defra ignore repeated requests for further information from environmental journalists?

And will Natural England appeal against the Judge’s extreme leniency, both on the fine and the ridiculous costs award.

Natural England is supposed to stand up for England’s natural treasures – and although it should always be a last resort, it has a duty to prosecute owners who deliberately or recklessly damage the wildlife habitats on SSSIs. In this case NE has done its job and, at least as far as we can tell, given Defra’s reluctance to share the findings with the public, done that job well.

But if the Courts will not take crimes of this gravity with the seriousness they deserve, what sort of signal does that send to other landowners who may feel they can get away with similar activities?

UK conservation professional, writing about nature, politics, life. All views are my own and not my employers. I don't write on behalf of anybody else.
View all posts by Miles King →
This entry was posted in Natural England, SSSis, Uncategorized, wildlife crime and tagged damage, Natural England, Newtondale SSSI, prosecution, Site of Special Scientific Interest. Bookmark the permalink.