Euro Elections provide yet another opportunity to give Government a kicking 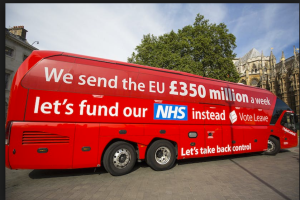 Brexit seems to throw up one crazy thing after another.

After having been told repeatedly by Prime Minister May that “no deal is better than a bad deal”, we now find ourselves in a position where not only has no deal been rejected by Parliament, but May’s own deal (which I’ll leave to you to decide whether it’s a bad or good deal) has also been rejected. Parliament appears to have collectively decided that no deal is just as bad as the only deal on the table, and rejected both.

While Westminster’s Parliament is in paralysis the other Parliament, the European one, is holding its five yearly elections. These were the elections we weren’t supposed to be taking part in. But thanks to the Government and Parliament being incapable of delivering the Brexit that would have obviated our inclusion, we now find ourselves having to take part.

It seems pretty unlikely that the MEPs elected in the forthcoming Euro elections will be in the European Parliament for their full five-year stint. Equally, it seems very unlikely that Brexit will magically happen before June 30th, thus meaning they don’t take up their seats at all. Those MEPs will be in the European Parliament, for an unknown amount of time. They will probably not be able to take any real part in the work of the Parliament, since no-one will know whether they will be there from one week to the next. Will they be treated as pariahs, or “zombie” MEPs, found wandering the corridors of Brussels, or congregating in local restaurants. It’s difficult to say.

And what no-one can doubt, aside from a few zealots, is this: The fact we are even taking part in these elections, three years after having voted to leave the EU, shows what a mess Brexit has been, right from the very start of this messy path David Cameron laid out for us all in 2015.

Now, the Euro elections are an opportunity for us as voters – to do what? Electing MEPs seems like the least useful aspect of the election, given that we have no idea whether they will even take up their seats. These elections are above all symbolic – and for many they will be either ignored, or used to convey a message – to Government. For Remains parties like the Greens and LibDems they will act as a proxy second referendum. For the Brexit Party, they are an opportunity for the electorate to give a massive kick up the bum of the government towards the hard Brexit.

I spoke to James Glancy, prospective Brexit Party candidate for the South-West of England. Glancy is a decorated war veteran and ardent conservationist, working for Veterans for Wildlife – a charity which trains veterans to help wildlife rangers protect wildlife – projects such as the Loziba wilderness project in South Africa. Glancy is also very involved with promoting the conservation of sharks, including on a Discovery channel TV programme.

I asked Glancy if he was officially the Brexit party’s environment spokesperson, but he explained that TBP only has one policy, which is that the UK leaves the EU now, without a deal. (This was slightly contradicted by Nigel Farage at the weekend when he described briefly what TBP’s immigration policy was. But there is no manifesto.)

Glancy is clearly concerned about the environmental crisis we find ourselves in – he spoke supportively of Extinction Rebellion and Greta Thunberg’s visit to the UK. He also reflected on how bad the EU had been for wildlife, citing the CAP and CFP as examples. I asked him whether he was bothered about Nigel Farage’s deep scepticism of human-induced climate change, but he was keen to emphasise that TBP is a broad church. (That is certainly true!).

Four TPB candidates emanate from the Revolutionary Communist Party (RCP), which veered from far-left to hard-right, as it morphed from RCP via Living Marxism, into Spiked Online.  This group is notoriously anti-environmental and contemptuous of concerns about climate change . Spiked’s leading writer and activist Brendan O’Neill even attacked Greta Thunberg’ autism. Glancy shrugged off these concerns, but did note that “Claire (Fox) and I locked horns on the environment” when they first met. Former RCP activist Claire Fox, a regular on the BBC’s Moral Maze programme, is standing as an MEP for the new Brexit party so it sounds like this will make the development of a common Brexit Party manifesto for the environment a challenging project.

Glancy has plans to make a positive contribution to EU politics if he is elected, particularly on shark conservation.  Will he be given the chance though? Farage has used his membership of the Fisheries Committee as a propaganda pulpit. But in one three-year period he only turned up to one out of 42 meetings and still fails to understand how the CFP affects overfishing in UK waters, as opposed to UK policies on selling quota, and its long history of promoting over-fishing.

But more fundamentally what is the purpose of TBP in the European Parliament? To mount an insurrection from within? This doesn’t seem like Glancy’s style or his motivation (even if he was in the Special Forces). His vision is of the UK providing moral leadership to the world in environment and climate action, redirecting a big slug of International Development funding towards the environment and climate action – he is keen to see a new flotilla of Royal Navy ships to tackle overfishing and protecting ocean wildlife.

Glancy is very enthusiastic about rewilding (I spoke to him just days after we had both been at the Knepp Estate) and wants to see far fewer sheep on the hills, to encourage more nature to return there. Ironically a no deal Brexit, which is what TBP is campaigning for, will no doubt help this happen, albeit in a chaotic manner. Crashing out without a deal will mean lamb exports collapse because around a quarter of all lambs produced here are for export, mostly to the EU. At least in the short term, there will be far more animals on the hills. But once they are gone a no-deal Brexit would see the sheep farming industry  contracting to a much smaller scale.

Interestingly Glancy is not in favour of a no-deal Brexit: “I don’t want a no deal Brexit. We need a free trade deal and agreements to cooperate on a range of areas.”

What of the other parties standing in the elections? Both Labour and the Conservatives are going to be punished by the electorate, as they were in the recent local elections, though for different reasons. Many Conservative voters feel they have been betrayed by their party for failing to deliver Brexit and they will vote TBP. Labour continues with its “constructive ambiguity” policy, seeking to appeal to pro-Brexit Labour leave voters in the Midlands, Wales and the North, while simultaneously appearing sympathetic to its mainly pro-remain supporters elsewhere. It may well lose voters to both the TBP on one side and the Libdems/Greens on the other.

UKIP have disappeared off into the realms of the far-right, are definitely not worth mentioning.

Which leaves the Lib Dems, The Greens and the newly-formed Independent group or TIG.

The TIGgers have also given very little away as far as their policies concerned, aside from wanting the UK to remain in the EU. Both the Libdems and Greens are unambiguously pro-remain – and it will be very interesting to see whether they succeed in garnering a significant proportion of the vote between them, but in such a way that they split the vote and end up with fewer MEPs.

But then, as this isn’t really about electing MEPs, that’s not so much of an issue.

There’s been some talk about tactical voting on the remain side, and a campaign set up by Gina Miller is seeking to tell people who they should vote for in each region. Bizarrely they are telling people to vote Libdem everywhere in England. I find this bizarre and unhelpful, especially when the Greens did so well during the Local Elections, and in the 2014 election.

If this election is about sending messages and not MEPs, then the combined vote of TIG, the LibDems and Greens is the important number for those favouring a confirmatory second referendum, for example. And our green MEPs, people like Molly Scott-Cato and Keith Taylor, have been working very hard in the European Parliament on environmental issues.

UK conservation professional, writing about nature, politics, life. All views are my own and not my employers. I don't write on behalf of anybody else.
View all posts by Miles King →
This entry was posted in 2019 Euro elections, Brexit, Nigel Farage, Uncategorized and tagged Brexit, Euro Elections, James Glancy, Nigel Farage, The Brexit Party. Bookmark the permalink.