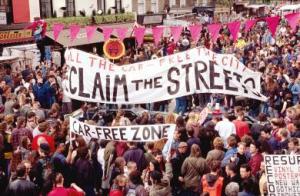 News that the Government has decided to opt for the most environmentally damaging route for the “brain belt” road between Oxford and Cambridge, reminded me that the bright future of the past – when everyone owns a car and can drive freely, anywhere, anytime – is still with us.

It is literally, and figuratively, more than half a life-time ago, when I took part in my first road protest. Well that’s not strictly true. I come from a family of road protesters. In the 1960’s,  my mum was part of a group which campaigned against part of the M11 motorway being constructed through the lovely, historic landscape of Wanstead Park in East London (they won).

In the 1970s, we lived on a suburban road which had become the most extraordinary rat-run. Down this road charged juggernauts, coaches and cars, all seeking to avoid a bottleneck, to get on (and off) the A12 which linked London to East Anglia. After years of campaigning, in 1975, the Council agreed to close the road. But there were such howls of protest from the road lobby (and I guess the queues elsewhere must have been spectacular) that the barriers were removed, after five days.

This was my first lesson in environmental campaigning – be prepared for victories to be short, and hollow.

By 1991, I was a young conservationist (still with hair) in my first professional job working for the Berks Bucks and Oxon Naturalists Trust (now BBOWT). The Roads for Prosperity policy document had been published in 1989, the same year that Margaret Thatcher made her famous climate change speech to the UN. Clearly, there was no connection being made between building new roads and climate change – at least in that Government. And when I say new roads, I mean LOTS of them.

Even looking back it seems extraordinary that anyone could have come up with the idea of making the M25 12 lanes wide, all the way round. And not just come up with the idea, but actually publish it in a White Paper. One of the other proposals was a new road (which we dubbed “The Outer M25” –  from the Suffolk Ports of Harwich and Felixstowe, all the way down to the M40, or possibly even the M4 – it wasn’t entirely clear on where they would stop (Southampton?). But the way this was being presented at local level was just a lot of individual bypasses, including for Aylesbury, where I was living. In fact, the bypass was proposed to cross the very farm in which I was renting a room. Naturally the farmer and her partner were equally horrified.

A change of heart

We thought why not mock up the bypass using black plastic sheeting and stage an event and invite the press. We made some mock traffic signs, including some particularly fine signs depicting squashed animals with tyre marks across them and managed to get on the local BBC news and in the local press. Meanwhile the Rothschilds, whose estate just up the road at Wing was also destined to be sliced in half by a dual carriageway, were unhappy. Perhaps they had a quiet private word with Mrs T.

By 1992, the anti-road protest movement was in full swing, culminating in the Twyford Down protests which galliantly failed to prevent the M3 extension, but were pivotal in achieving a change of heart. Other protests followed (including one in my own back yard at Wanstead.) and Reclaim the Streets started to organise events of a different kind. In any case, by March 1994, the Government was in full retreat, with 49 of the schemes outlined in Roads for Prosperity being abandoned – including the Aylesbury and Wing bypasses and the “outer M25” or east-west route as it was formally known. Ironically the farm is now going to be developed for nature-friendly housing, including a new Aylesbury relief road.

The idea for an outer M25 didn’t go away. Indeed, in the intervening 27 years, much of this east-west route has been built, as a series of bypasses and link roads. The missing link is from the M1 to the M40 i.e. through North Buckinghamshire, one way or another.

Which brings me to our current Secretary of State for Transport, Chris “failing” Grayling. Possibly the worst Transport Secretary ever. Under his tenure, we have seen the rail network collapse into chaos. And he is pushing the Oxford Cambridge expressway – a plan to create a new road and open up countryside for one million new homes to be built. Grayling has decided that this scheme doesn’t need a Strategic Environmental Assessment, or a Habitat Regulations Assessment. (These are legal requirements for any significant developments, particularly those which might affect top nature sites protected by the Habitats and Birds Directives and BBOWT is seeking to take Grayling to Court to challenge his decision.)

Grayling is ignoring European Law – now why might that be? Could it be because he thinks he can get away with it just as we are about to leave the EU? Could it be because he knows that after Brexit, the new environmental watchdog set to be created to replace the role previously undertaken by the European Commission (and European Court of Justice) will have no teeth? You might well ask these questions.

In traditional Department of Transport style, the public has been presented with three options for the route across east Oxfordshire and north Buckinghamshire. Although they were all very environmentally damaging, option B offered far and away the most environmental damage. The internationally important Oxford floodplain meadows are threatened, as are irreplaceable ancient woodlands and wildflower meadows in Bernwood Forest. This was pointed out to DaFT (Department for Transport). So, of course, that’s the one Grayling has chosen.

As this map notes, the road is described as a “missing strategic link” – and it’s one that the Transport Department has been mulling over since at least 1983. This map from an old Department for Transport publication shows that back then, the plan was for a road to cross Buckinghamshire along a surprisingly similar line – it’s so old that Milton Keynes isn’t shown on it!

It’s easy to imagine a scene straight out of Yes Minister, or perhaps The Thick of It. The seasoned civil servant spots that they have a right turkey in the ministerial office, and decide to blow the dust off an old file with a fading label on it “linking the M1 and the M40.”

“Minister – have you considered how we might connect Cambridge to Oxford? We’ve been doing a bit of work on the challenge, and come up with this idea….”

UK conservation professional, writing about nature, politics, life. All views are my own and not my employers. I don't write on behalf of anybody else.
View all posts by Miles King →
This entry was posted in Brexit, Buckinghamshire, European environment policy, new roads and tagged Chris Grayling, nature, Outer M25, Oxford Cambridge expressway, road protests. Bookmark the permalink.

3 Responses to European Laws set to be ignored, as Outer M25 rears its ugly head again.