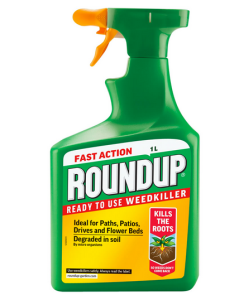 Combine two alternative, but complimentary, meanings – first, the “rounding-up” of weeds, like cattle. Just round-’em up and dispose of them. So simple.

A second more subtle meaning might also seep into our sub-conscious. Rounding up, as in getting a bit more (for our money.).

Round-up – Not only simple, effective, but also money-saving.

I first came across Round-up when I was still living at home as a teenager. My dad bought some to control some weed or other (there were quite a few) in the garden. I still have a pot (of Tumbleweed) in the greenhouse, though I haven’t used any in probably 10 years. I had a bit of a bindweed problem in the veg patch. I gave up using round-up on it, because it didn’t work. It just killed the leaves and a bit of the rhizome. I realised the only answer was digging down deep to find the long-established roots – and keep digging and removing every last bit. It’s more or less gone now, certainly contained.

It’s about 9 months now since I last wrote about glyphosate (the chemical name for Round-up). Wow I got a lot of stick for that article. There were a few errors in it, for sure. But then there was a lot of fact in it too.

Since then things have moved on. The EU came within a whisker of banning glyphosate – and it turns out the only reason they didn’t is because the German agriculture minister ignored his Government’s own policy. Schmidt is no longer farm minister. It’s pure coincidence I’m sure that, at the time Schmidt made his fateful decision, German agrochemical giant Bayer were in the process of taking over the US company Monsanto, maker of Round-up and the GM-crops which depend on it.

Despite the EU’s collective decision to give glyphosate just another five years of licenced use, many member states have decided to act unilaterally and phase its use out. Obviously that doesn’t include the UK. This is partly because of Brexit, but mainly because there is such a strong lobby (from within the agricultural industry) working here to protect it. Its main use in UK agriculture is to prepare standing arable crops for harvesting, by desiccating them and killing any weeds that might be in there.

A much more minor, but more interesting use, is by zero- and min-till farmers who use it to kill cover crops (and weeds) when preparing to direct drill their crops. Killing the cover crop at the right time releases things like Nitrogen from the cover crop, enabling the growing crop to make use of it, rather than applying artificial fertiliser. The over-wintering cover crop also reduces the risk of soil erosion, or loss of nitrogen and phosphate into rivers.

Then there was last week’s historic judgement by a US court. The jury concluded that glyphosate had caused a rare type of cancer in a groundsman who had regularly used the chemical. He’d been spraying it in school grounds. Imagine your children had been at that school. Now imagine that the school your children attend here in the UK, uses glyphosate. Because they do.

Can farmers and the agrochemicals industry continue with their “glyphosate is vital” and “glyphosate is safe” media campaigns, now that the jury is no longer out on this question?

Monsanto (which as a company no longer exists – very conveniently) has repeatedly turned to the Tobacco Industry playbook of lies, smears, character assassination, buying “friendly” scientists, and astro-turfing (setting up fake civil society groups to provide “independent” support) to prevent regulatory action on glyphosate. No doubt they will appeal the California verdict. But the flood gates have opened and thousands of others, who believe their cancers or other illnesses have been caused by glyphosate, are now going to launch their own legal actions. Perhaps some even in the UK.

It’s true that when glyphosate was first introduced as a new herbicide, it replaced earlier chemicals which were more dangerous – Paraquat for example. Paraquat is still manufactured in the UK, for export to countries which have not yet banned it. But just because something is safer than the thing it replaces, doesn’t mean it’s safe, does it. It just means that work needs to be done to find a safer alternative. That’s really part of what we might call civilisation. Why stop at glyphosate?

For me, there’s a bigger issue, which is why farmers are using so many agrochemicals (like glyphosate) to produce our food. As bee expert Dave Goulson noted recently, while the weight of pesticide use in the UK has declined over recent decades, the capacity to kill wildlife (specifically bees) increased six-fold. And that wasn’t even taking into account the impact of widespread, almost ubiquitous use of glyphosate in the countryside. That use has one over-riding impact – to remove wild flowers, which provide pollen and nectar for bees and other insects.

Would it cost more for UK farmers to produce food without using glyphosate, neonicotinoids, or the myriad other agro-chemicals currently being used? Yes it would. But it wouldn’t cost much more. And, more importantly, the cost of producing food is only a small component of the total cost of food we buy on the supermarkets shelves. So – if the UK Government decided to ban glyphosate (and to be honest there should be an immediate ban on its use in gardens and parks – and its use preparing crops for harvest) in agriculture, and food prices went up a smidgen, would anyone notice? I doubt it, given all the other factors which influence how much our food costs.

What about the use of glyphosate in zero- and min-till farming? I would suggest a three year phase out for this use. This would give time for alternative methods to be developed – and the Government should put up some funding to help develop these techniques.

But while Defra and its leader Michael Gove continue to stand in support of glyphosate (and his Biodiversity minister enthusiastically endorsing it immediately after the court finding), it will take concerted public action to shift that position.

23 Responses to A Monday morning Round-up