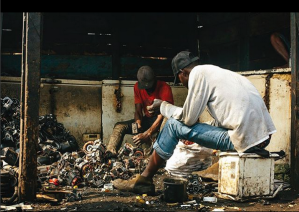 Oxfam plus other aid and development charities are rightly being castigated for the appalling actions of some of their staff, for example those in Haiti. Some also argue there is a systemic problem associated with these agencies, known as the ‘White Saviour’ problem, where people in the developed West feel they operate from a position of moral superiority – a position that is a hangover from the colonial past.

Elsewhere the entire approach to providing Foreign Aid and International Development funding is under attack  – Conservative leadership contender Jacob Rees-Mogg photo-bombed the handing in of a petition gathered by the Daily Express, imploring the Prime Minister to cut the overseas aid budget and use the money instead on domestic priorities – such as the NHS.

As if in response to this pressure, International Development Secretary Penny Mordaunt has threatened to cut off £32 million a year of Government funding which flows to Oxfam for the charity’s overseas work.

The Government’s dysfunctional relationship with the Charity Sector doesn’t stop there. Having failed to install former Charities Minister Rob Wilson as the new Charity Commission chair, it has courted yet more controversy by overruling a Parliamentary Select Committee in approving Baroness Tina Stowell, a former Conservative minister, in the post.

The Charity Commission is the regulator for the entire sector, covering everything from massive charities such as Oxfam, down to the smallest groups comprised entirely of volunteers. As the President’s Club scandal illustrated, the Charity Commission needs to have not only the full confidence of the public in ensuring charities act in the public interest, but also to be seen to be above party politics. It is even more important that the Commission is seen to be scrupulously independent of all political parties, and especially the governing party or parties. That the Government has deliberately ignored Parliament’s concerns and given this critical job to someone with very clear political connections to the governing party, risks undermining the integrity of the regulator at a time when its independence of thought and action is more important than ever.

Perhaps we should not be surprised – successive Governments since 2010 have attacked both Charity work which they perceive as political – and any perceived leftist slant within the Charity Sector. This has culminated in charities being gagged from lobbying on behalf of the interests they were created to serve; Oxfam had no sooner released its annual report on global wealth inequality, than the organisation was attacked for the actions of some of its staff in Haiti seven years earlier. Some commentators have suggested that this is, perhaps, no coincidence.

There is a conflict of ideas at the heart of this story – between those who believe that inequality, (whether within countries, or between countries), is driven by a concentration of wealth in the hands of the few, who also control the markets that determine where wealth flows; and those who believe that it is only by introducing free market capitalism across the world, that existing inequality can be reduced – arguing that “a rising tide lifts all boats” (spoiler alert: it doesn’t).

Those supporters of the free market see socialism, hiding in plain sight, within the charity sector. They argue that charities such as Oxfam are not really interested in helping poor people in developing countries to improve their lot, but are only interested in exploiting them – to capture the moral high ground, to feather their own nests, or worse. Sadly, the actions of individuals such as those working for Oxfam in Haiti provide just the sort of examples they seek, to prove their point.

And of course it’s also true that charities based in countries like the UK or other former European empires, cannot operate outside the historic context of Empire, Colony and all the horrific events that took place, from slavery to the wanton exploitation of natural resources. There is always a danger that their actions will be seen as neo-colonial; the “White Saviours” coming to save the “savages” from themselves. Charities like Oxfam really do have to show they operate to higher ethical standards than anyone else, or risk being tarred with the neo-colonial brush. It may already be too late.

Should the UK be spending billions of pounds a year on international development programmes – whether it be through charities like Oxfam, or via direct support to Governments? There are many reasons why we should. Apart from anything else, we as a country should accept that the problems blighting developing countries now, are still at least in part due to our country’s behaviour during Imperial times. You could call it reparations for past wrongs.

As a very wealthy country we have a moral duty to support poorer countries  – this is a straight matter of redistributing wealth and the same reason that the UK was a net contributor to the EU economy – to benefit countries who needed our support. And the same reason that wealthy individuals should  pay more through taxation to pay for the public services we all use; and provide support for the poorest in society to better their futures.

What, then, should the money be spent on?  Aid in emergencies is one thing, but supporting development can cover a lot of activities, and some undoubtedly fall into the White Saviour category, or worse. Perhaps a better word to use is regeneration – with those providing financial support working in partnership with people in developing countries, learning from them the best way to move forward, rather than patronising them and telling them what they need.

In truth, we in the West probably have far more to learn about regeneration from those in the developing world, than we have to offer them. A fair trade where ideas and wisdom flows to us, and in return financial support flows from us, may appeal to both those seeking to reduce wealth inequality, and those wishing to use the power of markets to improve people’s lives.

this post first appeared in my No Tern Unstoned column for Lush Times.

UK conservation professional, writing about nature, politics, life. All views are my own and not my employers. I don't write on behalf of anybody else.
View all posts by Miles King →
This entry was posted in Charities campaigning, international development, No Tern Unstoned, Oxfam and tagged Charity Commission, No Tern Unstoned, Oxfam. Bookmark the permalink.