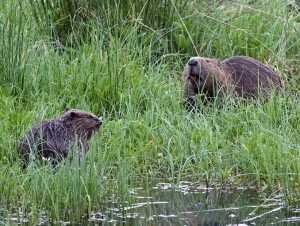 Is there any comedy value to be extracted from the fact that on the day the Brexiteers capitulated (or were outmanoeuvred) on membership of the Single Market, leading Brexist Michael Gove chose to announce that Beavers would be released in the Forest of Dean and into the wild? Read on to find out.

Sharp-eyed readers (yes that’s all of you) will recall that the Forestry Commission had been working on a project to use beavers to reduce downstream flooding of a village (Lydbrook) in the Forest of Dean, Gloucestershire, but that this had been squashed by the unimaginative Minister Therese Coffey. Why would Coffey have taken against the aquatic rodent? Could it have anything to do with her enthusiasm for artificial drainage, as I outlined in a previous post. Could it be related to her enthusiasm for Grouse Shooting? We may never know.

Either way, Environment Secretary Michael Gove has over-ruled her (it’s difficult to imagine she will be pleased about that) and given the go-ahead for the Forestry Commission to release the beavers. When I say release the beavers, obviously they will not be released in the sense that the River Otter Beavers were released. They will be in a pen.

So far so good. What’s perhaps even more interesting is that Michael Gove has given a very strong signal today that other Beaver introduction schemes in England will be looked on favourably by the regulator Natural England. Natural England, as we know, does what Defra tells it to these days. Here’s the new guidance. 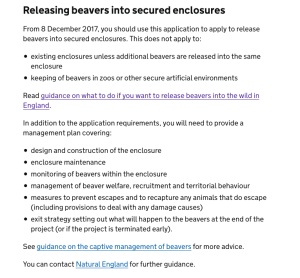 And this one if for legal releases into the wild. 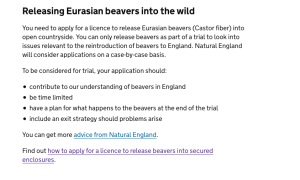 yes you read that correctly. Gove has just announced that the Government is approving the release of Beavers into the wild. These releases will need to be time-limited (though of course it doesn’t specify what the time limit is) and should include an exit strategy if problems arise. That would be recapturing the beavers.

This is a big step forward for rewilding and natural flood management in England.

I may still have grave doubts about Michael Gove on all sorts of other levels, but for this I applaud him.

UK conservation professional, writing about nature, politics, life. All views are my own and not my employers. I don't write on behalf of anybody else.
View all posts by Miles King →
This entry was posted in Beavers, Michael Gove and tagged beavers, Michael Gove. Bookmark the permalink.