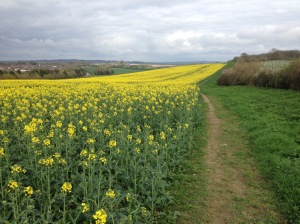 As the process of changing from an European agriculture policy into a UK one starts, I’m delighted to publish a guest blog by former Natural England grassland specialist Steve Peel. Steve looks at how successful agri-environment schemes have been (in England) and how they could be improved.

The state of UK nature

‘Our wonderful nature is in trouble and needs our help as never before’. So wrote Sir David Attenborough in the foreword to the State of Nature report (Hayhow et al, 2016). The report went on to say ‘Many factors have resulted in changes to the UK’s wildlife over recent decades, but policy-driven agricultural change was by far the most significant driver of declines’.

Yet 30 years ago agri-environment schemes were initiated across the UK with the specific intention, amongst others, of halting and reversing such wildlife declines. And these schemes were expanded over that period such that they were generally recognised as among the most ambitious in Europe. In England alone payments to farmers in these schemes have been approximately £400 million per year since 2005. So have these schemes been ineffective and if so, why? At this time, when post-Brexit policies are being formulated, the answers to these questions are crucial for the future state of nature.

Ecologists have been publishing studies and critiques of schemes for many years. These tend to be at a European scale. Kleijn et al (2006) concluded that schemes gave only marginal or moderately positive effects on biodiversity and that it was not possible to tell whether this was due to the measures being ineffective, sub-optimally implemented by farmers or applied in the wrong location. Batary et al (2015) concluded that the general lesson is that schemes can be effective but are expensive and need to be carefully designed and targeted.

In his very engaging British Ecological Society presidential address in December 2015 Bill Sutherland suggested that 34-58% of agri-environment interventions were ineffective, with resultant squandering of significant amounts of money and effort on well-intended but ineffectual and largely untested land management interventions. This was a global critique but the audience may have concluded that UK schemes have a weak science base. Consequently Clare Pinches and myself gave presentations at BES December 2016, seeking to explain the schemes in more detail.

We focused on Higher Level Stewardship (HLS), launched in 2006 and aimed at maintaining and restoring high-value environmental features. Grassland options and their associated supplements represent over 40% of the total spend on HLS and we used as our example the HLS options for restoration and creation of species-rich grassland. The design and targeting of these options was based on a long series of experiments and surveys within the Defra Agri-environment R&D programme and summarised by Pywell et al (2012). This showed that:

These options can work brilliantly: in 2010/11 Natural England advisers identified 73 sites that they thought had been most successful and these were independently surveyed (Hewins, 2013; Wilson et al, 2013). Most were creation rather than restoration. Eighty five % met or exceeded the minimum threshold to qualify as BAP Priority Habitat and typically this took 8-15 years.

But what do independent surveys of random samples of agreements show? Creation of species-rich grassland from arable appears to have been much more successful than in earlier schemes. But restoration of existing grassland, on which we have spent ten times as much (£113 million), has been very disappointing – see table 1.

After 8 years in an option specifically designed to restore species-richness, with payments of at least £200/ha/year, less than a quarter had improved in condition, and some had actually declined. Likely reasons for these poor results are that 27% of the sites had a P index of 2 or more – higher than optimum. And most importantly 81% of sites had no record of seeds being introduced. This sample was of agreements set up in the first year of HLS and might be ascribed to teething problems, but similar issues were identified in later agreements eg Mountford et al 2013.

There were concerns about the quality of HLS delivery from the start in 2006 and these were recognised by the Making Environmental Stewardship More Effective (MESME) project in which 18 recommendations on quality were agreed by Defra (Natural England, 2013). These included the need for:

Boatman et al (2014) studied HLS outcomes and the relationship with adviser input. They found, as did Mountford et al, that performance was good for many of the metrics, with the majority of agreements working well. But this covered all outcomes including, for example, historic environment and landscape. The situation was less satisfactory for the more demanding biodiversity outcomes such as on grassland. There were positive correlations between outcomes and:

Seventy-one percent of agreement holders said that the advice they had received had been important or very important to the successful delivery of their HLS agreement. However, many agreement holders were concerned about the number of changes in project officers. In 7 years only 24% of agreements had kept the same adviser, and 23% had 3 or more advisers.

A telling comment made in that report was ‘Lack of follow up visits and changes in adviser personnel led to a sense among agreement holders that early expectations in terms of support were not fulfilled throughout the life of the agreement. In some cases this led to increasing disillusionment and declining commitment as the agreement progressed’.

Lawton et al (2010) concluded that England does not have a coherent and resilient ecological network and that we need ‘more, bigger, better and joined’ core sites. In response government said ‘We want to promote an ambitious, integrated approach, creating a resilient ecological network across England’ (Defra, 2011). This intention has recently been reiterated (Natural England, 2016) and since over 70% of England is agricultural land much of the restoration, creation and management of sites will have to be done by and with farmers.

The evidence from HLS shows that even if we have a farming scheme soundly based on science it will not work well enough unless quality is inbuilt and it is managed and resourced sufficiently to sustain a relationship of trust between adviser and land manager.

The signs are that Natural England and Defra are not keen to be open and honest about this evidence:

The story of agri-environment since 2005 has been one of tragically unfulfilled potential. Basic objectives have, as in predecessor schemes, been widely achieved: grassland and other habitats not ploughed up or agriculturally improved, landscape features such as stone walls and buildings maintained and restored, grassy margins round arable fields created. And there are many examples of much more challenging objectives being achieved. But there are also many, many examples of agreements which do not reach the standards required to deliver the Lawton vision. On arable land this is often because uptake of the more demanding options has been too low. In contrast on grassland, where over 40% of the HLS budget has been spent, uptake of demanding options has been high but outcomes have often been woefully poor.

This should not be seen as an indictment of NE advisers – they are committed and hard-working. But they have not been appropriately deployed. When HLS was launched in 2005/6 they were told to go out and make sure they spent the budget. This resulted in many agreements being rushed through. Even once the scheme was more embedded the message from above was very much focused on number of agreements and area of land covered with far too little focus on quality when setting up agreements. This might not have mattered so much if there had been adequate aftercare but the HLS design, which was based on 3 visits in 10 years with Indicators of Success assessed on each visit, was not delivered. Some agreements were not visited at all until it was too late to change the outcomes. And that was before the major staff cutbacks of recent years.

This matters because not only is the same thing happening with the new scheme, Countryside Stewardship, but it is likely to happen all over again in any post-Brexit scheme. The sort of outcomes required to deliver Lawton – create new habitat, restore and extend existing habitat – require skills which are not part of commercial farm practice, as well as timeliness and attention to detail. Expecting this to be achieved on the scale required with the resources deployed in HLS, let alone the current reduced resources, is unrealistic. Yet that is what policy-makers and ministers will expect unless the evidence of past delivery is made so crystal clear to everyone that they cannot risk repetition. And, crucially, if the necessary resources are not available then instead of spreading them thinner and thinner and failing to deliver in many places, admit it and at least deliver good value for money in some places. This is surely what is required of ministers and public servants: openness and honesty (Committee on Standards in Public Life, 1995).

Steve Peel was a senior specialist in eco-agronomy with particular responsibility for grassland, for Natural England and predecessor bodies, prior to his retirement in March 2017. He worked on agri-environment schemes for 30 years and chaired the group that designed the grassland options in Environmental Stewardship and Countryside Stewardship. He is a past president of the British Grassland Society and a founder member of the British Ecological Society’s Agricultural Ecology Group. The first three quarters of this text was published in the British Ecological Society Bulletin, vol 48:2, July 2017.

UK conservation professional, writing about nature, politics, life. All views are my own and not my employers. I don't write on behalf of anybody else.
View all posts by Miles King →
This entry was posted in Agri-Environment Schemes, agriculture, Brexit, Common Agricultural Policy, guest blogs, Uncategorized and tagged Agri-Environment Schemes, Brexit, Guest Blog, Steve Peel. Bookmark the permalink.

62 Responses to Guest Blog: Agri-environment – a need for detailed scrutiny, by Steve Peel