Time to rename Defra the Ministry of Agriculture and Fieldsports 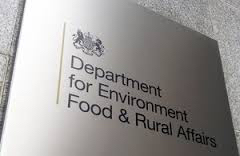 While all talk of the Greenest Government Ever (anyone remember that?) has been quietly abandoned, another question arises.

I have crunched the numbers for you.

Our Secretary of State for the Environment, Farming and Rural Affairs is Andrea Leadsom. She has overall responsibility for all the elements of DEFRA, which are very wide ranging. But Environment is the first word in Defra, and it would be reasonable to expect our Secretary of State to meet external organisations whose primary interest was the environment.

Available figures for her first six months in office indicate that of her 30 recorded meetings (excluding 4 roundtables):

From this we can see that, contrary to what one might expect, our Secretary of State does not feel the need to meet Environmental Organisations, preferring to focus on the Food in Defra, or perhaps the Farming in MAFF. Yes our Secretary of State met the Countryside Alliance, but the only environment NGO she met (other than where they attended Roundtables) was the Woodland Trust.

She also met a pro Brexit pressure group, a former head of research at a pro-Brexit thinktank that Leadsom was closely involved with, who now runs their own PR consultancy; and a representative from a neoliberal thinktank funded by a New Zealander billionaire based in Dubai.

George Eustice is the Defra Minister responsible for food, farming, fisheries and better regulation. He has been busy with 43 meetings in that 6 month period. Of those (excluding 3 roundtables)

It should come as no surprise that our farming minister has mostly met representatives from the farming, fishing and food industry. As well as meeting pro Brexit pressure groups and neoliberal academics he also found time to meet the chair of the Farriers Governing body to discuss a Bill passing through Parliament. Farriers shoe horses. Eustice was also able to meet 3 marine conservation NGOs before attending an EU fisheries Council; and met CPRE to discuss their farming after Brexit report.

Lord Gardiner who, some of you will remember as former Deputy Chief Executive at the Countryside Alliance,  is the Defra Lords minister. He is also responsible for rural issues, climate change adaptation, animal health and welfare; litter, national parks, the Pollinator Strategy and various other bits and pieces.

You might expect that he would have met with some of the Bee Coalition members, as Pollinators are such a hot political topic. Lord Gardiner held a rather modest 13 external meetings in 6 months. Of these, excluding a roundtable:

So although Lord Gardiner found time to meet his former workmates at the Countryside Alliance, he held no meetings with anyone on bees or other pollinators. And his climate change adaptation responsibilities had to play second fiddle to more important things like dogs and horses.

Dr Thérèse Coffey is Defra minister responsible for the natural environment (including biodiversity) rural opportunities (including rural childcare), floods, air quality and other things. After a quiet first 3 months she got busy with 23 meetings in the 6 months to the end of 2016.

Among a wide variety of other meetings she did find time to meet an academic to talk about Lion conservation, a food waste campaigner; and a wildlife trade NGO. UK conservation NGOs didn’t figure much at all on the list, aside from The Woodland Trust and an introductory meeting with Wildlife and Countryside Link.

So apart from the Woodland Trust, which appears to be gaining some access to Defra ministers, the UK conservation movement is remarkably absent from these meetings, while the fieldsports lobby has done very well. Is this unreasonable, disproportionate access though?

“Well obviously we’re very good, but the 100k members & being widely accepted as the voice of the countryside helps too.”

Bonner also claimed that the CA “met lots of other ministers too”, but I had a good look through the ministers meetings for relevant departments like DCLG and DCMS and even BEIS and DFE, but I found no meetings with the CA in the period Oct-Dec 2016. There was one meeting with Brandon Lewis at the Home Office in September 2016. Perhaps others might find some elsewhere (Foreign Office? MoD?).

If having 100,000 members qualified the Countryside Alliance (which remember is not a Charity, and has just had its application to become a charity rejected by the Charity Commission), then on that basis the RSPB with over a million, should have had 20 meetings during that time period, and the National Trust, with 4 million members 80 meetings. That is of course absurd, but given that neither the RSPB nor National Trust had any (recorded) meetings in such a critical 6 months for UK nature, does raise questions. If membership/supporter numbers is a poor indicator, perhaps subscription income is a better measure. Countryside Alliance subscription income from the most recent available accounts  (2015) is £3.2M. This compares with £8M for the Woodland Trust, or £48M for the RSPB. So that’s not a great indicator either.

Perhaps Tim Bonner is right, and it is just down to the Countryside Alliance being a brilliantly effective campaigning organisation. Perhaps he is also right that Defra ministers regard the CA as “the Voice of the Countryside.”

It may also true that the UK conservation NGOs have stopped putting too much effort into gaining access to Defra ministers, on account of their being not in the least bit interested in nature, the environment or biodiversity. This seems unlikely though (the former rather than the latter.) as UK nature, especially the EU laws that have to some extent stemmed the tide of decline these last 40 years, are under direct threat thanks to Brexit.

The evidence, such as it is, does point towards the fact that the fieldsports lobby and the Countryside Alliance in particular, are gaining disproportionate access to Defra ministers.

Perhaps of greater concern and what is incontrovertibly true though, is that the Farming and Food industries have full and free access to Defra ministers. In this regard, it is probably best to call Defra by one of its previous name, the Min of Ag.