No gathering Eggs for May: it has to be Easter

Can it really be true that there isn’t enough to keep our Prime Minister busy these days?

Theresa May, while cosying up to the Extreme Islamic Kingdom of Saudi Arabia, still finds time to lambast the National Trust, for removing the word “Easter” from their egg hunt (except of course they didn’t.)

Isn’t this a blatant example of virtue signalling (normally an accusation hurled at social justice warriors and other occupants of socialist/liberal snowflake world) by the Prime Minister?

The National Trust, in a presumably very lucrative deal with American food multinational Kraft (who I imagine have no interest in such trivialities) has renamed the traditional Easter Egg Hunt, in some places at any rate, the Cadbury Egg Hunt.

However much you sugar coat this, understand this is about money changing hands – large wads of it. 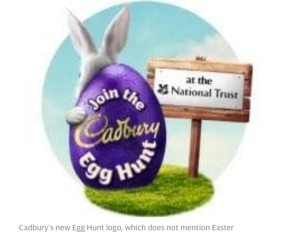 The National Trust quite rightly though do not want to put off non-Christians from taking part in the festivities. But Vicar’s daughter Mrs May has taken umbrage.

After all, (Easter) Egg hunts are all about Christianity, aren’t they?

Well no, actually they are not. Christ was not crucified holding an egg, nor did he carry an egg through the streets of Jerusalem.

The egg is a very ancient symbol of rebirth at the time of the vernal equinox. Ancient Persians decorated eggs (perhaps not chicken eggs?) to celebrate their New Year Nowruz, at the time of the Spring Equinox. This tradition continues to this day and long pre-dates Christ – though it is thought that Christians adopted the practice fairly early on in Christianity’s history.

And of course the Easter bunny is no bunny (and nothing to do with Christianity). It’s a hare – thought to symbolise Eastra, Norse goddess of the Dawn (in this case the dawn of the growing year). Or possibly it was Hares which pulled Norse god Freya’s carriage, Freya being goddess of fertility.

One theory is that people thought hares were born from eggs because of the “forms” they produce while lying up in pastures. Whatever the origins of the beliefs, Hares and Eggs are bound up in our modern day celebration of Spring.

But really, who knows? These things are, literally, the stuff of legend and people will continue to debate their origins forever more. It doesn’t really matter where they originated.

What this has to do with Christianity is obscure, to say the least. What it does indicate though is how ancient customs rooted in people’s reverence for nature still survive (albeit in cryptic forms) in our culture, despite fears of an ever increasing disconnect with nature.

Perhaps Mrs May’s PR advisors merely spotted the opportunity to provide a welcome distraction from the daily tales of Brexit cock-ups (why did they decide to leave any mention of Gibraltar out of the Article 50 letter?) we all seem to be enduring these days.

UK conservation professional, writing about nature, politics, life. All views are my own and not my employers. I don't write on behalf of anybody else.
View all posts by Miles King →
This entry was posted in easter, National Trust, symbolism, Theresa May, Uncategorized and tagged Easter Eggs, National Trust, Theresa May. Bookmark the permalink.

8 Responses to No gathering Eggs for May: it has to be Easter