Farmland nature is in intensive care

A week has past and I’m still at home. I finished my latest course of antibiotics yesterday (yay) and am drug-free for the first time in 3 weeks, for which I am very thankful. Now I need to start work restoring my gut flora. The thought gives a slightly different perspective on the phrase “People Need Nature”, but our internal ecology is as much part of who we are, as the external nature that lives around us.

Latest estimates suggest that for every human cell in our bodies, there is a bacteria living with us.  Some are helpers, many just along for the ride, and a few mean us harm (as I have found out.)

So many thoughts have been pinging around my head while I have been unable to do anything else, that I probably have 10 blogs worth to write. But I thought I’d start by following up from the State of Nature launch and the role of intensive farming in the loss of nature from England’s farmland. I wrote about the launch what seems like years ago now, but was actually only 6 weeks ago.

What do we actually mean by intensive farming? Rural commentator, surveyor and serial writer of letters to the Times, Rob Yorke, pointed me towards an interesting paper from Rob Fuller, Paul Dolman and colleagues, recently published in the Journal of Applied Ecology. In the paper, the authors question our preconceptions of what the semi-natural really is.

What is the semi-natural? For those unfamiliar with the phrase, the semi-natural or semi-natural habitats are those which have evolved as a result of human activity (usually agriculture or forestry) in such a way that at least some wildlife still flourishes while the land produces food, fuel etc. Semi-natural habitats include  flowery hay meadows, ancient woodlands, wood pasture, lowland heathlands, chalk downlands, arable fields with farmland birds and arable weeds, ponds, moorland and so on.

The authors of the paper suggest that what we now think of as the semi-natural is very different from what was actually going on on farmland before 1750. They use 1750 as a cut-off because around that time a complex set of changes started to take place in land use which “resulted in a massive reduction in the extent and quality of habitats.”

They rightly point out that farming underwent a significant period of intensification during the late 18th and early 19th century. Superphosphate for example was first manufactured in 1843 in Deptford, in response to the rapid exhaustion of “British” guano deposits off the coast of Namibia.  And of course even before that, farming could have been said to have been pretty intensive. Downlands were grazed by sheep until there was literally no grass left, commons were grazed as much as commoners could get away with. Heathlands were grazed hard, gorse was cut for bread ovens, peat was cut for fuel, gravel was dug when needed for building work or roads. You can imagine the scene.

This is all a far cry from the careful – not to say kid-gloved management of modern “semi-natural” nature reserves. And as the authors point out, the losers of this approach are those species which depend on things like irregular disturbance. The technical word is heterogeneity, but patchiness is just as good. Many species depend on disturbance at different scales (think a bare patch of ground a foot across, up to landscape patchiness over hundreds of square miles)  and over different periods of time – from a few months to decades (perhaps even centuries).

Juniper is a great example of this, which I spent quite a long time studying and working on its conservation (all the reports used to be on the Plantlife website but it looks like they have gone now). The seeds from mature juniper bushes need bare ground to germinate, but once they germinated they then need to be protected from being grazed off. In the long past this would have been achieved through occasional heavy grazing – which is why they did well on places like downlands, commons and heathland – places which would have been grazed very hard, then left for a long time before being grazed hard again. It’s likely that larger scale historic events – the agricultural depression following the Napoleonic Wars, the Great Agricultural Depression of the 1870s, the subsequent Agricultural Depression of the 1930s and the wholesale decline in rabbit grazing after the introduction of Myxomatosis in the 1950s, provided the big scale changes in grazing patterns that allowed waves of juniper populations to appear. Needless to say nothing has happened on this scale since the 1950s and the Junipers born then are now moribund and past reproductive age.

So it’s fair to say that there was plenty of “intensity” going on in farming in the past. Can anyone therefore claim that intensive farming, or intensification of farming, has caused nature to disappear from farmland?

Farming has got less intense over the past 25 years, according to Smith, based on some rather crude metrics – kilo’s of pesticide used, areas of crops, numbers of stock kept. Smith suggests that, as British farmers are the best at fusing conservation and production,  increasing food production here will create a net benefit for global biodiversity, by displacing production elsewhere in the world.

There is some truth to the notion that if we produce less food here and import more, without worrying about where that food comes from, then we could be responsible for more environmental damage. But there are so many interlocking variables as to make that calculation an extremely complex one, far from the crude maths Smith applies.

Has farming become less intense in the last 25 years? It depends on which way you measure it. Glyphosate (round-up) use has increased by 400% in the UK over the last 20 years. Maize production has grown exponentially during the same period. 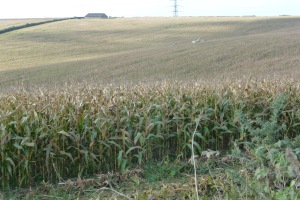 Maize for biogas grown in the Dorset AONB ©Miles King

Neonicotiniod pesticides weren’t being used at all 20 years ago. Now their use is widespread and their impact on insect life is increasingly being shown to be devastating.

But there’s a bigger issue here.

While on some level it could be argued that farming is less intensive than it was 25 years ago, is this even the right time frame to be discussing the issue? The main loss of semi-natural habitats took place from 1950 to 1970, just at the time when all the major recording schemes for things like farmland birds, for example, started. Dramatic though they are, the declines from 1970, detailed in State of Nature and elsewhere, only show a small part of the graph.

I would tentatively suggest that intensive farming may not be the right phrase to use to describe the reasons why farmland now has next to no wildlife in it. As Fuller, Dolman et al show in their paper, we now only have a small subset of the much wider spectrum of semi-natural habitats that existed pre 1840 (or 1750 – the cut-off date is pretty arbitrary).

While the area of land that supported nature hadn’t diminished particularly in the two centuries from 1750 to 1950, the types of habitat did shift. But their analysis ignores the fact that other places were created that at least provided a part replacement – in the new industrial landscapes – the legacy of which is now still with us on brownfield land. And while the authors are right to state

“the kinds of complex ‘traditional’ land management systems .. had largely disappeared in England before the adoption of modern, chemical-based farming systems in the middle decades of the twentieth century”

Where does this leave us? Do we need to find an alternative lexicon to describe the reasons behind the loss of nature from farmland?

We certainly do need to continue to challenge the propaganda that Guy Smith, Robin Page et al put out, that somehow nature has disappeared from the farmed landscape due to other reasons – predators for example, or urban development.

No-one has yet managed to explain to me how 97% of wildflower meadows, or 75% of chalk downland, has disappeared in 70 years thanks to predators. And urban development still only covers 12% of England.

Whatever words we use, the facts are the same. Modern farming methods, together and individually, have caused nature to disappear from the farmed countryside. Nature on farmland is now in intensive care. And we don’t know whether the patient will pull through or not.

UK conservation professional, writing about nature, politics, life. All views are my own and not my employers. I don't write on behalf of anybody else.
View all posts by Miles King →
This entry was posted in agriculture, agrochemicals, Intensive Farming and tagged Agriculture, Intensive Farming, nature, neonicotinoids, rob yorke. Bookmark the permalink.

22 Responses to Farmland nature is in intensive care