The Nature of our State

I was looking forward to attending the State of Nature launch, but decided in the end to stay at home at get on with some writing that is now becoming urgent. But despite my noble intentions, I became swept up in the excitement and spent too much time on social media, debating what it all meant.

The State of Nature report shows what we already know, that our nature is disappearing, particularly from farmed landscapes. I’d go further and suggest nature has disappeared (to all intents and purposes) from many farmed landscapes. I read through the report and saw ever more detailed analysis of data stretching back decades. There really is no question about what has happened or is happening. If I had one gripe with the report, it is that, once again, the focus is all on birds and mammals. Practically all of the case studies, that make up the bulk of the report, apply to these two groups. Even the photo released for use with the story was of a hedgehog. It’s a great image, laden with symbolism.

When the BBC reported it, they felt duty bound to provide “balance”, getting the NFU to respond. NFU responded in typical manner – misdirection (it’s predators), obfuscation and denial. NFU attacked the report for suggesting that farming was continuing to intensify. NFU vice president Guy Smith claimed:

“However, since the early 1990s, in terms of inputs and in terms of numbers of livestock and area of crops grown British agriculture has not intensified – in fact it’s the reverse. Therefore it makes little sense to attribute cause and effect to ‘the intensification of agriculture’ in the UK in the last quarter of a century when there hasn’t been any.”

Reading through the State of Nature report, there is no mention of intensification of farming, though evidently it was discussed in the interviews. So NFU created a straw man to knock down. Farming isn’t getting more intensive – its the opposite, therefore farmers must be the custodians of nature now. But of course that depends on how you define intensification. Weight for weight, less insecticides are used now than 30 years ago, but that’s because neonicotinoids are so deadly they are only used in tiny amounts, not sprayed on to whole plants, but as a coating for seeds, which are then spread throughout the plant as it grows. And ever more damning evidence points to the impact of Neonics on insect populations, with obvious knock on effects for insect eating birds and mammals. Glyphosate use has increased by 400% in the last 20 years.  Even if you aren’t convinced that glyphosate is toxic to people (wait for this health time bomb to go off) the impact of this huge increase in its use across the 25% of the UK which is under arable crops, is profound. What few wild plants of arable landscapes that had survived the years of rapid intensification (from the 1950s to 1980s) are now subject to another dose of poison to finish them off.

It strikes me that the BBC should not be providing the NFU the opportunity to use these tactics to undermine the sound science behind the State of Nature report, in the name of “balance”. This tactic was used for decades by Climate Change deniers to undermine the science behind Climate Change. Eventually, after much procrastination, the BBC decided to change its editorial guidance and remove the opportunity for spurious (and malign) challenges to Climate Change science. It’s about time they started applying this “false balance” approach to organisations like the NFU.

But the NFU are far cleverer and have been in the game for longer than anyone else. It can be no coincidence that, on the same day as the State of Nature report was launched, the NFU launched its Back British Farming campaign. They literally parks their tanks ie tractors, on Parliament’s lawn, the grass of Parliament Square. That is a masterclass in the exercise of soft power, if ever I saw one. But they didn’t stop there.

After the Prime Minister and Environment Secretary had their photos taken in front of the tanks, I mean tractors, the NFU then handed out wheat lapel pins to as many MPs as they could find, in advance of Prime Minister’s Questions. So those of us who were watching, were greeted with visions like this – Craig Williams of Cardiff North proudly showing the country his support for British Farming. 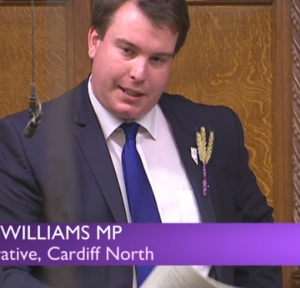 The wheat sheaf or wheat ear is a very powerful symbol and has been used throughout history because of its power and depth of meaning.

From Roman times, here’s Persephone/Demeter/Ceres/Proserpina rising up from the ground holding ears of wheat (and poppies).

The RSPB and their partners in the State of Nature report, presented an excellent, well argued case, backed up with evidence so strong that it cannot be denied.

And the NFU said “Back British Farming”, which in itself means nothing – who would even argue that Britain shouldn’t grow food? And who else would do this than farmers (though the NFU’s vision of farming and farmers is a very narrow one)?

To focus merely on the words misses the point. The NFU used the power of imagery and symbolism to show the political power they wield, to embed in the mind’s of politicians, the media, and even the public, that they are the people to talk to, they have the answers, they have the deep, almost mystical understanding of how things grow, and how we are kept alive and nourished with food. It’s no surprise that organised religion started at the same time as farming and those deep layers of meaning, belief and mysticism around how food is grown (and who grows it) still lie within us all.

26 Responses to The Nature of our State