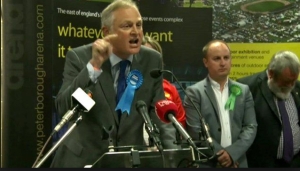 So Stewart Jackson has been given a job in Government (again). Jackson is now on the lowest rung of the Governmental ladder, as Parliamentary Private Secretary to Brexit Minister David Davis. He had previously briefly reached the same position, as spear carrier to Owen Paterson, when he was at the Northern Ireland Office, in 2011.

Having recently discovered that I, along with many others apparently, have been blocked on twitter by Peterborough MP Jackson, I thought you would be interested to see a short history of  his recent tweets.

Shortly after the Brexit vote,  journalist (of the right) Rupert Myers, made a perfectly reasonable comment that the Brexit side had been untruthful on number of key points during the campaign, but now expected those who didn’t believe the lies, to be cheerful about the result.

this is fairly normal for Jackson who is known for his rudeness and generally priggish behaviour  (I had the misfortune to meet him during my short stay with Buglife). Harry Potter author J K Rowling then retweeted Jackson’s abuse to her followers – 13,100 of whom retweeted it, I among them.  For this, it would seem (for I had not sought to directly engage with Jackson on anything that I can recall) I was blocked.

One wonders whether he has a social media intern, day after day drudgingly working their way through all 13,000 twitter users and blocking them. 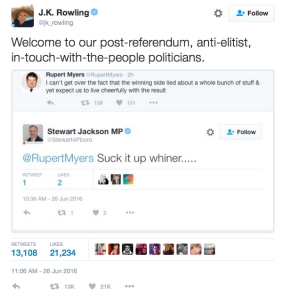 Jackson was clearly cock-a-hoop about the Brexit vote – he has been attacking the EU at least as long as he has been an MP, probably far longer. He started to lay into those who he felt were traitors to the cause, people like former Foreign Secretary Philip Hammond, who had rather unenthusiastically campaigned for Remain. Jackson (a back bench MP) consigned Hammond to the political scrap heap on the Sunday after the Referendum, claiming that Cameron had tried to woo Boris to the remain side by offering him Hammond’s job at Foreign Affairs.

Given that Boris has indeed now got the Foreign Secretary role, albeit a shrivelled version, with international trade lopped off one side, and Brexit negotiations lopped off the other, might suggest Jackson had some sort of clairvoyant skills. Jackson could not possibly have predicted it would be Theresa May giving Boris that poisoned chalice though, nor that Hammond would be her right hand man at Number 11. That’s Politics!

Jackson also had May in his sights, a couple of days later. He had spotted a plot to install “remainer” Theresa May, by the old guard of the party, viz Lord Heseltine and Ken Clarke, plus John Major’s old flame Egwina Curry, and of all people, Blair’s enforcer Alistair Campbell. It’s a tinfoil hat conspiracy worthy of the most wild-eyed Corbynite. Clearly the May-Campbell brigade were going to ditch Brexit and we were all going to be living in Remainia.

For Jackson, May was another traitor – after Boris was stabbed by Gove, Jackson fell in behind Andrea Leadsom.

Leadsom was “excellent”, “principled” and with “real world experience”. Leadsom and Jackson are both members of the Fresh Start group of Tory MPs who would happily privatise their own grandmothers if they could. The “real world experience” Jackson had accrued before becoming an MP included working for Lloyds bank for ten years in the run up to the banking crash of 2007. Which means that Jackson was a bank manager in central London (and a small business manager)during the time when Lloyds was busy lending money to some people and businesses who had no chance of being able to pay it back. At the same time Lloyds were mis-selling payment protection insurance to people taking out mortgages – Lloyds had to set aside £3.6Bn to repay them once they (along wth other banks) had been found out. In the end it was the Labour Government which stepped in and acquired 41% of Lloyds group to save it from going bust. Jackson had already left by then. Of course it’s ridiculous to lay the blame on Jackson for the global financial crisis, but it does illustrate what his “real world” experience was, before becoming an MP.

Jackson was right behind Andrea Leadsom, as he had been part of the team, with fellow Brexiteer Liam Fox, who campaigned for David Davis as Tory Leader in 2005, when David Cameron surprised everyone and won. He tweeted from her launch event

“Leadsom outlying her strong case to be leader…”

Given Leadsom’s err imaginative embellishment of her CV, Jackson’s typo  was unfortunate.

On the same day, Jackson indicated where he sits on the political spectrum (not for the first time), retweeting a list of supposed Remain “lies” from a UKIP local council candidate, who peddled some untruths of his own in the run up to the Referendum eg this one on clean beaches and the EU.

After the shock announcement that Leadsom was pulling out of the race to be Tory leader, Jackson, seamlessly moved to back Theresa May, as if she was the one for him all along.

He then kept up the barrage of pro-May tweets…perhaps he was making a bid for the job of ambassador to Arslikhan.

And now has been appointed PPS to David Davis.

And if you want to read him in full flow then take a look at this from 2006, while Muslim members of his Peterborough constituency make their feelings about him pretty clear in this piece.

The issue of Immigration, whipped up as it has been, by people like Jackson, certainly played its part in the Referendum. But recent research indicates that areas with a significant proportion of non-British born people living in them overwhelmingly voted Remain (bear in mind EU nationals did not have a vote). It was the areas which had experienced the greatest increase in arrivals (since the  EU enlargement in 2004) which voted for Brexit.

Yesterday Theresa May stated in Prime Minster’s Questions, that the Conservative Party wolud be busy over the next few months “bringing this country back together” after the Referendum (which her party had dreamt up, and instigated).

Perhaps she has decided that putting Stewart Jackson on the leash of being a Government employee (and therefore not able to speak out in the way he is accustomed to doing), is a good place to start.

UK conservation professional, writing about nature, politics, life. All views are my own and not my employers. I don't write on behalf of anybody else.
View all posts by Miles King →
This entry was posted in Andrea Leadsom, Brexit, immigration, Uncategorized and tagged Brexit, Peterborough, Stewart Jackson. Bookmark the permalink.