Bring back the Bison. or Wisent. 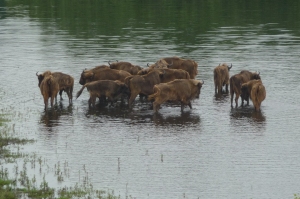 Wisent in the lake at Kraansvlak © Miles King

Amid the chaos, recriminations, headless chickens and acrimony of the Brexit vote fall-out last week, I went to the Netherlands with a group from Rewilding Britain. I have an informal role on their policy advisory group, and generally like what they are doing, so was delighted to have been invited along. We were on a trip to see the European Bison, or Wisent (pronounced Vissent), as it should really be called, which had been reintroduced to the Netherlands by fellow organisation Rewilding Europe.

Wisent were effectively extinct in the wild in the 20th century, when there were just a handful of animals in zoos spread across Europe and Russia, and a small population in the Bialowiesza Forest in Poland. There are now 5000 animals, thanks to a careful breeding programme, and animals are being returned to some sort of wildness, in places across Eastern Europe, and one place in the west, Kraansvlak near the Dutch coast.

Our guides from Rewilding Europe told us that Wisent were effectively gone from the wilds of Europe by the Middle Ages, by which time they were confined to hunting forests and reserves (such as Bialowiesza).

Kransvlaak is an area owned by one of the Dutch water companies, an area of stabilised dunes. In the not too distant past much of the Netherlands was covered by mobile dunes, which could swallow entire villages. So a great effort was made to stop them from moving, and this created areas like the Kransvlaak. For a long time the area was just grazed by rabbits and deer, but disease wiped out the rabbits and the deer alone were unable to prevent the dunes becoming covered in scrub (Spindle especially – which is not something we find here in Britain) and started to lose the open ground species, for which it was known to be special. Species such as the Sand Lizard, ground-nesting bees and wasps, and flowers of the dunes. Initially deer, cattle and Konik ponies were introduced, none of whom were interested in the scrub.

The idea of (re)introducing Wisent emerged. There are currently 14 animals in a breeding herd. Some have radiotracker collars on and you can follow their movements on their website. Unlike the Wisent at Bialowiesza, the Kraansvlak animals are not fed in winter, so find their own food. They are quite used to finding grass and other food, under the snow. Wisent graze happily alongside other grazing animals, including horses and cattle, though they are clearly “top” herbivore and will chase away other animals if they don’t like the look of them. This goes for dogs too. Contrary to popular belief they are no more dangerous than cattle, to people. The enclosure at Kraansvlak is 350Ha with a high voltage perimeter fence. There are plans to extend it, using habitat bridges, to a total of 4000ha.

The current enclosure has a Bison Trail running through it, which people are free to walk along. This is what we did. There is a great deal of effort expended on educating visitors, especially those with dogs, about what not to do near the Wisent. But if an animal becomes habituated to people, eg because it has been fed, that animal is removed from the enclosure, because of the risks that it will attack someone.

As you can see from the photo above, Wisent love standing in water. They also like breaking open thorny scrub (hawthorn, gorse) and eating it. Areas that were dense scrub have been returned to flower-rich open dune grassland, as after the Wisent have broken open the scrub, the horses and cattle graze the returning vegetation. Wisent will eat leaves berries and bark of scrub and trees  stripping the bark off quite large trees.

Wisent do other things like bathing in the sand and also creating “bullpits” where the young bulls hang around and playfight. In doing these things they create lots of bare ground. 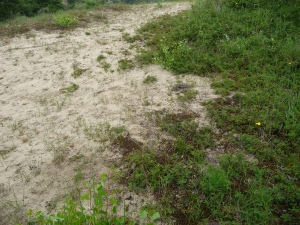 Bare ground provides habitat for a wide range of plants invertebrates, fungi, and the birds and mammals that depend on these things. the Wisent also use regular tracks so have created a network of tracks and bare ground patches of different sizes. They also appear to have abandoned some areas of bare ground they had created, and these were revegetating. And of course they carry seed of plants from one place to another.

Some suggest that Wisent was never native to the British Isles during the holocene and therefore should not be considered as part of our extinct fauna, or considered for re-introduction. But absence of evidence is not evidence of absence – and Wisent remains have been found from Doggerland, the lost realm between Britain and the Continent. Wisent is still perilously rare and most of the surviving animals occur in Eastern Europe and the Caucasus, so holding populations in the UK would help in case a disease killed off populations elsewhere. And looking at how Wisent behave in the Netherlands, in what is effectively the same ecosystem as we have, suggests to me that they would be an ideal animal to have in large areas of wildland, where nature is the paramount purpose of that land.

I’m not suggesting that Wisent should be returned to the wilds of Britain, in the way that Otters have been, or Red Kite. But Wisent could be a driving force for creating large areas of wild land  – thousands of hectares, given over to nature, with no agriculture or forestry happening there. If it can happen in the Netherlands, that densely populated, and intensely managed land, then it can definitely happen here.  And the Dutch experience is that the Wisent themselves have created a great deal of new economic activity – people love them and want to come and see them.

We have a huge amount of public land in Britain – some of it has limited or no public access (Military land) so creating large enclosures for Wisent is a real possibility. Could Wisent be walking across Salisbury Plain in the future?

Kraansvlak is on the edge of a number of urban areas. © Miles King

We were very lucky on our trip. As soon as we arrived at the viewing point, the Wisent were there, on the far side of the lake, standing in the water. We watched them for a while then our guides suggested we try and get a closer look. So we made our way around behind them, climbing a dune. From the top we looked down onto the herd, which were just 50m away. They seemed unperturbed, but there were various half jokes about who could run fastest and who would need to be carried, in case they turned on us. But they took no interested in us. Eventually they moved off back down to the lake again. The sound, and the sight, of their walking through the lake, the slow rhythmic splashing, evoked another place and another time. We could have been in Africa on the savannah, or we could have been mesolithic hunters, waiting for our moment to strike, risking our lives to eat meat that day.

Thanks to our guides from Rewilding Europe for a fascinating day, and to Sir Charlie Burrell and everyone at Knepp, for organising the trip.

UK conservation professional, writing about nature, politics, life. All views are my own and not my employers. I don't write on behalf of anybody else.
View all posts by Miles King →
This entry was posted in grazing, rewilding, Wisent and tagged Kraansvlak, rewilding, Rewilding Britain, Rewilding Europe, Wisent. Bookmark the permalink.

43 Responses to Bring back the Bison. or Wisent.