Last week was a meadows week for me, visiting Hagge Woods, followed by the annual Floodplain Meadows Partnership steering group meeting, in Northamptonshire.

Hagge Woods was a 25 acre barley field in 2012. It’s been converted into a meadow using wildflower seed from a commercial seed supplier, supplanted with locally collected seed of other plants (not in the seed mix), which is being grown on and planted out by volunteers.

Or is it a wood? It started out in 2012 as a Diamond Jubilee plantation on the Escrick Park Estate, but then changed direction- to something more interesting. Within the meadow are little sapling of trees which are going to grow on to become much larger shrubs and big trees. Slowly but surely the area which is now meadow will disappear as the trees grow and shade out the meadow flowers. The Hagge Woods Trust, which is running the project, aims for 60% woodland cover and 40% meadow, with the meadow existing in a network of woodland glades and rides. Much hazel has been planted and the plan is that this will be coppiced. 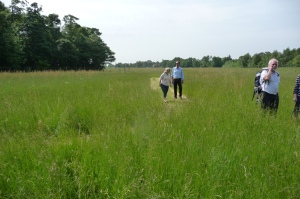 Woodland (and meadow) expert George Peterken, talked to us about Wood Meadows. Wood meadows are an ancient land-use, still found in parts of Scandinavia, and montane areas of Europe. They may well also have existed in the UK. Wood Meadows were, as the name suggests, managed both for hay, and for wood. Meadow areas were cut (and sometimes grazed), while trees were either coppiced or pollarded, to produce tree fodder, firewood and other types of wood product. One advantage of growing trees and meadow together is that the deep roots of the trees draw up water and nutrients from deep within the soil, which are delivered to the meadow through leaf fall. Historically, leaves were raked up, burnt and the ash scattered across the meadow, to restore fertility removed in the hay.

Tree Fodder? Yes, for millennia, trees were managed to produce winter fodder for animals. And of course places with very long winters, where animals needed to be kept alive, such as in Scandinavia, mountainous areas of Europe, or indeed the UK, tree fodder was an important part of the farming system. Holly was a particularly important source of tree fodder, and places where holly’s were pollarded to produce such material, were called hollins. There are still plenty of places in the UK with hollin or holly in the place name. Other trees and shrubs were also used as fodder in the UK and across Europe, including Oak, Ash and Elm. This article explores the history of tree fodder in more detail.

Whether Hagge Woods will truly become a wood meadow (in the historic sense) or not doesn’t really matter. Neither meadow hay nor coppice wood have any significant economic value within our current agricultural system – though they certainly do elsewhere in Europe where High Nature Value farming is still alive, no thanks to the Common Agricultural Policy. What I think makes wood meadows interesting is that they provide opportunities for people to experience a wide variety of nature in a relatively small place.

Imagine changing an urban park where all the grass is kept short and all the trees are managed either as large standards or as “lollipops”, into an urban wood meadow.  There would be areas of short grass, long grass meadows, shrubs that are kept small, coppiced trees, pollarded trees. There would be, just like with Hagge Woods, opportunities for the local community to get involved with the management of the park, planting out flowers to enrich the amenity grass swards, hay-making, and winter tree management. I’m not suggesting that football pitches or dog-walking areas should all be converted to wood meadow. Of course amenity areas maintained as such as essential, but at the moment far too much public land is maintained unthinkingly.

As I have written before, the Floodplain Meadows Partnership is to my mind one of the best conservation initiatives in the UK. It is a true partnership, where everyone who is involved, leaves their organisation’s agendas outside the door, and works together to achieve a future for these fabulous meadows. Floodplain meadows are very ancient, dating back to at least Roman times. It’s worth thinking about this for a minute. The typical wildflower meadow, the dry type which has declined so dramatically over the last 100 years, is a very different beast.

Dry meadows have come and gone with the changing needs of farming – I wrote about this in Nature’s Tapestry. Witness how many surviving meadows are to be found on ridge and furrow – a reminder that they were cultivated in the past.

Of course it appears that dry wildflower meadows are unlikely to make another comeback, given the shift from horsepower to fossil fuels, but who can tell?

Floodplain meadows, where they have survived, have quite a different character to dryer meadows. Although they are managed in the same way, with hay cut followed by aftermath grazing, the conditions  – especially the way that the ground water under the meadow behaves, mean that a quite different group of plants occur in them. You can read much more about these plant communities in the excellent Floodplain Meadows Technical Handbook. Each floodplain meadow is subtly different from the other, given the complex interplay between geology, hydrology, soil development and management history.  We were lucky enough to visit an exceptional floodplain meadow in Northamptonshire, Achurch Meadow. The sheer variety of different plant communities there, and the way they smoothly graded one to another, was a sight to behold. I have certainly not seen a meadow which supported the two native Sanguisorba’s (Great Burnet, Salad Burnet) and the two native Filipendula’s (Dropwort and Meadowsweet) all growing together, before. Meadow Saxifrage was also plentiful. 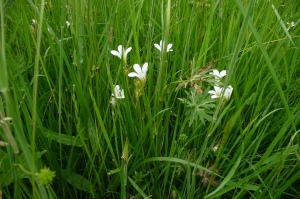 Amazingly, this particular meadow had not been given the status of Special Area of Conservation under the EU Habitats Directive. Fortunately the landowner is proud to have such an extraordinary area for nature on his land, and it is designated an SSSI.

We met another farmer who was also immensely proud to have flood meadow on his land, and was busy restoring several fields which had been agriculturally improved, back to flood meadow or similar habitats. He was pleased to welcome the floodplain meadows group to his farm, though he had to disappear to help his neighbour round up some frisky steers which had got out. One thing really stuck in my memory: he explained to us how he liked to go down into the wet end of the flood meadow by the river, where the cattle would lie in the morning. He would stop the quad bike and just sit with them. They were happy because they were in a place they liked (the meadow) and he explained that their contentment created an aura, which he could physically feel. Experiencing their aura took all his troubles away and have him a sense of peace that he could not find anywhere else.

This is not the sort of thing you usually hear from a farmer; farmers are very practical people, not prone to sentiment at all. And indeed what he was describing was not sentiment, but a visceral connection to nature. I said to one of my colleages, that we need to clone him!

I will finish today with another meadow related story. Plantlife has been stirring up something of  a hornet’s nest, resulting from a blog they published in the use of wildflower seed in meadow creation “keeping the wild in wildflower meadows”.

In the blog Plantlife criticized the use of wildflower meadow seed for creating wildflower meadows, especially creating identikit meadows, or MacMeadows as they termed it. Plantlife suggested that wildflower seed suppliers were not supplying seed of native plants, or were supplying “generic” seed mixes with the same set of a few plant species used everywhere. Oxeye daisy was singled out for attention  – it was ironic that, at one of the floodplain meadow restoration projects we visited in Northamptonshire, the farmer was rather sad that the seeding had not been particularly successful, as he was hoping to see have seen stripes of Oxeye daisy appearing in his meadow.

It’s not surprising that this has gone down like a lead balloon with the wildflower seed industry. Godfather of the quality wildflower seed suppliers, Donald MacIntyre of Emorsgate Seeds, took particular umbrage (see his comment below the Plantlife blog); given his surname this is hardly surprising and it was insensitive for Plantlife not to have considered this before coining the phrase. Nick Mann from Habitat Aid also responded on his own blog, complaining that Plantlife were tarring all wildflower seed suppliers with the same “generic” brush.

I understand Flora Locale are also unimpressed, given that they have been campaigning on this issue for nearly 20 years and didn’t even get a name check in the blog. Flora Locale worked with Plantlife to produce a position statement on habitat creation (and use of wildflower seed) which many organisations signed. And looking back to 1994, when Plantlife published “Seeds of Destruction” and, for the first time, really highlighted the problem, it’s fair to say that a great deal of progress has been made.

This is, to an extent, an example of “not making the best the enemy of the good.” It’s good that wildflowers are being sown in places where they were otherwise missing – Hagge Woods is a great example of this. It’s unrealistic to expect meadows to spring, fully formed, from the ground of arable fields. They don’t. Meadow plants do not tend to have long seed banks, relying on individual plants to live short lives and reproduce abundantly (eg yellow rattle) or live for a long time and reproduce occasionally (eg Great burnet). Meadow plants also “hitched a ride” from one place to another in the past, through the movement of animals, and the movement of hay, around the country, or even between countries.

We shouldn’t get hung up on the idea that meadows are particularly “natural”. They are a wonderful creation arising from the interplay between human activity and nature. They were created for a specific reason, to produce hay and grazing for animals. That purpose has now (mostly) gone, and if we want them to survive, beyond a few treasured relicts, then we need to find a new purpose for them. That purpose could well be to bring joy and an experience of nature into people’s lives.