Memories of the Boleyn Ground

I’m going to get a bit nostalgic now, so please forgive me, and if you don’t want to read on, look away now, as they say.

Today marks the last game to be played by West Ham United at Upton Park, and just writing that sentence has caused a lump in my throat and a tear in my eye (that’s enough cliches – ed).

Affectionately still known by Hammers supporters as the Boleyn ground (strangely I seem to remember it being pronounced Bol-een from my childhood but that could be a trick of the memory) as it was built on the grounds of Green Street House, originally built in the 16th century. One tower, known locally as the Boleyn Castle, survived until 1955. The Boleyn tavern next to the ground continues the historic association with Henry the 8th’s most vilified queen.

My grandparents lived a stone’s throw away from the ground and my grandad was a supporter before the first world war, at a time when West Ham had only recently moved into Upton Park. I’m pretty sure he did go to the FA cup final when we lost to Bolton Wanderers in 1922 in the first match to be played at Wembley, when the crowd was so large that the pitch had to be cleared by mounted police before the game could start.

My dad, Peter, was born there in Upperton Road before the war (it would have been his birthday yesterday) and had been a lifelong supporter of the Hammers, through the many downs, and occasional ups, over a period of 70 years. He lived through most of the Blitz, only being evacuated for a couple of weeks and going to see the Hammers was probably a highlight of the week. That part of East London was severely damaged during the Blitz and V weapon campaigns, and my dad used to point out places where V1 flying bombs had landed, or which had been wiped out by the V2 ballistic missiles.

Seeing West Ham win the FA Cup then European Cup Winners Cup in 64 and 65 were definitely high points for him, though he claimed me arriving a couple of months after West Ham won the FA cup gave him more joy.

When he died in 2010 he asked that we scatter his ashes at Upton Park. My mum approached the club chaplain who confirmed that we could put his ashes at the ground. When we arrived, he explained that ashes were no longer scattered on the pitch, as the players didnt really like running over grass with a grey sheen on it (and they knew why). So the ashes of the many who had made the same request  were buried under a Lombardy poplar by the main gates to Upton Park, in the corner of a car park.

We used to go to all the home games from when I was about four until I was about 16; after that I don’t think I went to quite as many (especially having saturday morning school in the 6th form.) Both my brother and I went to music school on a saturday morning and there would be a bit of a rush to get home, have some lunch (my mum always made sure we eat something substantial often a proper lunch, before we went) and then jump in the car to get down to the match. We would collect a friend of my dad’s and his son Chris on the way.  We used to park about 15 minutes walk away in a back road and as we approached the ground little knots of supporters would form bigger knots until suddenly, when an invisible threshold of critical mass had been crossed, we were in “the crowd”. The crowd was quite a scary place for a very small boy, not just because everyone was so big, but there was an undercurrent of excitement, of vaguely perceived threat. This was the late 60s early 70s when football hooliganism was at its height and West Ham was probably the place, the heart of skinhead culture. It wasnt unusual to see what I now realise were completely inebriated teenagers up for a fight looking for targets.

Once through the turnstiles, we bought our programme, excited to see who was playing – those earliest days we had football God Bobby Moore, along with the England 66 heroes Geoff Hurst and Martin Peters. But the team didn’t stop there – Harry Redknapp on the wing (chants of Harry Harry, Redknapp Redknapp, Redknapp Redknapp Harry Harry) and the young Trevor Brooking and Billy Bonds joined the side in 1967. West Ham was also very unusual in having one of the first black players in the First division, Clyde Best. It’s difficult to imagine his bravery to play in front of a crowd with so many racists, overt and covert.

Did I mention I was very small? my dad used to bring a stool for me to stand on. It was tubular steel, a sort of dull green colour with a wooden seat. I would be standing on this stool, teetering is perhaps a good word, on the south bank terrace. At the top of terrace was a group of hard core, many skinhead, supporters. From time to time they would all push hard down the terrace, forcing other supporters to move down Even though there were the crowd barriers to stop crushing (a sign at the exit stairs implored everyone to “remember Ibrox“) I still got knocked off my stool from time to time. This was pretty scary.

After a few years we moved from the South Bank into the Chicken Run. This was very small area of standing near to the pitch on the east side of Upton Park. There was no pushing or anything like that, it was all very civlised, apart from the shouting, much of which was obscene, and often very funny. From our new vantage point we could watch, sometimes with horror, as the South Bank hooligans attempted to break into the visiting supporters area, which had as I recall quite a tall fence around it.

One thing that I will never forget is the noise of football match especially a high octane one like a cup tie. It’s the sound of twenty or thirty thousand people making a similar noise, a kind of howl, all at once. And now I think about it, it must have something to do with the acoustic of the ground as well – as the stands, throw the sound back from their depths. Also, the smell of roasted peanuts – you buy a bag of roasted monkey nutss and the ground was littered with the shells afterwards – as we would crunch, often disconsolately, out of the ground after another defeat. My dad used to get so emotional – he would be shouting at the players, giving advice, admonishment, frustration – but when we scored or even just an inspired pass from defence  – or one of Alan Devonshire’s mesmerising runs inside from the wing, the sheer expression of joy was well yes indescribable. You really did have to be there.

The high point for me was the cup run in 79-80. We went to all the matches except the semi-final replay and yes I still have my FA cup final ticket. 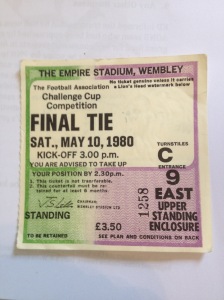 When Trevor Brooking steered the ball past the Arsenal keeper Pat Jennings (from where we were standing it seemed like he had put it in with his knee, but we discovered later it was that rarest of things, a headed goal from Trev) the sound was incredible and the look on everyone’s faces seemed a mixture of sheer joy and disbelief that it should be Trevor Brooking of all people who should have scored in the FA cup final.

I was lucky enough to hold the FA cup that summer, as it toured around East London. It was brought to our local cricket club (where I played, very badly!) as the club chair knew West Ham people – it had ribbons of claret and blue tied to its handles, naturally. I still have the picture somewhere. It’s a very very heavy cup.

After I moved away from London my brother Simon continued to go to Upton Park with my dad, right up until the end – it brought them together, they shared moments of high drama (eg the Di Canio years) in a way I did not have – I suppose I was a bit envious. Simon also died a few years ago.

I occasionally watch a match on the TV but I’m not an avid follower. But the Boleyn Ground does feel like a part of my history, my background – part of what makes me who I am. I think that being exposed to the ugly and brutal far-right from a young age certainly influenced how I see politics and society and may well have played a part in developing my views about social justice and working for something you believe in.

UK conservation professional, writing about nature, politics, life. All views are my own and not my employers. I don't write on behalf of anybody else.
View all posts by Miles King →
This entry was posted in Simon King, West Ham and tagged Boleyn Ground, Simon King, Upton Park, West Ham. Bookmark the permalink.