It’s new moon: a goat must be sacrificed 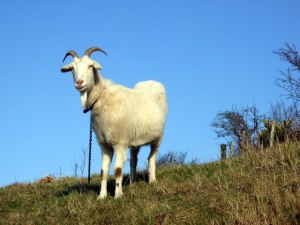 Some random musings on natural capital.

Sacrifice may have been a way for societies to avoid creating ecological debt.

Ecological debt is another way of describing the damage to nature inflicted by human activity. Arguably ecological debt starts when modern humans appear and start to kill off megafauna, so it goes back over 20,000 years. Perhaps it goes back even further to the time when ancient humans discovered how to control fire.

Every economic transaction creates ecological debt. This started when the first human killed an extra mammoth, to place in cold storage for the winter. It speeded up considerably when neolithic proto farmers collected seed of individual grasses that held onto their seeds longer than others, and cereal farming was born. And when gold and silver started to be extracted from the ground to create “money” things ramped up another magnitude.

Now money is created electronically – by central banks or through the creation of commercial debt. Ecological debt is created every time an extra pound Euro or dollar is created.

Sacrifice was a way for people to repay ecological debt, or at least give them the feeling that it was being repaid. In some cases, there could be a real reduction in debt.

Sacrificing an animal to bury under a newly planted fruit tree would provide real fertility for that tree. And sacrificing a domestic animal to provide meat for a large wild predator (such as a Tiger) would enable the Tiger to survive and at the same time reduce the chances of it eating other stock, or indeed people.

Human sacrifice may have been used to quell angry gods who would otherwise wreak vengeance on people, in the form of plagues, crop pests, drought or flood. Those angry gods may actually have been the consequences of an unsustainable accumulation of ecological debt – deforestation, soil exhaustion, mono-cropping.

Our ecological debt has grown out of all proportion and is now threatening the future survival of people on earth.

Now we need to reintroduce the notion of sacrifice, but without the ritual killing of animals (or people). We need to sacrifice money. Burning piles of cash won’t really address the problem – most money in circulation is electronic. In any case, simply reducing the amount of money in the system will not address the ecological debt, though it may help reduce the ecological deficit.

The sacrificed money has to be spent on reducing the ecological debt.

For instance, 10 million pounds could buy you a luxury yacht. This would generate an ecological debt, comprised of the ecological footprint of the materials used in the manufacture, plus the energy costs of running the yacht, and ultimately the cost of its disposal when it was no longer wanted.

But whoever has the £10M decides whether to buy the yacht of the rainforest. They may well choose the yacht. There is a discussion around philanthropy here, but that’s for another day.

So the decision needs to be taken out of the hands of the person with the money. This is, after all, the basis for things like regulation and taxation.

Going back to the point that ecological debt is created every time new money is created, the sacrifice needs to operate at the source of the problem.

Let’s argue that for every £100M of money created by central or commercial banks, £10M is also created as the money sacrifice and deposited in an ecological account. You could call it a tithe, which is another form of sacrifice.

Whereas in the past the tithe was paid to the church and used by the church as it saw fit (which may have included helping the poor and disabled, or even commissioning works of art, but did not generally redeem ecological debt), this modern tithe would be allocated to spend reducing the ecological debt, according to the greatest need.

Who would actually incur the debt? Would it be the bank that created the money in the first place, or the debtor who asked for the loan?

If the bank was a central bank, then the ecological debt would be incurred by that country, and its currency would be slightly devalued, with a small contribution to inflation each time it happened.

As inflation (beyond a small amount) is generally seen as a bad thing, this might serve to introduce some serious thinking about the benefits, or otherwise, of creating new money (currently happening through quantitative easing.) Rules might be introduced to ensure that ecological debt was not incurred through the creation of new money – using a “polluter pays” principle, ecological destructive projects looking for loans would be rejected.

In the spirit of looking for the solutions to problems at their source, commercial banks should pay the tithe on every commercial loan they create. Again, they would then impose conditions on the loans to their debtors to ensure that the ecological debt was repaid by them, or that the activities the loan funded not only did not incur additional ecological debt, but actively repaid it.

Of course this would lead to possibly endless discussions around priorities, but it would do two things which I think would be beneficial. Firstly, it would make a direct connection between money and its impact on nature – it would incorporate the notion of natural capital into the notion of capital, at source. Every time money was created,  natural capital would be on the agenda. This should serve to affect behaviour and decisions.

Secondly, and less importantly, it would create a significant fund to help reduce the human impact on nature.

Obviously I’m not an economist and there may be very good reasons why this wouldn’t work and is nonsense. Please let me know what you think.

The title is taken from Numbers 28:15

UK conservation professional, writing about nature, politics, life. All views are my own and not my employers. I don't write on behalf of anybody else.
View all posts by Miles King →
This entry was posted in ecological debt, economics, Natural Capital, sacrifice and tagged ecological debt, Natural Capital, sacrifice, tithe. Bookmark the permalink.

9 Responses to It’s new moon: a goat must be sacrificed