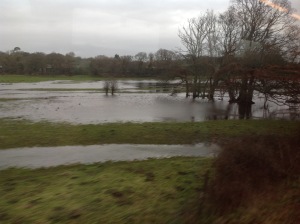 Monday was Natural Capital day at the Green Alliance. They produced a report called Natural Partners, in which they sought to explain that Natural Capitalists and Nature Conservationists could get along fine, instead of bickering. On the same day, they held a Natural Capital debate in London, which I went along to. There was a very good turnout.

I read the report on the train to London. At first I was not sure about it; was it entirely sensible to frame the debate as either traditional nature conservation, or natural capital? Other options are available – for example a broader environmental stance, or indeed the new kid on the block – rewilding.

A deeper problem for me was that the report failed to mention the vital importance of education and raising awareness. Education and raising awareness drives societal change at a number of levels – in terms of personal (consumer) choice but also, more importantly, changing perceptions of the value and importance of nature to people; and the need to change the way people live with and in nature. This has profound implications across other activities – people will not support the need for more regulation or incentives (the main policy levers that nature conservation uses, according to the report) to support nature if they do not understand its value to them (and society). Education and awareness raising also drives pro-environmental behaviours, which are in themselves beneficial to nature eg people changing consumption habits.

Perhaps the biggest problem with the proposed solution laid out in the report ie Natural Capital and Nature Conservation approaches are complementary,  was that the report entirely omits the problems associated with framing. Cognitive Linguistics research shows time and again that one frame dominates others. If the dominant frame is an economic one, only the economically relevant values of nature will be considered in decision making, or by individuals.

For a clear exposition of framing in nature debates, here’s an excellent blog from my namesake Miles Richardson. Others who have written deeply about the problems of using economic language as a frame to view actions for nature include Sian Sullivan and Common Cause Foundation. I would recommend reading both of them to gain a wider understanding of this critical issue.

I thought the authors of the report really struggled to find examples of where a Natural Capital approach was actually working. The report gave an example of flooding and the Natural Capital approach drawing in private sector funding. In reality this has not happened – the facility has been there for five years but the amount of private sector funding has been pitiful. £600m of the Govt’s £2.3Bn flood defence budget is expected to come from outside Govt. So far, only £61M has come from private business sources, while cash strapped local authorities have stumped up £190M.

I was not really convinced that the comparison between the pros and cons of Natural Capital vs Nature Conservation really worked (eg Page 15).

I would suggest that in both cases, the assumption is contested. The environment existed before the economy was created (the economy is, after all, a social construct) and will exist after the economy has long gone.

the report suggests that for a natural capital approach, Natural assets are prioritised according to utilitarian values;  whereas for nature conservation, the priorities are based on threat, or for cultural or scientific values. But these are also utilitarian values.

But things got better – the report (to me) seemed to be putting forward the position that Natural Capital views nature through the lens of business – what can nature provide to a business bottom line, and what risks can nature put in the way of increasing shareholder value?

Let’s be clear – and this is not a criticism of business: Businesses are not there to increase natural value, they are there to increase sharedholder value. Sadly, in most cases, there is an inverse relationship between the two.

The main problems causing the environmental crisis are a burgeoning global population, unsustainable consumption of natural resources; and the increasing disparity in global wealth patterns. If a Natural Capital approach is going to do anything, it has to recognise these facts and act accordingly.

The report concluded, wisely, that “only in rare circumstances could a Natural capital approach lead private investment into restoration of lost or degraded ecosystems” but, intriguingly suggested that it may work best in the sphere of productive land-use.

The debate was quite interesting – I though Professor Georgina Mace spoke the most sense, urging great caution with how Natural Capital may end up not only delivering nothing new, but providing a justification for business as usual to continue. Prof Mace made a heartfelt plea that Natural Capital approaches could work but was clearly doubtful whether they would. Mace also pointed out that a Natural Capital approach has to recognise that there will be winners and losers – and that disparities may function between different sections of society, across different locations, and at different points in time – eg future generations may pay the cost of our inability to protect stocks of natural capital now.

Duncan Pollard, a senior executive from Nestle, who are funding the Green Alliance work on this issue. He was trying very hard to show how seriously Nestle take Natural Capital, but made a particularly telling remark – that any additional costs associated with adopting Natural Capital accounting would be passed on to the consumer. As far as Nestle are concerned, this is not about changing their business model.

Questions came from the floor – many were very sceptical of the Natural Capital approach. One commentator mentioned that he was struck by the scale of finance moving into this area.  Apparently the green Bond market is booming and scale of city money is colossal. One green bond released last week as oversubscribed by eight times.

I was lucky enough to be able to ask a question – so I said this:

Yes it got a few laughs but it was a deadly serious point. Georgina Mace echoed my concerns and Johnny agreed that was a great danger of Natural Capital going to the dark side (ok he didnt actually say that).

Johnny pins his hopes on a Natural Capital ethical framework or charter, which he is working on and hoping IUCN will adopt. But if it’s only voluntary – how will it be enforced?

I came away feeling even more strongly than before that, at least the way the Natural Capital debate is going, it is being captured by corporate interests who will use it for their own benefits. I’d like to believe that Natural Capital can be a force for good, as Professor Mace hopes for, but I fear it will not.