Somerset Levels Drainage: Back to the Future 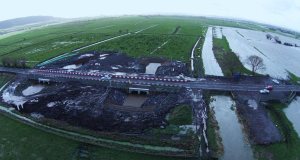 While the debate over flooding continues to ebb and flow, it seems that the newly minted Somerset Drainage Authority, sorry Somerset Rivers Authority, have found their way back to the bright shiny future of the 1950s, when electricity would be too cheap to meter; and we would all be traveling around in flying cars.

The SRA announced that they will be widening the artificial drain known as the Sowy River “by as much as Four Metres” along a 10km stretch of this drain. As well as widening the Sowy, a flood bank along its edge will be raised further. Another enormous land drain, the King’s Sedgemoor Drain will be dredged and deepened, and its flood banks raised.

The main beneficiaries of this multi million pound scheme (funded by the taxpayer through the Local Enterprise Scheme) will be farm landowners, whose land will flood less than it would have done. This will enable them to increase productivity, get rid of their low productivity  permanent grassland and grow more of crops such as Maize, the most environmentally damaging crop grown in Britain.

There are also claims that it will reduce urban flooding though there is no mention of this in the 20 year SRA flood action plan. Indeed it is difficult to see how the Sowy river would do much for urban flooding, at least compared to allowing Aller Moor to flood more naturally.

The area which the Sowy drains is also valuable for wildlife. The northern section of the Sowy passes through King’s Sedgemoor Site of Special Scientific Interest, which is also part of the Somerset Levels and Moors Special Protection Area. To the south of this area of wildlife-rich wet grassland, lies an area of most intensive agriculture, on Aller Moor. One unanswered question is whether the proposed works on the Sowy will lead to the wildlife of the Somerset Levels being damaged. Given that King’s Sedgemoor is protected under European legislation, the SRA will have to show that widening and deepening the Sowy will not have any damaging impact on the wildlife there.

There are alternatives – allowing low-lying farmland to flood during periods of high rainfall, just as it used to for centuries. But this would require a change in attitude about what farmland is for, and what farm subsidies are for.

This is just one more example of the regressive approach this Government adopts when it comes to tackling flooding. We should be reconnecting rivers such as the Parrett to their floodplains, allowing them to flood naturally, not developing ever more expensive hard engineering solutions, with all the long term maintenance costs they demand. And, given that climate change is predicted to increase the extent and intensity of flood events, what is the carbon footprint associated with removing the around 200,000 cubic metres of peat that widening the Sowy will entail?

5 Responses to Somerset Levels Drainage: Back to the Future