Ecomodernists split over links with neoliberals and libertarians 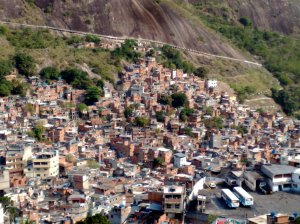 The Ecomodernist vision: a future where most live in megacities

Ecomodernist Mark Lynas was rather rueful in his Guardian article yesterday, where he openly regretted having agreed to speak at Owen Paterson’s UK2020 “thinktank”, alongside ecovandal Paterson and his libertarian brother in law “rational optimist” Viscount Matt Ridley. He described the decision of the Ecomodernists to associate themselves with these free market fundamentalists as a “screw up”. According to Lynas it was Michael Schellenberger, one of the leading lights in the Ecomodernist cabal, who insisted on going ahead with the event at UK2020, despite Lynas’ misgivings. Collective responsibility would, you would think, be a guiding ethic of the ecomodernists, but evidently not at this particular juncture.

Perhaps Lynas might usefully remind himself of (attributed to) Lenin’s useful idiots.

Lynas finishes his confession with the plaintive cry that Ecomodernism is still an exciting new adventure, and that this mistake of aligning themselves with the neoliberal and neolibertarian right was a “blip” from which we can all move on. There is a special plea to George Monbiot to reconsider his position, since Ecomodernism is strongly supportive of rewilding, something close to George’s heart. George has been highly critical of Ecomodernism, which has upset the EMers as they evidently saw George as an inspirational leader for their movement. While Monbiot is sceptical, Ridley is evidently enthusiastic about EM and is keen to shape the agenda – yesterday on twitter he said

“I think it’s crucial not to make climate change a litmus test for eco-mods. all science can be challenged.”

The EM manifesto supports the IPCC goal of keeping temperature increases below 2 celsius, while Paterson and Ridley are happy that things are fine until a 4C increase. Still, Schellenberger is happy to cosy up to the likes of Ridley and Pile, expressing admiration for libertarians on many things.

Given Paterson, Ridley, Pile et al’s outright antagonism to “environmentalism” (whatever that is), by aligning themselves so enthusiastically with them, it seems that Schellenberger and the EMers are doing exactly the opposite of what they are claiming, to reduce polarity in the debate about how to ensure humanity has a future on this planet. Interestingly, Ben Pile’s fellow “Living Marxist” Brendan O’Neill launched a scathing attack on the Ecomodernists yesterday, criticising them for even mentioning the environment. Perhaps, if extremists like O’Neill are attacking them, they can’t be all bad.

This has been a difficult birth for EM in Britain. Perhaps they need to think about who they jump into bed with next.

UK conservation professional, writing about nature, politics, life. All views are my own and not my employers. I don't write on behalf of anybody else.
View all posts by Miles King →
This entry was posted in ecomodernism, libertarians, neoliberalism and tagged ben pile, ecomodernism, Ecomodernists, libertarians, mark lynas, Matt Ridley, neoliberals, Owen Paterson. Bookmark the permalink.

3 Responses to Ecomodernists split over links with neoliberals and libertarians