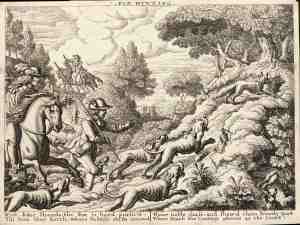 One would imagine the Countryside Alliance to be a place that welcomed free speech.

Indeed the CA (both in England and Wales, and in Scotland) lobbied against the Lobbying Act, because they were worried it would restrict their rights to influence policy over things they particularly care about, like hunting foxes with dogs.

It is also interesting to recall that the CA sought to use the Humans Rights Act to overturn the ban on hunting resulting from the Hunting Act in 2004. The HRA and the European Convention from which it stems, also underpins our Freedom of Speech. In their most recent Annual Report (as a charity), the CA emphasise how they were “vocal for freedom of speech“.

So I was a bit taken aback to read that the new CA chief exec Tim Bonner is calling for Chris Packham to be beheaded and that his head be placed on a platter and delivered to said Bonner at CA mansions. No – of course, Bonner isn’t making such an extreme remark in public. But he is calling for the BBC to sack Packham, and he is claiming that Packham is “promoting an increasingly extreme agenda” and also that he is a “disciple of the animals rights movement”. Bonner seems to be believe that Packham is abusing his position as a BBC presenter, using the power of the BBC to spread this extreme agenda of animals rights.

Why so? Because Packham had the temerity to write an article in BBC Wildlife Magazine, in which he lambasted the National Trust, RSPB and Wildlife Trusts for failing to condemn the badger cull, grouse shooting and fox hunting.

The fact that the Countryside Alliance have felt the need to come to the aid of conservation NGOs being criticised for not taking a strong enough stand against hunting is bizarre enough in itself. And whether or not you agree with Packham is academic.

The BBC is supposed to be impartial – to provide the opportunity for people with a wide range of views to put those views into the public domain, to foster intelligent debate about issues that people find important. I expect hunting continues to fall into this category.

It seems to me that the Countryside Alliance is now advocating exactly the thing which it lobbied to oppose the Government doing as part of the Lobbying Act – which is to create a “chilling effect” on public debate.

“We are lucky [to] live in a liberal democracy where people are able to hold any number of bizarre views. There is no issue with people voicing such opinions, but using the position granted by a public service broadcaster to promote an extreme agenda is a different thing entirely.”

Surely the point of an impartial public service broadcaster is to enable people to voice different opinions. But I think Bonner is using the word “extreme” to suggest that Packham’s opinions are beyond what is acceptable – drawing parallels with the likes of extremists such as radical Islamic preachers. The Home Office is apparently drawing up a list of Extreme individuals and organisations – will Bonner be writing to them recommending Packham’s name go on the list?

Now Bonner and the CA may feel offended by Packham’s remarks – although to be honest calling hunters “the nasty brigade” is pretty tame by the standards of modern debate – and I have seen some very heavy duty trolling on twitter by both pro-hunters/right-libertarians; and animal-rights advocates. But, there is no right not to be offended.

I have quoted this several times to people on twitter in the last few days, as Salman Rushdie said:

“Nobody has the right to not be offended. That right doesn’t exist in any declaration I have ever read. If you are offended it is your problem, and frankly lots of things offend lots of people.

I can walk into a bookshop and point out a number of books that I find very unattractive in what they say. But it doesn’t occur to me to burn the bookshop down. If you don’t like a book, read another book. If you start reading a book and you decide you don’t like it, nobody is telling you to finish it.

To read a 600-page novel and then say that it has deeply offended you: well, you have done a lot of work to be offended.”

UK conservation professional, writing about nature, politics, life. All views are my own and not my employers. I don't write on behalf of anybody else.
View all posts by Miles King →
This entry was posted in Charities campaigning, freedom of speech, hunting, lobbying and tagged BBC, Chris Packham, Countryside Alliance, Free Speech, Freedom of Speech, Hunting. Bookmark the permalink.