Defra budget takes another hit; farmers worried they may have to pay for the Badger Cull

Defra received a further cut to its budget last week, shaving another £83M off. This is on top of the already planned £200M cut to take place this financial year.

The Defra budget has declined by around 25% since 2010, according to ENDS report. The National Audit Office recorded Defra’s shrinking budget in a report last year. This graphic is taken from that report. 2015-16 revenue spending had been planned at £1.76Bn before the latest cut brought it down to £1.68Bn, compared with £2.46Bn in 2009-2010. I make that a 32% cut in revenue budget. 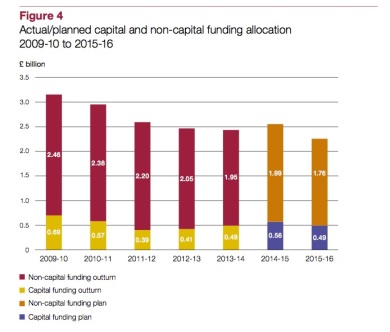 Defra seemed to have lost sight of how much they had underspent on their budget in 2013-14, something the EFRA committee chided them for, in their annual report.

Natural England and the Environment Agency can expect to take another cut to their already emaciated budgets. I heard this weekend that National Nature Reserve Managers cannot afford to have their equipment serviced as there is no budget. This is the sort of false economy that starts to operate in desperate times, as the cost of replacing equipment that breaks because it has not been serviced, will be many times more expensive. Or just won’t happen.

The Farming and Landowning Industry has already set out its stall. Quoted in Farmers Weekly, ” CLA president Henry Robinson said: “Defra is an important department that does crucial work to create a regulatory framework that is a vital factor in how rural businesses make decisions.

“It also plays an essential role in administering support payments. We will work closely with officials to help them understand how they can achieve their objectives.”

“Mr Raymond pointed out the latest cuts came on top of recent heavy reductions from a budget ‘where there are so many demands’.

He said: “The Department is already under-resourced and we are obviously concerned when you see a reduction of £80 million out of a budget of just £2.3bn.”

“It is a fair chunk on money and any reduction is a worry as we don’t know where the axe is going to fall.

“The big concern, with so many demands on Defra, we could end up with more demands for cost recovery for animal health. At a time when the industry is suffering very badly on output values, that would be difficult.”

Defra’s animal health budget, in particular is under immense strain and the Department and the Animal Health and Welfare Board for England has been looking for a while at areas where costs could be passed onto farmers, particularly in bovine TB policy, which eats up a huge chunk of the budget.

Mr Raymond cited TB testing as an example of where the Government might look to recover costs.

“We know the cost of bovine TB is increasing and until the Government delivers the strategy in full to help get the disease under control, it is not going to fall.””

So Farmers are worried they might have to stump up more money to pay for TB controls, perhaps even having to take on all the costs of continuing the badger cull.

You’d think on that basis they would welcome news from the National Trust that they had completed a four year trial of badger vaccination across a large Estate in East Devon. The Trust has managed to get costs for vaccinating badgers against TB down to £242 per animal. This compares quite well with the costs of killing badgers which have come in at between £3ooo and £5000 per animal. NFU’s actual response was this, from Deputy President Minette Batters:

“But we must remember that vaccination will not cure a sick badger and in areas where bTB is endemic up to one in three badgers could have the disease.

This particular National Trust programme was carried out in an area where TB is endemic and therefore is unlikely to have had any impact on controlling disease – indeed some farms in the area came down with bTB during this badger vaccination trial.”

I expect Edward Jenner received the same kind of response when he invented vaccination in 1796. Vaccination is itself named after the Cow because it was cowpox which was used to vaccinate against smallpox. Ms Batters seems to struggle with the concept of vaccination being a preventative measure, and not intended to cure sick animals. As for TB being endemic to an area, it is only endemic when animals in that area are infected. It can survive in the soil, only for months. Once all the animals in an area are disease-free, the area is disease-free.

It seems, regardless of increasingly savage cuts to DEFRA budgets, NFU would rather spend thousands per badger killing the animals, than hundreds per badger on disease eradication. Perhaps when they are expected to meet the full costs of the cull themselves, farmers may decide to ignore their union and proceed with vaccination programmes.

UK conservation professional, writing about nature, politics, life. All views are my own and not my employers. I don't write on behalf of anybody else.
View all posts by Miles King →
This entry was posted in badgers, Defra, NFU and tagged badgers, budget, Defra, NFU. Bookmark the permalink.

4 Responses to Defra budget takes another hit; farmers worried they may have to pay for the Badger Cull