Verging on the Spectacular

Roads and wildlife have a complex relationship. Roads can still cause damage and destruction to wildlife and nature. But roads and other infrastructure can also create the opportunity to let nature thrive.

Just down the road from us is the Weymouth Relief Road. The road cut through the South Dorset Ridgeway, which is made of chalk. The normal approach to dealing with a large cutting would have been to sow it with a mix of amenity grasses and mow it, or plant it with trees. Trees and roads can be problematical though, as once they get big enough, there is a real risk they will fall down or lose branches, causing accidents. Grass it often is then, regularly mown to keep it tidy, leaving few opportunities for nature.

Thankfully here in Dorset we have some enlightened people like Dr Phil Sterling at Dorset County Council, until recently the County Ecologist. He suggested sowing the bare chalk with wildflower seed collected from local limestone grassland sites. He had to mount a very strong case to change the way things were done, but one argument was that a great deal of money would be saved because the area would not need to be regularly mown, not having any grass in it. He won the day and the cutting was sown with plants that love bare chalk, such as Kidney vetch, Horseshoe vetch and Bird’s-foot trefoil, as well as other flowers like Ox-eye daisy. These just happen to be the food plants for a variety of threatened butterflies, including the Small Adonis and Chalkhill Blues. All these flowers also provide hectares of nectar for other invertebrates, including, of course, Bees.

Fast forward a few years and this is what it looks like:

A spectacular array of Kidney vetch on the Weymouth Relief Road cutting I wonder how many people driving to and from Weymouth every day wonder what all these yellow flowers are.

Only a few miles away on a much smaller road I came across a tiny triangular meadow, little more than a glorified road verge. We had noticed it on the weekend when heading past for a walk along the edge of the Fleet. I went back to have a better look and it was a gem. There were hundreds of Green-winged orchids, among an exceptionally rich limestone grassland, with masses of Rough hawkbit, Ladies-bedstraw, Ox-eye daisy, Bird’s-foot trefoil and so on. 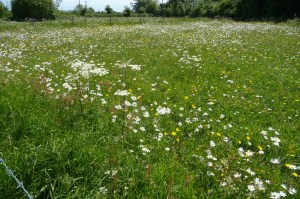 a tiny meadow full of wildflowers

This meadow must be old, for all those flowers to have survived there. Most of the Orchis morio had gone over, but there were still a few in good shape.

a group of green-winged orchids

I was surprised that the meadow didn’t show up as an area of priority grassland habitat on MAGIC, given how obvious it was right next to the road. I will check with the Wildlife Trust to see if they know about it.

I wonder if the people of the village treasure this gem of a mini meadow, when they post their letters in the letterbox next to it. I imagine they do.

Last stop was to check whether I really had seen a lone Greater butterfly orchid on a road verge half a mile away from the meadow. It was quite late on sunday evening after our walk along the Fleet and I had started to doubt my botanical skills. I found a convenient place to park and wandered back along the road to the junction where I thought I had seen it. The road must follow a limestone ridge, and on the north side, the closely grazed fields below were carpeted with wild flowers, while the horse who was evidently the grazier, was happy in its stalls. The road verge I was looking for was on quite a busy road (the inland coast road from Weymouth to Bridport) and I imagine there were a fair few peole driving past wondering what on earth this bloke was doing standing on the verge staring at the ground taking photos.

a road verge on the busy Weymouth to Bridport road

I was delighted to discover that it was indeed a lone Greater butterfly orchid, more or less at peak flowering.

What I was surprised to discover was that this orchid had the remains of a cage still protruding from the soil next to the plant. Someone had very caringly tried to protect the orchid from damage by creating a wire “hat” to stop it from being damaged. But the hat/cage had disintegrated leaving a few random strands of green plastic-covered wire sticking out the ground. The orchid had carried on regardless.

This tiny verge formed a triangle where the village road joined the main road at an acute angle – the butterfly orchid was down in one corner, next to a little bank covered in Horseshoe vetch. I’m not sure what had happened, but the main part of the triangle had been laid bare for some reason and there were large tractor marks running across it, which you can just see in this photo.

But although there was bare ground and it looked a bit messy, the plants were recolonising and a Wall butterfly was finding something to eat from the bare earth, perhaps licking salt.

Road verges, new and old, are refuges for nature. They don’t get much management and they don’t need much management. They are full of surprises if you’re prepared to stop and look.

UK conservation professional, writing about nature, politics, life. All views are my own and not my employers. I don't write on behalf of anybody else.
View all posts by Miles King →
This entry was posted in road verges and tagged Orchids, Road Verges, Weymouth Relief Road. Bookmark the permalink.

26 Responses to Verging on the Spectacular