An outbreak of nonaerophobia among UKIP spokesmen 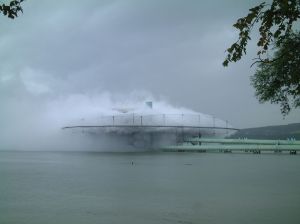 What is it about UKIP Spokesmen and their fear of gases disappearing?

First there was farm spokesman and chicken farmer Stuart Agnew, telling the European Parliament of his desperate worries that the EU’s action on climate change will lead to all the Carbon Dioxide being sucked out of the air, preventing plants from growing.

Now their housing (and Environment) leader Andrew Charalambous invites us, on his fascinating blog, to ask “when our countryside and forests are radically diminished where will we get our oxygen to breathe from?”. A question indeed.

I wonder if this is a subtle new election tactic, to ignite the electorate’s own smouldering fears of the loss of gases – a latent nonaerophobia just waiting to break forth into mass hysteria, resulting in a late swing to UKIP in the polls – it will go down in political history as “The Great Gas Swing”.

Will we hear climate change and energy spokesman Roger Helmer decry moves towards a Hydrogen Economy, as he reveals his fears that all the hydrogen will float away into space, before it can be used? Perhaps someone could attach some large hydrogen filled balloons to Mr Helmer, to see whether it does.

Could we even see the Great Leader Nigel Farage raising the prospect (in a very high voice) of Helium disappearing from the planet?

No-one in UKIP has directly stated who they believe is responsible for these gases disappearing, but one can make some educated guesses. It must be migrants, coming here, breathing in too deeply (and holding their breath).

Or worse, evil foreign super criminals must have secret gas-extracting machines they have smuggled into the country and are at this moment, quietly pumping all our gases away. I can feel my throat tightening as I struggle for breath…..

UK conservation professional, writing about nature, politics, life. All views are my own and not my employers. I don't write on behalf of anybody else.
View all posts by Miles King →
This entry was posted in UKIP and tagged gases, UKIP. Bookmark the permalink.

5 Responses to An outbreak of nonaerophobia among UKIP spokesmen