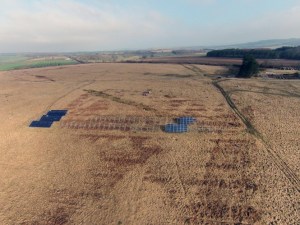 Thomas Hardy knew about the meaning of Brown in Dorset landscapes. The Return of the Native starts

“A Saturday afternoon in November was approaching the time of twilight, and the vast tract of unenclosed wild known as Egdon Heath embrowned itself moment by moment. Overhead the hollow stretch of whitish cloud shutting out the sky was as a tent which had the whole heath for its floor.”

This was of course parodied to perfection by Monty Python in their novel-writing from Dorchester sketch, possibly the only time our little town was mentioned by the pythonists.

Community Heat and Power (or is it British Solar Renewables?) have kindly published this recent aerial photo of Rampisham Down.

It shows two things very clearly. One is that Rampisham Down is entirely covered by unimproved grassland. The “brown” colour is not related to it being a “brownfield site” despite Local District Councillor Tony Frost’s witty suggestion that it is. It looks brown because the acid grassland plants that grow there have grown ungrazed for a few years (the years during which it has been owned by British Solar Renewables). When grasses and herbs in a wildlife-rich grassland grow without grazing, they flower and then the leaves die back to a brown colour. A grazed grassland would still retain some shades of brown, unless it was so heavily grazed that all the leaves and flower stalks are grazed off.

Note in this photo how green are the fields adjacent to Rampisham Down, again taken by drone for BSR.

Unimproved grasslands are much richer in wildlife and archaeology, as well as locking up twice as much Carbon in their soils, helping to clean pollutants from drinking water, and providing homes for pollinators such as Bumble Bees, as well as providing many other benefits to people. More information on the value of Unimproved Grasslands can be found in this report.

The second point is that the drone photo shows clearly that Rampisham Down is not a Brownfield Site. Brownfield, also known as Previously Developed Land is defined by the NPPF as:

Land which is or was occupied by a permanent  structure, including the curtilage of the developed land (although it should not be assumed that the whole of the curtilage should be developed) and any associated fixed surface infrastructure. This excludes: land that is or has been occupied by agricultural or forestry buildings; land that has been developed for minerals extraction or waste disposal by landfill purposes where provision for restoration
has been made through development control procedures; land in built-up areas such as private residential gardens, parks, recreation grounds and allotments; and land that was previously-developed but where the remains of the permanent structure or fixed surface structure have blended into the landscape in the process of time.

While the buildings at Rampisham are clearly developed, they only take up a tiny proportion of the whole site (and are excluded from the SSSI). The other permanent structures include the concrete platforms for the masts. These are each roughly 10x10m, so for 35 masts the total area is 0.35ha. The ducting which used to take electricity to the masts also occupies perhaps 1 hectare in total. 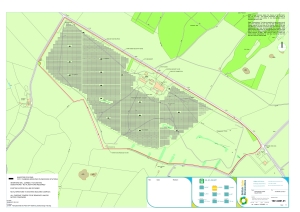 Now take a look at what BSR intend to do at Rampisham, and compare this with their photo showing their “test solar panel arrays”. The whole area of Rampisham covered by that photo will be covered in solar arrays.

If they get away with it, at that point Rampisham will certainly be transformed into an Industrial Brownfield Site.

UK conservation professional, writing about nature, politics, life. All views are my own and not my employers. I don't write on behalf of anybody else.
View all posts by Miles King →
This entry was posted in Uncategorized. Bookmark the permalink.