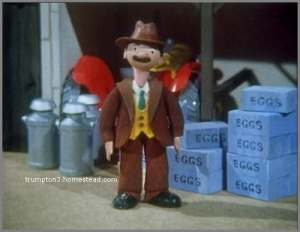 UKIP’s agriculture spokesman (John) Stuart Agnew may know nothing about chemistry, but he knows how to raise chickens. Agnew has a farm in Norfolk, where he has a 35000-chicken free range egg farm. Agnew also receives EU farm subsidies on his Norfolk acres, both Single Payment and Entry Level Scheme.

Agnew’s Fincham Farm (or is it Paxfield Farm?) received around €100,000 of single payment in 2007, that equates to a sizeable 500ha farm – rather more than the 400 acres suggested in the Harrogate Informer. Agnew also receives ELS on 175ha which adds up to around £5250 a year. Mr Agnew is former chairman of Norfolk NFU.

Agnew is also grandson of Sir John Stuart Agnew, 3rd Baronet Agnew. Cousins in the direct line of ascendance own the Rougham Estate in Suffolk.  Agnew’s cousins appear to be considerably more enlightened than him.

Although Agnew clearly feels that the EU has been a disaster for Britain, he has done remarkably well out of it personally. But if UKIP win, he will be alright, because, as UKIP farm spokesman, he has already committed UKIP to carry on subsidising farmers (for doing nothing other than owning land), up to around £120,000  a year. That’s handy. UKIP would also remove livestock (eg Chicken) units from Integrated Pollution Prevention Control (IPPC) regulations.  Handy too.

Mr Agnew is pro-GM and uses GM-feed for his chickens. He thinks introducing GM-sugar beet means “wild beet will be history“. This is the first time I’ve heard any politician advocate exterminating a wild native plant from Britain. But then this is Norfolk, where growing Sugar Beet is very big business.

Agnew has done well enough from his farm subsidies to be able to afford to fly business class to India to have a hip operation done privately out there, because the NHS had a “laid back attitude towards arthritis.” I’m glad our taxpayers money subsidising farmers like Agnew has been spent so well, but I’m not sure how well this fits in with UKIP’s policy on the NHS hiring doctors “who don’t speak very good English“.

Agnew will be much less happy about what’s happening on his neighbour’s land. His neighbour used to be the RAF at RAF West Raynham. The RAF closed the airfield and it was sold off years ago. It’s now fallen into the hands of the dreaded Solar Farmers. Good Energy has won planning permission to build one of the largest Solar Farms in Britain – a massive 49 MW  array, all over the land neighbouring Mr Agnew’s farm, where his chickens lay their eggs.

Imagine someone who is so incensed at the idea of action against climate change that they think it will stop plants growing, waking up every morning and being greeted with the sight of hundreds of acres of shining solar panels; silently, malevolently, mercilessly sucking precious life-giving gases out of the atmosphere. UK conservation professional, writing about nature, politics, life. All views are my own and not my employers. I don't write on behalf of anybody else.
View all posts by Miles King →
This entry was posted in agriculture, climate change, Common Agricultural Policy, Solar Farms, UKIP, Uncategorized and tagged CAP, Farm policy, Solar Farms, Stuart Agnew, UKIP. Bookmark the permalink.