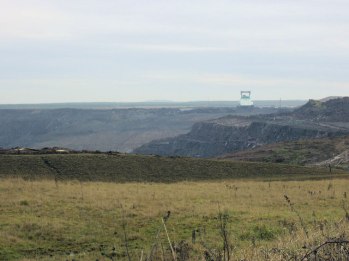 I have written many times (eg here, here and here) about Viscount Matt Ridley. Ridley styles himself as “The Rational Optimist”, is brother in law of former Secretary of State against the Environment Owen Paterson, and was chair of the Northern Rock bank, when it collapsed in 2007 and was bought by the taxpayer for £3Bn. In addition to that cost, the UK taxpayer, through UK Asset Resolution, still owns many billions of pounds of Northern Rock mortgages, which may still have to be written off. Remember that when you hear this Government complain that it was the last lot who “got us into the financial crisis”.

I knew Ridley was a major landowner in Northumberland and derived an income from coal mining. But I only now realise just how major and just how large an income. Ridley owns the Blagdon Estate in Northumberland, just north of Newcastle. It’s clearly a very large estate, though Ridley is coy about exactly how many thousands of acres he owns.

Blagdon Farming Limited received in Single Farm Payment £196k in 2013, which would equate to around 1000ha of eligible farmland. In addition they also received £41000 from Rural Development grants.

This very friendly piece in his local paper tells us that the Blagdon estate covers over 12 square miles. This means Ridley owns over 3100ha or nearly 7500 acres. As you can see from the Blagdon website, Ridley has also diversified his estate so he also receives income from businesses using buildings on the estate, as well as his many tenants.

While the income from CAP payments and tenants may appear to be quite a lot, it is a mere drop in the ocean compared to his main income stream, coal.

The Government estimated that the UK as a whole emitted 570 million tonnes of CO2 (including equivalents from other greenhouse gases such as methane and nitrous oxide) in 2013. So Ridley’s open cast mines once they are worked, will contribute the equivalent of 5% of the UK’s entire greenhouse gas emissions last year. As they are being worked over a five year period, we can roughly estimate that Ridley is responsible for 1% of the UK’s climate impact per annum.

Now of course Ridley is not himself using all the electricity produced from his coal – it is being used to provide energy for domestic business and industrial uses, including providing energy to our homes, so in that respect we must all take a burden of the responsibility for the CO2 his land is emitting.

And he might argue that if his land did not produce the coal, it would be imported from elsewhere in the world, or it might be replaced by coal with a lower energy density. Ridley also argues that as an advocate for gas, he is arguing against his own income stream. This is what he says on his website

“I have a financial interest in coal mining on my family’s land. The details are commercially confidential, but I have always been careful to disclose that I have this interest in my writing when it is relevant; I am proud that the coal mining on my land contributes to the local and national economy; and that my income from coal is not subsidized and not a drain on the economy through raising energy prices. I deliberately do not argue directly for the interests of the modern coal industry and I consistently champion the development of gas reserves, which is a far bigger threat to the coal-mining industry than renewable energy can ever be. So I consistently argue against my own financial interest.”

This is typical Ridley stuff and contains from dubious claims.

The UK Fossil fuel industry, according to the radical anticapitalists at the OECD, received £4.3Bn subsidy in 2011, including £85M for coal. As Ridley mines 1/6 of the UK’s coal, it is reasonable to assume that he received a sixth or £14M of coal subsidy from the UK taxpayer. In practice it may be smaller than this, as it will be shared out along the entire production chain from mine-owner to electricity producer, but it will still be a tidy sum – considering he is producing the most polluting fuel of them all and we are committed to reducing our greenhouse gas emissions by 80%.

As for his championing the development of gas reserves, he conveniently forgets to mention that one of the biggest gas reserves is sitting in unworked coal seams – and projects are already underway to extract gas from coal without removing it from the ground.

“It’s the fashion these days to vilify coal as the root of all environmental evil, but I think that’s mistaken. Coal and the technologies it spawned made it possible to double human lifespan, end famine, provide electric light and spare forests for nature. Because we get coal out of the ground, we do not have to cut down forests; because we use petroleum we don’t have to kill whales for their oil; because we use gas to make fertilizer we don’t have to cultivate so much land to feed the world. This country can compete with China on the basis of either cheap labour or cheap energy. I know which I’d prefer.”

If that isn’t an argument in favour of the modern coal industry I’d like to know what it is.

It is not really that surprising that Ridley leads the way in climate denial in the UK: as a scientist (not a climate scientist but a biologist) he lends credibility to the likes of Lord Lawson (who was disastrous as a Chancellor), or the claque of climate denying journalists that include the likes of James Delingpole, Christopher Booker and Charles Moore.  It is also worth noting that Ridley is profitting from the demise of the deep mine coal industry – an industry that was destroyed following a plan, The Ridley Plan, devised by his uncle – the Environment Secretary Nick Ridley.

As the modern day King Coal, one might suggest Matt Ridley has an extremely large vested interest in stoking climate denial.

Thanks to DesmogUK for starting me on this particular trail

UK conservation professional, writing about nature, politics, life. All views are my own and not my employers. I don't write on behalf of anybody else.
View all posts by Miles King →
This entry was posted in climate change, Denialists, Matt Ridley, Uncategorized and tagged climate change, coal, Matt Ridley, Owen Paterson. Bookmark the permalink.