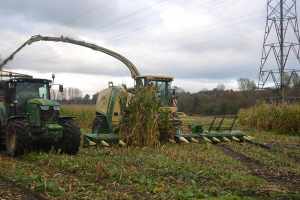 I was drawn back into the muddy world of Biofuel Maize by reading an article in the Western Morning News entitled planting right variety of maize boosts AD Output.

The piece was a bit of puff for the AD industry, and while packed with statistics, the one piece of information I was looking for was missing. And it was this – how much methane does a hectare of biogas maize produce? It’s not a difficult question, but one that I had to do a fair bit of delving to find out.

Now on the plus side, Maize absorbs CO2 as it grows. Again it’s a difficult figure to track down but from what I have read it appears that a tonne of live (wet) maize absorbs half a tonne of CO2; and biogas Maize produces between 30 and 5o Tonnes of fresh Maize per Hectare, giving 9-15 Tonnes of Dry Matter  per hectare. So for every hectare of biogas Maize produces, there is a saving of between 15 and 25 Tonnes of CO2, or between 4 and 7 Tonnes of Carbon.

You may be surprised to know that cultivating a field has a cost of 150kg CO2equivalent per hectare, but this is relatively small compared to the other big cost. The other big cost associated with biogas maize (as a very low density product) is transport, from the field to the clamp (where it has to dry) then from the clamp to the AD plant.

A tractor towing a trailer over public roads has a high carbon footprint. I have calculated that it could be 1.5kg CO2 per kilometre towing 15 tonnes of DM maize, ie 100g CO2 per tonne per kilometre. If the total journey from field to AD via the farm (plus the return journey) was 50km that would add 50kg CO2 per Tonne and up to 750kg CO2 per hectare.

At this point the cost is up to 3.75 tonnes of CO2 per hectare. If you added in all the little carbon footprints of other things that are part of the process of producing AD Maize (eg transporting the seed, the surprisingly large footprint of pesticides and herbicides, including the fuel used to deliver them to the farm, then spray them on the fields) I think we could easily see that “cost” figure head towards 4 tonnes CO2e per hectare.

When I was at the Grasslands Trust I was very keen to promote an unrealised value of species-rich grasslands: they are very good Carbon sinks. The general figures bandied around for Carbon sequestration when converting arable land (a Maize field) to grassland was around a Tonne of Carbon per hectare per annum. That is, left to its own devices, with a bit of light grazing, an arable field on its own will absorb a tonne of Carbon per hectare, as it naturally develops into grassland. But some research has indicated that far higher rates of sequestration can be achieved. One particular experiment found rates as high as 3 Tonnes of Carbon per hectare absorbed. And Species-rich grassland have around twice as much Carbon in their soils as arable fields do. So a grassland will continue to absorb Carbon for decades after it has reverted from arable.

In other words, some biogas Maize production is no more efficient at reducing Greenhouse Gas emissions than letting an arable field revert to species-rich grassland. And the more intensive the production, the more the cost increases – at 500kg of fertiliser per hectare that carbon footprint shoots up to 6 tonnes of CO2 per hectare.

And that’s not even taking into account the external environmental costs of  Maize production, which I have written about before. Maize is simply the most environmentally damaging crop grown in Britain and possibly in Europe. And while farmers and AD plant owners may are generating a healthy return on their investments, not only are we paying them through the subsidy, but we are also paying through damage to watercourses, increased flooding, contamination of drinking water supplies and the continuing loss of wildlife from the countryside.

It’s another example of how serious can be the unintended consequences of subsidies for supposedly good causes. In this case, the Feed in Tariff for biogas is so generous and has so few restrictions on it, that AD plants are paying as much as £500 a hectare to farmers to produce biogas Maize. No wonder the area of farmland under AD Maize is growing exponentially.