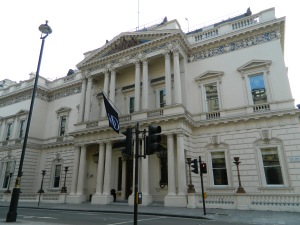 Bastions of Power: The Institute of Directors

The problem with the internet is that it is easy to make connections between people, events and organisations: you could call it a conspiracy theory generator. It is far harder to elucidate the relationship between them though – it’s the old problem of correlation and causation. Nevertheless here are some connections.

Cast your minds back, if you are old enough, to the heady days of the mid-70s. James Burke had an excellent programme called “connections” in which he showed how the invention of the paper clip led inexorably to the discovery of black holes. It wasn’t quite that silly but it was great fun for a 14 year old whose mind was filled with possibilities.

In 1975, Margaret Thatcher swept to power as the first Female leader of the Tory party. She plotted and watched as the Wilson then Callaghan Labour Governments, gradually crumbled, partly under sustained attack from some unlikely sources.  Earlier, the UK had entered the Common Market under the hapless Ted Heath, who had lost to the unions in the strikes of 1973.  Harold Wilson won the 2nd general election of 1974.

Heath was pro Europe and wanted the UK to reap the benefits of trading freely with our European partners. But this was seen as treachery, even treason by the hard right of the Tory Party. They opposed the UK joining the Common Market; were against immigration from the Commonwealth; tacitly or explicitly supported racist/fascist regimes in Europe, Latin America and especially in Africa (Ian Smith’s Rhodesia and the White Supremacists of South Africa), and promoted a policy of forced repatriation of (black) immigrants. And they had a club, called The Monday Club.

The Monday Club had been founded as a reaction against what they saw as the creeping liberalism of the Harold Macmillan Government of the early 60s. Founders included senior Tory politicians and activists, many from the Intelligence Services, especially the Secret Intelligence Service, MI6. Prominent among these were George Kennedy Young, who had been Deputy Director of MI6; and Tory MP Julian Amery, who had also been in SOE and MI6. Both shared an obsessive hatred of communism and feared communist infiltration of British society, particularly through the Unions, civil society (eg CND) and the Labour Party. Amery’s brother John had been a notable Fascist who had worked for the Nazi regime and was hanged as a traitor after the war.

After Thatcher took over in 1975, the Monday Club became very influential and this influence continued through into the early 80s. Monday Club members espoused support for the Atlantic partnership of the UK, the US and others, fighting a global war on communism, the Cold War. They were naturally sceptical of the European project, seeing it either as threatening the Special Relationship, or worse, as a Communist plot.

The Monday Club also espoused the economics of Friedman and Hayek; the pure truth of the market, or free market fundamentalism as it has also been described.  Natural allies in this belief were the Institute for Economic Affairs (IEA), the most influential Thinktank of the Thatcher years. The IEA advocated free market fundamentalism and wholesale privatisation. Lord Harris of High Cross founded the IEA, and went on to become chair, then President of the pro-smoking astroturf body FOREST. The IEA took substantial funding from the Tobacco Industry, and well may continue to do so. IEA also advocates against climate action, and receives funding from the Fossil Fuel industry.

The Institute of Directors represents directors of businesses small and large, and advocates the needs of businesses to Government. It is a lobbying organisation as well as a sort of Trade Union: a bit like the NFU.

Back then the IoD, the IEA and the Monday Club worked closely together, influencing, developing, shaping the Thatcher project. Nor was the IoD divorced from the intelligence community. Former Director of Admin at MI6 Jimmy Jones, went straight from MI6 to the IoD in 1975, before continuing on to the Confederation of British Industry, as deputy Director General.

Graham Mather was a member of the Monday Club, organising their universities committee. During the 70s, the Anglican church community were campaigning to have sanctions imposed on South Africa. According to this account, in 1980 Mather acted on behalf of a group, which later turned out to have links to the South African Intelligence Servce BOSS, who were trying to buy a christian newspaper Christian World, and turn it into a propaganda tool for the South African state. Mather had also complained that Christian Aid were carrying out political activity by campaigning against the South African Regime and called upon The Freedom Association (of which he was a member) to be vigilant in watching these organisations who purported to be charities but were actually engaged in political activity. The Freedom Association was set up by far right protestant twins the McWhirter Brothers, of Guinness Book of Records fame. Another founder was the far-right Uber Cold Warrior Brian Crozier.

Crozier ran anti-communist black propaganda operations in Britain. Crozier and another Monday Club Tory Stephen Hastings, tried to persuade Thatcher to create an anti-communist counter subversion executive to counter the communist threat within. She was interested, but it didnt happen.

Mather  joined the IoD in 1980 and went on to become Head of Policy. In 1987 he joined the IEA as Deputy Director, then General Director. He left in 1992, following the fall-out from the ousting of Thatcher in late 1990. The Charities Commission investigated the IEA while Mather was in charge, as they were concerned it was carrying out political activity under a charitable guise.

Since then he has been an MEP and created the influential European Policy Forum, which advocates de-regulation in the UK and Europe. According to this site, ” his principle interest is ‘the advance of markets into government itself.’ Mather sees himself as part of a ‘priesthood of believers in the market’, pushing a libertarian right ideology against the ‘threat … from socialism’.”

At the same time the head of PR at the IoD was David Burnside. Burnside, from the Protestant community in Northern Ireland, had cut his PR teeth in the violent early 70s,  as press officer for the Vanguard Unionist progressive party. Burnside’s PR skills took him to the IoD from 1979-1984, and then onto British Airways where he was embroiled in the dirty tricks war between Virgin and BA. Burnside set up his own very successful PR company, became an MP and now advises Russian Oligarchs. Burnside is also, apparently a member of a very shadowy right-wing group called Le Cercle, which was set up by the French after the second world war to counter communism and promote Atlanticism ie the need for Europe and America to counter the Communist Threat. Julian Amery was chair of Le Cercle, and it was he who brought Jonathan Aitken onto Le Cercle as chair, only for him to be removed, on his conviction for perjury.

Our third character from the IoD needs little introduction – Neil Hamilton. Hamilton was a high flying Tory student activist, vice chair of the notorious Federation of Conservative Students, with their “hang Nelson Mandela” badges, who joined the Monday Club early on in his political career. He also worked as European and Parliamentary Affairs Director at the IoD between 1979-83.

Hamilton had been accused by a BBC Panorama programme, of making a Nazi salute while in Berlin, a criminal offence in Germany. Hamilton, a lawyer, sued for libel and before the case had even got to court, the BBC caved in and paid out £20,000. An internal BBC memo stated that 17 witnesses had been intimidated into changing their testimony. Hamilton had also courted controversy when involved with the Western Goals Institute who had invited neo-fascists Jean Marie Le Pen and Alessandro Mussolini, to speak at the 1992 Tory party Conference. The WGI’s hon. President in 1992, South African MP Clive Derby-Lewis, is now serving life for conspiracy to murder South African Communist Party Leader Chris Hani. When Hamilton was fighting the Al Fayed libel case, his chief fundraiser was Lord Harris of High Cross, who wrote this glowing reference for him. He had clearly failed to impress David Burnside during his time at the IoD, as this story shows.

What seems clear to me is that, in this period of the late 70s to early 80s, The Monday Club, the IEA and the IoD were at the very heart of the Thatcher project, to introduce free market fundamentalism and indeed a libertarian-right approach to Government. The involvement of MI6 and Le Cercle in promoting Atlanticism as a bulwark against perceived socialism and communism  seems pretty clear too. What of it? Isn’t all this ancient history?

Well, not necessarily. Because there is one character I have not yet introduced. The son of a solicitor, and grandson of a decorated Naval Captain, he went to Salisbury Cathedral School as a chorister, before continuing his education at a private school in North Devon. After a stint working on sheep farms in New Zealand, he went to Bristol Poly where he did an HND in Business Studies. Already interested in politics, he was President of the Student Union in 1978. He went to London, where he became Press Officer at the Institute of Directors. Here he worked learnt the PR ropes with David Burnside; and met Graham Mather, Neil Hamilton, and no doubt many other influencers. After working at the IoD during this amazing time of influence, he joined Holmes and Marchant and became a Director there.

Crowther left Holmes and Marchant in 2000 to set up his PR company, April Six. Holmes and Marchant were taken over in 2000 by Huntsworth, created by Lord Chadlington, brother of John Selwyn Gummer, now Lord Deben.  Chadlington is also David Cameron’s constituency chairman. Huntsworth are at the forefront of the PR supporting health service privatisation. Chadlington also chairs Atlantic Partnership,  yet another Atlanticist group. AP has some very influential people on its board.

So I have found some connections. I don’t see the whole picture of course. And I don’t necessarily believe that all this proves the existence of the Synarchie. Because that ultimately takes you to dark paranoid world of David Icke and the Lizard Men.

What does seem to be clear though is that Steve Crowther, chair of UKIP, and Neil Hamilton, vice chair of UKIP, go back a long way. Back to the heady days when the Monday Club, the IEA and the IoD ran the roost; and pushed a philosophy of free market fundamentalism, coupled with a hard-right doctrine right into the heart of the Tory Government of the day.

Let’s not pretend UKIP will be any different.

Photo by Freepenguin (Own work) [CC-BY-SA-3.0 (http://creativecommons.org/licenses/by-sa/3.0) or GFDL (http://www.gnu.org/copyleft/fdl.html)%5D, via Wikimedia Commons

UK conservation professional, writing about nature, politics, life. All views are my own and not my employers. I don't write on behalf of anybody else.
View all posts by Miles King →
This entry was posted in Charities campaigning, corporate lobbying, deregulation, neoliberalism, the far right, Think Tanks, Tory Party, UKIP, Uncategorized and tagged far right, IEA, IoD, Monday Club, Steve Crowther, think tanks, UKIP. Bookmark the permalink.