Last week David Cameron told the Tory Conference that under the Coalition the country was “paying down its debt.” This, after all, we are told is the reason why we have had to endure:

Privatisations such as The Royal Mail, large parts of the NHS, and selling off publicly owned land for private profit 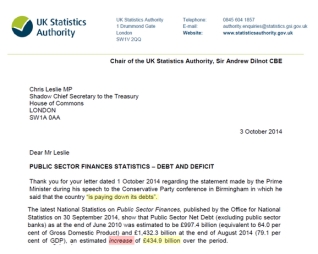 The Public Sector Net Debt increased by nearly 50% during this Parliament!

So if all these cuts and privatisations are not about reducing the public debt, then what are they about?

George Osborne made it very clear last week at a Question and Answer session at the Institute of Directors, when he made a brazen attack on Charities who he cast as “anti-business”and urged business leaders to  help him “win this argument for an enterprising, business, low-tax economy that delivers prosperity for the people and generations to come.”

Osborne, the son of a Baronet and personally worth well over £4 Million , is not in the slightest bit interest in delivering prosperity for “the people”, unless they are his “people”. The disparity between the richest and poorest has grown under this Government to its largest since the Second World War. The top 10% in the UK own nearly half all of its private wealth, while the top 1% own as much as the poorest 55% and are getting wealthier at an increasing rate.

Is there any real surprise then, that with politicians like this, voters are voting against politics by supporting populists like UKIP.

UK conservation professional, writing about nature, politics, life. All views are my own and not my employers. I don't write on behalf of anybody else.
View all posts by Miles King →
This entry was posted in David Cameron, public debt, spending cuts, Tory Party, UKIP and tagged debt, public spending cuts. Bookmark the permalink.