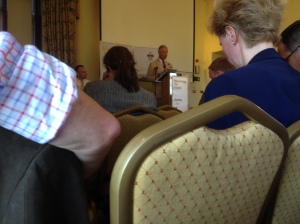 Earlier in the Summer I helped organise a conference on the plight of wildlife-rich grasslands, especially wildflower meadows. Plantlife, Rare Breeds Survival Trust and the Wildlife Trusts came together and Prince Charles gave the keynote speech, which was a heartfelt and compelling call for society to value these treasures and not lose any more.

Lord De Mauley (looking intently at the Prince in the photo above) spoke for the Government. He spoke mostly about the National Pollinator Strategy and how important it was for us all to look after the bees and other pollinators, which is absolutely right. He didnt talk much about meadows, and gave standard Government responses to questions about agri-environment schemes, regulation, greening and other topics.

I thought he handled the answers well, didn’t give anything away, but did so with the easy charm and affability of someone from the aristocracy, much like his predecessor Richard Benyon (though he is not technically an aristo). I did get the impression that De Mauley was listening to all the points being made in the discussion.

So I was pleased to see him very overtly distance himself from his former boss Owen Paterson, at the Tory Party Conference. Asked what he thought of Owen Paterson’s deranged attack on The Green Blob after his sacking, De Mauley said

“I think members of what I like to call the green lobby do us a service and they have shown us what is possible with lobbying. There are lessons some of us – on all sides – could learn lessons from that.”

This shows to me that De Mauley is a mature politician, who listens to sensible advocacy even if it does not chime with either his own personal views, or is at odds with his Defra briefings. It doesn’t mean he will necessarily do anything different as a result of course, but at least it is worth trying, whereas it was abundantly clear from his first day in office that it was pointless trying to influence Paterson, as he already knew all the answers.

UK conservation professional, writing about nature, politics, life. All views are my own and not my employers. I don't write on behalf of anybody else.
View all posts by Miles King →
This entry was posted in bees, Defra, Friends of the Earth, Lord de Mauley, meadows, Neoconoids, Owen Paterson, Prince Charles, Richard Benyon and tagged Bee, National Pollinator Strategy, Owen Paterson, Pollinators, Prince Charles. Bookmark the permalink.