A Story of dispossession and emigration: The Clearance of Bourblaige

We have recently returned from an amazing trip to Australia. It’s strange that I had to travel half way around the world to find out some things about my Scottish ancestors. On my mum’s side, although they all ended up in Australia, her four grandparents were descended from two English families (one transported to Australia for a crime he was later pardoned for, the other who went as part of a family who chose to go, when one of their cousins was transported), a Welsh family (who went of their own accord) and a Scottish family.

My Scottish ancestors were Stuarts, but not royal ones! They were crofters, eking out a  living on the Ardnamurchan peninsula overlooking the Sound of Mull in a place called Bourblaige. Bourblaige was “oppressed with too many tenants” according to an 1806 Estate survey. The owner of the Estate, James Riddell, decided in 1828 to evict the residents of Bourblaige, combine its land with other adjacent settlements and create a large, very large, sheep ranch.

Yes, this is the Highland Clearances. Reminiscences at the time attest to the brutality meted out on the hapless crofters. 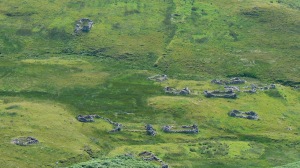 Bourblaige as it is now, deserted and ruined.

Photo by Jon Haylett, used with thanks and permission under the Creative Commons Attribution/Share Alike Licence v3.0 . From the Kilchoan Diary blog http://kilchoan.blogspot.co.uk.

This description comes from the excellent Kilchoan Diary website entry for Bourblaige:

The evictions were carried out with considerable cruelty. There is a story that one crippled old woman who barricaded herself into her cottage had her front door walled up by a stonemason, imprisoning her until she agreed to leave. Looking at the buildings, few of their drystone walls stand above a metre high, suggesting that those who carried out the evictions went to some lengths to knock them down.

I found another description of the clearance:

“To clear Bourblaig, the laird’s men ‘shot the dogs, and they shot the goats, and they drove away the cows. And Then They Took the roofs off. It Was in the wintertime That They Did it. Plows were pulled through the potato pits so That They Would spoil in the frost. And the people Walked to Swordle (on the north coast) through showers of snow. A wee girl was carrying the riddle (for separating the winnowed oats). A girl aged six weeks was carried out of Bourblaig, and it did her no harm being carried, as she bore eight children, all who reached maturity. ‘

It’s worth noting that in Clachans such as Blourblaige the farmland was farmed communally in a similar way to the mediaeval Open Field system in England. On more fertile land, fields known as Runrigs were cultivated in strips and the strips were allocated randomly each year, so one family could end up with a good strip or a less productive one. On more infertile land, small plots known as Lazybeds were cultivated. Bracken and Seaweed were both used as soil improvers and fertiliser.  For centuries barley and oats were grown in the fields, and cattle were the main livestock animal. The introduction of the potato to the Highlands in 1755 saw the population grow significantly.  Transhumance was common, with stock taken to summer grazings on high ground.

Though ownership of the Ardnamurchan estate passed through the hands of several prominent Scottish Families (Campbells and Murrays) through the centuries the way the land was utilised had not, and the Stuarts of Bourblaige quietly continued their existence, until the Riddells acquired it in the 1770s.  James Riddell Bt, was superintendent of the Society of British Fishery and a Fellow of the Society of Arts and Sciences. He was clearly an upstanding member of society and I imagine was keen to see his newly acquired estates being put to productive and profitable purposes. Riddell was obviously enthused by the new opportunities afforded by sheep ranching and this led to the crofters, effectively the same as the commoners of pre-enclosure act English parishes, being evicted.

Having been evicted from the land, the Stuarts moved to Acharacle. 10 years later, in 1839, they sailed for Port Jackson, Australia.

Is this anything other than a bit of personal family history? In a way it is just that. But it also means something very important to me personally. It is the story of  a community, living relatively lightly off the land, not taking too much, and taking little if any profit. This long established way of living is then peremptorily discarded by the wealthy landowner, keen to exercise power, implement new ideas of the economy. The new science of economics, created in large part in Scotland, encouraged landowners to take profit from the land, to work it hard and degraded it, regardless of the feelings of either the community, or the nature that lived there.

While subsistence farmers such as Crofters and Commoners may have long gone from the British Countryside, the economic arguments that lead to nature being discarded in as equally callous a manner have not.

Have we come so far, in the intervening 200 years?

UK conservation professional, writing about nature, politics, life. All views are my own and not my employers. I don't write on behalf of anybody else.
View all posts by Miles King →
This entry was posted in Australia, history, Scotland, Stuart, Uncategorized and tagged Highland Clearances, Scotland, Stuart Family. Bookmark the permalink.

3 Responses to A Story of dispossession and emigration: The Clearance of Bourblaige