No targets and prescriptions – Conservation: The Knepp Way 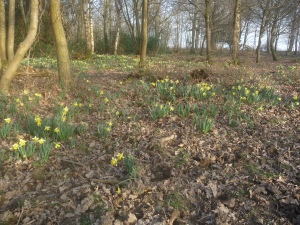 On Wednesday I was privileged to spend a day at the Knepp Estate in Sussex, with Natural England Agriculture Policy experts – not that NE do policy of course. Other experts (and friends) also attended including Sussex Wildlife Trust Chief Exec Tony Whitbread and Weald Meadow Project founder and wildflower meadow creation expert Keith Datchler.

Over the last 12 years the owner, Charlie Burrell, has converted what he had run as an intensive mostly arable estate of 3000 acres, into very low intensity naturalistic grazing land. Some might even call it re-wilding. Charlie (formally Sir Charles Burrell 10th Baronet) showed us round with great pride and ecological expertise. Fields that had been intensive arable less than 10 years ago were supporting nationally important populations of nightingale and Purple emperor. 24 species of dung beetle had appeared (from where?) thanks to large herds of Longhorn cattle, Exmoor Ponies, Fallow and Red deer and Tamworth pigs. And the other ecosystem goods that are provided by this project are likely to be highly significant whether it be carbon storage, pollinator provision, water quality and flood prevention, as well as jobs and the economy   – Knepp Ecosafaris is starting up this year.

Naturally a great deal of scrub is developing – but it was interesting how the composition varied from field to field, as did the sward. Some areas were covered in common fleabane last year – to such an extent that 50 head of cattle had to be taken off that particular area. Charlie was concerned that the fleabane would take over, but we wondered whether it was one of those “boom and bust” episodes so common to recently reverted land. But I don’t think any of the suggestions about how to “manage” the fleabane would be acted upon. This is because Charlie is determined to make as few interventions as possible. Under law he has to pick ragwort from a strip around the estate border, to appease his neighbours. Otherwise everything is left to nature, under the influence of all those grazing animals. Charlie was really interested in what would happen – not deciding what was going to happen then steering the ecosystem towards that goal. I would still like to see a beaver family or two. 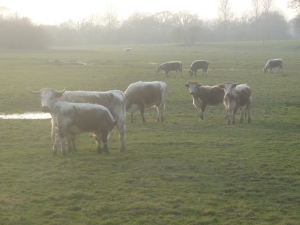 I led a discussion after the tour, about re-wilding and what is means and whether it matters. Naturally we talked about predators and trophic cascades, ecosystem engineers and invasive exotics. Some of the NE experts just couldnt make the leap beyond prescriptive, target-driven conservation, to the exciting world of emergent properties. Many did though.

Charlie receives Single Payment and HLS on the re-natured land, which adds up to enough to make the thing profitable – remarkable when you realise that farming it intensively made a loss, even including SPS income. The project has freed up half a million square feet of redundant agricultural buildings which are now being used by small businesses. 200 people now work on the estate – far more than have been employed in agriculture there, probably since before the first world war.  Without HLS and SPS the equation would change and that is frightening possibility.

One of the reasons is that the most innovative elements of the  New Environmental Land Management Schemes (NELMS) are being strangled at birth by the Rural Payment Agency. They are telling Natural England that those options whose outcomes require more than the cognitive abilities of a five year old to measure, (or preferably someone sitting in an office looking at a satellite image) are not verifiable and therefore the European Commission will disallow. This means we could end up with a completely dumbed down set of agri environment options and imaginative schemes like Charlie’s would never see the light of day.

Secondly the RPA are becoming more and more anal about what constitutes eligible land for SPS. One farmer friend has had tiny field corners with valuable emergent scrub mapped as ineligible by RPA and for a couple of hundred pounds fine, their entire SPS payment has been stuck in the system for 7 months. Charlie told us one year 3% of his SPS was with-held, then it was returned the following year, only to be with-held, then returned again. This is presumably because one person looked at a satellite image and decided they could see grazeable sward underneath, while the following year another could see no grass, so no payment. Neither understood that cattle,especially hardy breeds, will happily strip the bark off scrub in the winter. I guess they didn’t disallow the areas under ungrazed fleabane though. Madness.

Still, at least under the new CAP rules we will see the back of the notorious GAEC 12 “encroachment of unwanted vegetation” rule; and hopefully the equally crazy 50 trees rule has also been put in the dustbin of wacky agriculture subsidy rules; issues I have written about on many occasions.

I would like to see a Knepp or two in every county of England; in addition to really large scale projects (10,000-50,000ha) where predators could also be introduced. When you consider that Knepp is delivering nearly 1500ha of new dynamic high quality wildlife habitat, providing that dynamic mosaic of habitats about which so many get so excited (rightly), why are we spending so much on arable field margins?

UK conservation professional, writing about nature, politics, life. All views are my own and not my employers. I don't write on behalf of anybody else.
View all posts by Miles King →
This entry was posted in agriculture, biodiversity, carbon storage, Common Agricultural Policy, ecosystem services, grazing, landscape dynamics, rewilding, scrub and tagged Agriculture, biodiversity, common agricultural policy, Conservation, re-wilding. Bookmark the permalink.

7 Responses to No targets and prescriptions – Conservation: The Knepp Way