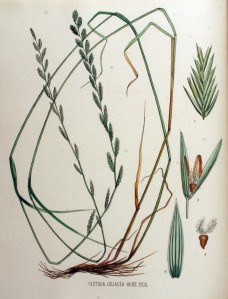 I was intrigued by this headline in Farmers Weekly (where else?) – “£2.5M boost for grass that helps prevent floods“. What can it be? A panacea for all our flooding problems – is it superabsorbent? Is it a climate change buster? Yes – it’s Festulolium. Huh? I hear you grunt over your toast and tea.

Yes – Aberystwyth University – to be precise IBERRS, which I believe has evolved from IGER the Institue of Grassland and Environmental Research (a euphemism if ever I heard one – but that’s another story.), has landed a couple of million to research into the benefits of sowing Festulolium to combat flooding, reduce soil erosion and soil compaction. It really is a Supergrass if you believe this hype.

What is Festulolium? According to IBERRS it’s a swarm of natural hybrids formed when Lolium perenne, our ubiquitous agricultural grass Perennial Ryegrass; and Festuca pratensis, Meadow Fescue. In the sense that both Lolium and Festuca pratensis are native, it’s true that Festulolium is a native hybrid. It is disingenuous though to suggest that Festulolium is a common native now. In fact native perennial ryegrass is difficult to find these days, as the agricultural cultivars are everywhere and there is so little grassland with native grass in it. No, Festulolium is just another highly bred agricultural grass. IBERRS make some bold claims about it wondrousness. Festulolium achieved a 51% reduction in run-off compared with other grasses grown alongside. Without finding the details of the research (if indeed they are accessible) I would imagine the “other grasses” are Rye grass cultivars. I would be more interested to see how the soil run-off compared against a mix of native grasses, flowers and shrubs, let alone a native woodland ecosystem or bog.

Perhaps the thing that made my alarm bell ring was this paragraph “Many river catchments are upland grasslands predominating in the wettest areas of the UK, say scientists. They believe if the rates of surface run-off could be reduced and rainfall captured more effectively by grassland soils, then the worst impacts of heavy rainfall down-stream may be reduced.”

The implication is that Festulolium could or should be sown in the uplands. The very act of sowing an agricultural grass involves cultivating the soil (leading to soil erosion, compaction and err run-off.) Plus to get the grass growing properly would involve application of artificial fertiliser, herbicide and doubt Bayer would find some reason – killing slugs perhaps (ah yes big fat profits – that’s the one) to develop a Neonicotinoid-based ubuiquicide that absolutely had to be used on this new crop.

The beauty of this approach is that it avoids having to tackle the effects of other grasses – such as Maize,  on which George Monbiot has just written further and better.

It also shows how the concept of ecosystem services is so vulnerable to coruption by Agro-Industrial Technofixes.

UK conservation professional, writing about nature, politics, life. All views are my own and not my employers. I don't write on behalf of anybody else.
View all posts by Miles King →
This entry was posted in agricultural pests, agriculture, ecosystem services, flooding, grasslands, Neonicotinoids, public goods, Uncategorized and tagged Agriculture, ecosystem services, flooding. Bookmark the permalink.

3 Responses to The Supergrass that betrays real Environmental Goods