Lost in the drainage Maize

I wrote this blog twice yesterday but both times wordpress refused to publish it. I’m trying again – third time lucky. I now know the reason it crashed. I was trying to copy a map from a pdf and upload it into the blog. I have now managed to do it. 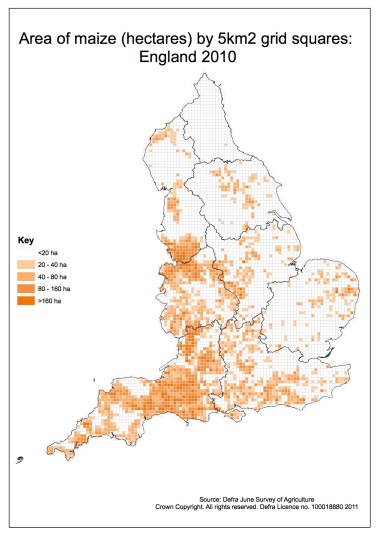 this is the culprit. It’s a map showing where Maize is grown in England. Maize is a relatively new crop for us. In 1970 only 1400ha was grown. Now its 160,000ha, mostly to feed to cattle, and mostly to dairy cows. 10% of the crop is grown to fuel biogas plants. There’s a generous subsidy from the Government to produce biogas as a low carbon fuel. This is acting as an incentive for farmers to rent out their land to contractors who will do everything needed and ctake away the crop at the end of the season, cash on the nail. The biogas maize contractors have a vision  – to see 200,000ha of England covered in biogas maize by 2040.

Maize is a high energy crop, but it also has a large environmental footprint. Maize tends to be grown on the same fields, year after year. Large quantities of  fertiliser are applied (up to 500kg/ha), as well as herbicides and other pesticides. Even the official Fertiliser Manual notes that Maize production can lead to Nitrate and Phosphate entering local watercourses.  Maize is a warm climate grass and needs a lot of help growing in our climate. In the past the most popular herbicide used on Maize crops was Atrazine, which has been banned for the past 8 years in Europe. Atrazine is a persistent organic pollutant (POP) and an endocrine disruptor. It’s still widely used in the US. Other herbicides are now used on Maize in England. Perhaps most significantly for our story, after Maize is harvested (which can be as late as October), the stubble is left overwinter, and not ploiughed in until the following Spring. This means soils are left uncovered during the Autumn and Winter, when they are vulnerable to heavy rains creating soil run-off. Very fine particles of soil are washed down slopes from maize stubble fields into nearby streams and eventually rivers. They take some fertiliser and pesticide chemicals with them and deposit silt and agrochemicals in downstream rivers.  Whether you agree that the Parrett and Tone in the Somerset Levels need dredging or not, the silt there has left the catchment of those rivers, and one prime source is maize fields. Inspect that pesky map from Defra – look at how much Maize is grown in Somerset, Dorset and East Devon. And wonder where that other 200,000ha might go, if the Biogas Maize boys get their way.

The Night of the Long Knives

The knives are out for the Environment Agency and its outgoing chair Chris Smith. It’s easy for Tory backwoodsmen like Ian Liddell-Grainger to call for his head when they know he’s leaving anyway in the Summer, after 2 terms at the helm. The Tory apparatchiks have smelt blood – Con Home ran an opinion piece calling for the EA to be dismantled; and the Telegraph called for landowners and farmers to be given the responsibility and power to drain the land themselves.

And that has worked so well in the past hasn’t it? For 40 years after the war land drainage was controlled by Internal Drainage Boards. These were small groups of local landowners and farmers who received funding from central government, and a levy on all landowners, to spend draining land. They acted enthusiastically, dredging rivers, canalising brooks, deepening ditches and drying out the land. They succeeded in destroying a great deal of wetland wildlife habitat. When conservation tried to protect special wet places against the marauding IDB’s, this led to some of the most famous conservation battles of our times. Halvergate Marshes on the Norfolk Broads, over 5000 acres of marshland, was to be drained by the IDB. It was a combination of the Countryside Commission, Friends of the Earth and the NCC which successfully stopped this despoliation. At around the same time effigies of NCC chairman Sir Raph Verney and local NCC staff were burnt on the Somerset Levels for trying to stop the continuing destruction of the Levels’ wildlife in the name of intensive farming. Since the advent first of the National Rivers Authority, then the EA, landowners’ enthusiasm for drainage has been curtailed; even the surviving IDBs have transformed into custodians both of the farmland and also the environment.

Call me a cynic but I see the NFU and CLA quietly orchestrating these mostly unfounded and certainly misguided attacks on the EA, as a way of rolling back the regulation that has redressed the balance between intensive (unsustainable) land use and the environment sensu lato.

Instead, as I suggested on Monday, we need to look at the whole catchment, not just the floodplain, for solutions to flooding.

No-one seems to have noticed, but Natural England and the Environment Agency have been working together quite well for the past 7 years or so, on a project called Catchment Sensitive Farming. Advisors visit farmers and discuss ways that things like Agri-Enviroment funding (plus a small pot of their own for capital works) can be used to reduce the impact of intensive farming systems (like dairy) on the whole catchment. It could be rolled out much more widely, given a whole load more powers, and do some real good for a change. Better than just letting the farmers get on with it, as Owen Paterson wants to do.

UK conservation professional, writing about nature, politics, life. All views are my own and not my employers. I don't write on behalf of anybody else.
View all posts by Miles King →
This entry was posted in agriculture, deregulation, Dredging, Environment Agency, farming, flooding, Owen Paterson and tagged Agriculture, flooding, IDBs, Maize, Owen Paterson, Somerset Levels. Bookmark the permalink.

32 Responses to Lost in the drainage Maize