Return to “Any Room for Scrub?” 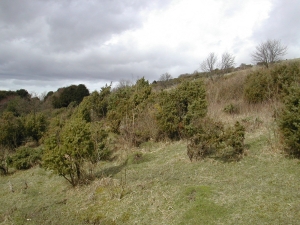 While I may be painted by some as a reactionary fighting against the forces of progress (in the form of the re-wilding movement), I have been thinking about this stuff for quite a long time. Reading George Monbiot’s rant about the Lake District in today’s Guardian, reminded me that about 12 years ago I wrote an article for ECOS in the middle of the Foot and Mouth Disease Crisis. This was at a time when George was staunchly defending the smaller (upland) farmer against agro-industrial hegemony. How things change.

Any Room for Scrub?

As the Foot and Mouth Crisis stubbornly fails to yield to the Government’s containment policy it is timely to consider whether this is an opportunity to restore upland landscapes to a balance of habitats, including grasslands, heathland and scrub. Is scrub so bad?

Scrub – the very word strikes fear into the hearts of gentlemen, farmers and anyone who really “cares”  about the countryside….Conservation Volunteers cut the nasty spiny stuff down to protect the last scraps of southern England’s former downlands from the ever encroaching tide. Meanwhile Lottery millions are spent clearing birch, gorse and pine scrub off lowland heathlands as part of the Tomorrows Heathland Heritage project. And all to the good – scrub encroaches onto land of high nature conservation value, such as unimproved lowland grassland, lowland fen, or lowland heathland and replaces a high value habitat with one generally of lower value for wildlife.  It’s also true to say that in these contexts a small amount of scrub is a good thing – where would the Dartford warblers be without gorse brakes? Would the Duke of Burgundy butterfly disappear without the southern mixed scrub on limestone? With undergrazing as the main management problem of grazed lowland habitats at the moment, it is fair to consider scrub, having the upper hand, as in need of control. It may surprise some though to learn that lowland Hawthorn scrub may be an international important habitat in a European context (see JNCC report “The nature conservation value of scrub”).  Incidentally, I sit writing this in the heart of the Dorset chalk, having spent time last year organising scrub control  on downland SSSIs – and yes, since you ask, it is all growing back vigorously.

What about the uplands?

Amidst the sturm und drang that was the media reportage of the Foot and Mouth crisis, it was with little surprise that NFU officers were heard baying at the moon of scrub encroachment and land abandonment in the hills of Cumbria. More worryingly, Lake District National Park officers and National Trust Land Agents joined in this particular wave of scrub-induced paranoia,  barking that the very ecology of the Park was under threat from Foot and Mouth – not the virus itself –  the threat emanated from scrub growing as a result of a reduction in sheep, those beasts who toil tirelessly to maintain and protect the wonderful landscape of the Lake District. Where were the voices of English Nature, or the voluntary sector, stating that overgrazing – by sheep – was probably the most significant threat to the ecology of the Lake District – and that an increase in scrub would actually be of great benefit to the area’s biodiversity. Well, to be fair they were not heard this far south in the country, but no doubt they were heard at a more local level. The national media displayed all the naivety that one really expects these days, swallowing the NFU/MAFF (RIP) /agro-industrial complex propaganda  hook, line and sinker. Step forward balanced reporting and….take a back seat for a while will you, just till the election….

A host of orange kagouls

As David Harpley mentioned in passing in ECOS 22(1) the Lakeland landscape Wordsworth knew was not one where the fleeced foragers were king, and billiard table grasslands dominated the fells. The Lake District was as much an industrial landscape as an agricultural one, with all the intricate mosaic of habitats and land-uses one would expect from so many competing land-uses. And of course it was a peopled landscape, not one where contemporary  players of “Spot the Human” are rewarded only with views of kagoul-clad ramblers or struggling farmers, rounding up sheep on quad bikes, ready for slaughter. Those pre-ranching hills supported fell sheep (the famous hefted Herdwicks among them) and upland cattle and of course working ponies (industrial strength).  They also supported coppice woodland and scrub. Scrub existed on those hills long before sheep, long before agriculture of any kind.  Indeed, scrub had economic value, providing forage and shelter for animals, firewood for domestic and industrial use, bracken for bedding, fruit and nuts for food (especially during hard times).

Gradually, and with acceleration during the last couple of decades, sheep numbers have increased on the Fells at the expense of other habitats, particularly upland dwarf shrub heath, upland scrub and upland woodlands (for a detailed analysis see English Nature’s report “State of Nature –the Uplands Challenge”). This process has been driven by the CAP through the EU sheepmeat regime, particularly the Sheep Annual Premium Scheme (headage payments), which pays hill farmers to stock to ecologically unsustainable levels. The sheep nibbling has effectively transformed a mosaic of habitats into a vast area of species-poor acid grassland. No room for the Black grouse, which depends on heather moorland, and no room for Juniper, which is an integral component of upland scrub.

So, with Foot and Mouth now (mid-June) in decline until next Winter (?), with just the odd hot-spot flaring up here and there, and with MAFF consumed by DEFRA the new Department of Environment, Food and Rural Affairs (whither the urban/suburban environment one might be tempted to ask), is there the slightest chance that this opportunity to restore the Lake District to a more environmentally rich landscape will be taken? Probably not, is my undeniably cynical view. Scrub in general is not afforded the priority it deserves within conservation circles, so how can it possibly be given credence elsewhere? If the Lake District National Park Authority cannot appreciate that  Juniper scrub is hanging by its finger nails in its last English stronghold, and continues to decline, thanks in the main to overgrazing by sheep, is there any likelihood that the situation will be reversed?

This could be a great opportunity to restore the upland landscape with a combination of low intensity pastoralism and habitat restoration. I am not arguing for a return to wilderness, wildscapes, wild land or natural land in the Lake District. My argument is for a tilting of the balance away from sheep ranching, through reform of the subsidy system. No doubt others will provide more detailed proposals for fundamental reform of the hill farming subsidy system (see Geoffery Sinclair’s article in this ECOS). Whatever these mechanisms may be, the outcome should be a significant net reduction in grazing pressure on the upland fells. Grazing is an essential component of the upland landscape, but the maximum gain (social and ecological) will come from a move to low intensity grazing by hefted sheep, hardy traditional breeds of cattle and perhaps ponies too. After all those consumers still eating meat increasingly want quality not quantity, and more of them than ever want their food to come from sources where ecological and social damage are not part of the product. And if all this means paying more for our meat, then we should remember the true cost of cheap meat on the supermarket counter.

What would we get with this reduced level of grazing? Well, one issue which will need addressing is the ubiquity of mat-grass Nardus stricta. This grass has benefitted from many years of intensive sheep grazing and has replaced much heather moorland, upland scrub, wetlands and other more species-rich grassland types. With reduced grazing pressure, mat-grass may dominate without intervention. Mechanical clearance or controlled burning may be necessary in some places. Elsewhere, where dwarf shrub heath still persists, and in rarer cases where juniper scrub survives, these habitats should slowly return on their own. Juniper seems to depend on changes in grazing pressure (such as Myxomatosis in the 1950s) to provide opportunities for seedlings to get established; germination and initial growth of seedlings depends on grazing to create a short sward, but seedling and adult junipers suffer from damage and often death by being browsed and grazed (Wilson and King, 2001).

All this restoration will create employment and require funding. Perhaps the farmers who will be looking to leave sheep farming, or reduce their flock sizes could be funded through the rural development programme to work with the National Park Authorities, English Nature and the voluntary sector on this large-scale habitat restoration. These are the people who have the greatest local knowledge, who know where the best sites for habitat restoration will be and the techniques needed for that restoration.

While the heartbreak of the mass culls, pyres and families losing their livelihoods will love long in our memories, this will hopefully prove to be a turning point where upland landscape restoration starts, with a little bit of scrub.

Wilson, P and King, M.P. (2001) A report on progress with implementation of the Species Action Plan for juniper Juniperus communis  during 2000-2001. Plantlife, London.

6 Responses to Return to “Any Room for Scrub?”